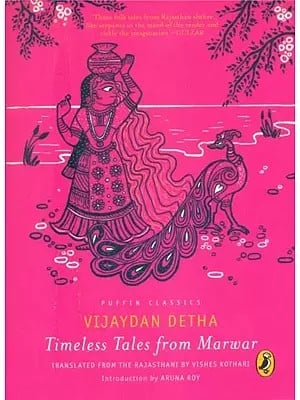 FREE Delivery
$25
Quantity
Ships in 1-3 days
Notify me when this item is available
Back of the Book
For centuries, Rajasthan has been a gold mine of oral traditions and histories with Padma Shri Vijaydan Detha being one of the foremost storytellers of all time.

Timeless Tales from Marwar gives a new lease of life to his folk tales. It is a hand-picked compilation from the much-celebrated Baton ri Phulwari -'Garden of Tales'-a fourteen-volume collection written over a span of nearly fifty years.

Retold in Detha's magical narrative style complete with imagery, this selection offers some of the oldest and most popular fables from the Thar Desert region. Discover tales of handsome rajkanwars, evil witches, exploitative thakars, miserly seths, clever insects, benevolent snakes and more. Vishes Kothari's vivid English translation introduces one of the most venerated figures in Rajasthani folk culture to a wider audience.

Introduction
I want to share with all of you my joy of discovering Vijaydan Detha's collection of Rajasthani folk tales, the classic Batan ri Phulwari, produced as retellings in Timeless Tales from Marwar. Fondly known as Bijji, he introduced himself as a writer of stories. Behind those simple words lay a treasure trove of tales told in a unique and inimitable style. He was a chronicler of Rajasthani culture through its abundant and rich folklore. He used the magic of words to take us into a wonderland. When I opened Timeless Tales from Marwar, I walked into his enchanted land all over again.

I came to the villages in Rajasthan in 1975 and was surrounded by storytellers. I was delighted. Their stories are in the 'oral tradition: not written down but narrated. Every retelling adds textures, from one generation to the next for hundreds of years. I heard them with great interest but could not remember them all. There was no book I could refer to, till I came across Batan ri Phulwari.

Bijji almost stepped out of his stories. He wore a dhoti and a batari (a cross buttoned kurta), a pair of beautiful elegant joothis that adorned his feet, had two pens in his breast pocket, one green and one red. He was one of the wittiest and fun people I have ever met. He made me laugh and learn together.

His retelling of folk stories is simple but layered. They talk of different castes, the poor, of people who live in havelis, bastis, jhopris, across different time periods. He speaks through the sun, the stars, the clouds, the peacock and the raindrops during 'monsoon. The superiority of the tiger is cleverly undermined by the jackal, and the arrogance of the bad man is turned on its head by the poor man's intelligence.

We hear birds speak, while people have conversations with ghosts. Big ideas like poverty, untouchability and greed for wealth become simple. His style is witty. He uses satire, laughter and humor. 'Bijji makes the tale come alive-an attribute of a great writer. Although the stories are of days gone by, the messages are important for us even today. They are universal and for all time.