In the present work, an attempt has been made to present the problem of nature and destiny of man as envisaged by the outstanding Indain thinkers of the twentieth century. The problem is approached form a purely philosophical point of view. The contemporary Indian philosophers have generally not tried to create new and novel metaphysical systems. They have largely concentrated their attention in giving a new meaning and reorientation to classical Indian thought. But they show deep interest in the problem of man and his destiny. They do not make any significant and original contribution in understanding the nature of man and the structure of human personality. In this respect, they essentially follow the Upanisadic view of Man. But they have made certain significant and important contributions in the understanding of man's situation, his relation-ship with society and his ultimate destiny, as we have tried to show in the course of the present work. They hold fast to the ancient Indian view that it is of supreme importance to men to realise his eternal, immortal, blissful self and his unity with the Divine. But they also emphasise the necessity of man's all-round development in the different fields of secular life. They contend that the fulfilment of man's destiny does not lie only in the attainment of his liberation from the cycle of birth and death and his realisation of his eternal self and his unity with the divine but also in social salvation. The society as a whole has to attain freedom in the social, political, economic, cultural and spiritual sense. They show deep awareness of the fact that humanity to-day is passing through a critical period of its history. Materialistic attitude towards life is clouding man's spiritual vision. The adoption of materialistic attitude makes man ignore the real values of his life. The results is that man to-day feels insecure. The Indian thinkers seem to be acutely conscious of man's present situation and try to show him the way out of his insecurity that threatens his individual and collective life. This way essentially lies in the realisation of his inner divinity and spiritual freedom and in the cultivation of love and fellow-feeling for the whole of humanity.

I am well aware of the fact that there are other eminent Indian thinkers of this century, namely K.C. Bhattacharya, Dr. Bhagawan Das, J. Krishnamurti and Dr. Md. Iqbal who do not find a place in my present work. The reason for my confining myself to the study of the five thinkers as mentioned above was that I did not propose 'to make a study of Contemporary Indian Philosophy as such. I was concerned with the study of a specific problem and I found that the above-mentioned five thinkers represented the main tendencies and views of Indian thought, including contemporary Indian thought, so far as the problem of the nature and destiny of man is concerned. So, I though it fit to confine myself to these thinkers in order to be in a position to make a systematic, critical and comprehensive study of the important problem of the nature and destiny of man in the present book.

I offer my deep and sincere gratitude to my revered teacher Dr. R.S. Misra Rtd. Professor, Department of Indian Philosophy and Religion, Banaras Hindu University, whose kind guidance, valuable suggestions and constant help and encouragement enabled me to complete the present work. I derived enormous help from his valuable lectures on Con-temporary Indian Philosophy and also form his admirable work on Sri Aurobindo, - The Integral Advaitism of Sri Aurobindo. I am also greatly indebted to Dr. N.K. Devaraja, Rtd. Director, Advance Centre of Philosophy, and Banaras Hindu University, who took keen interest in my work, and encouraged me and helped me by offering valuable suggestions form time to time in connection with my work. I am also grateful to Shri Kishore Chand Jain, Bharatiya Vidya Prakashan, Delhi, Varanasi, who kindly accepted my book for Publication. 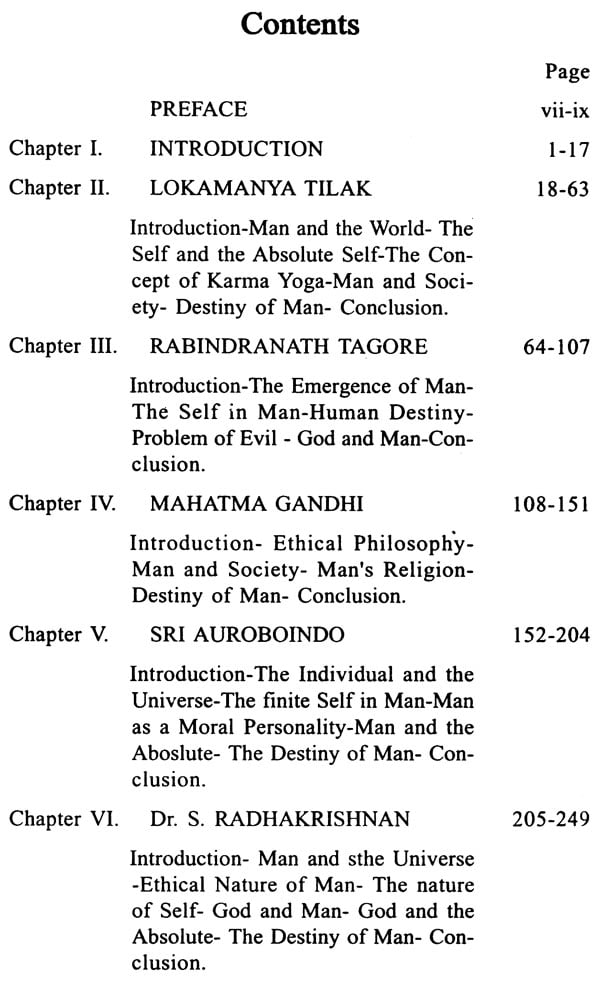 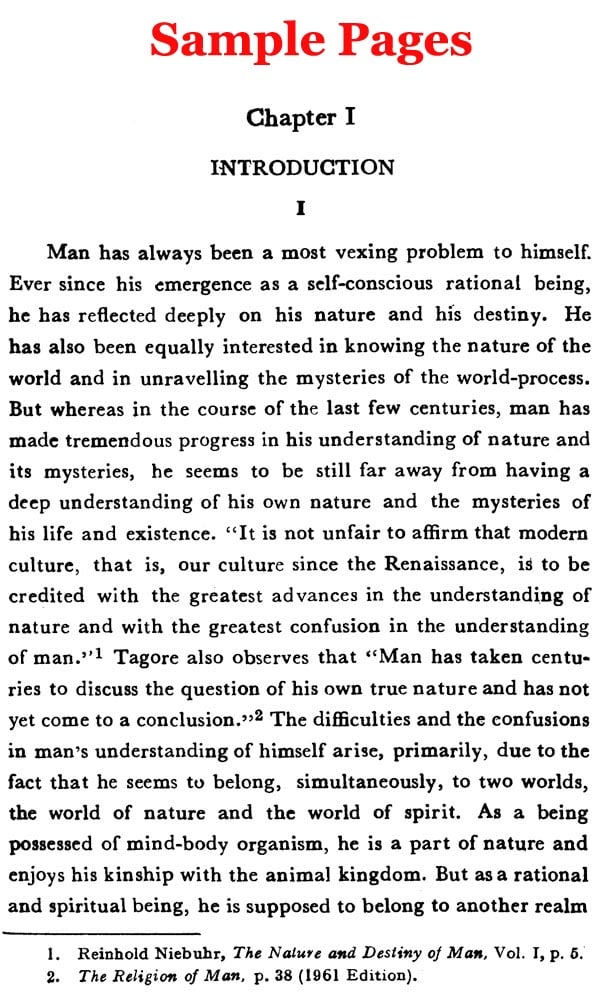 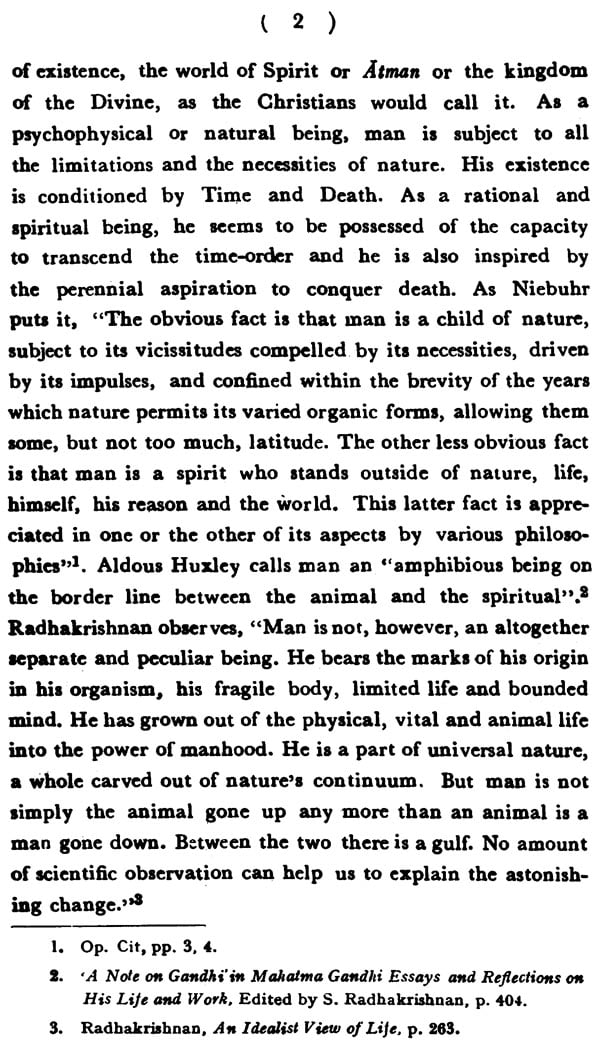 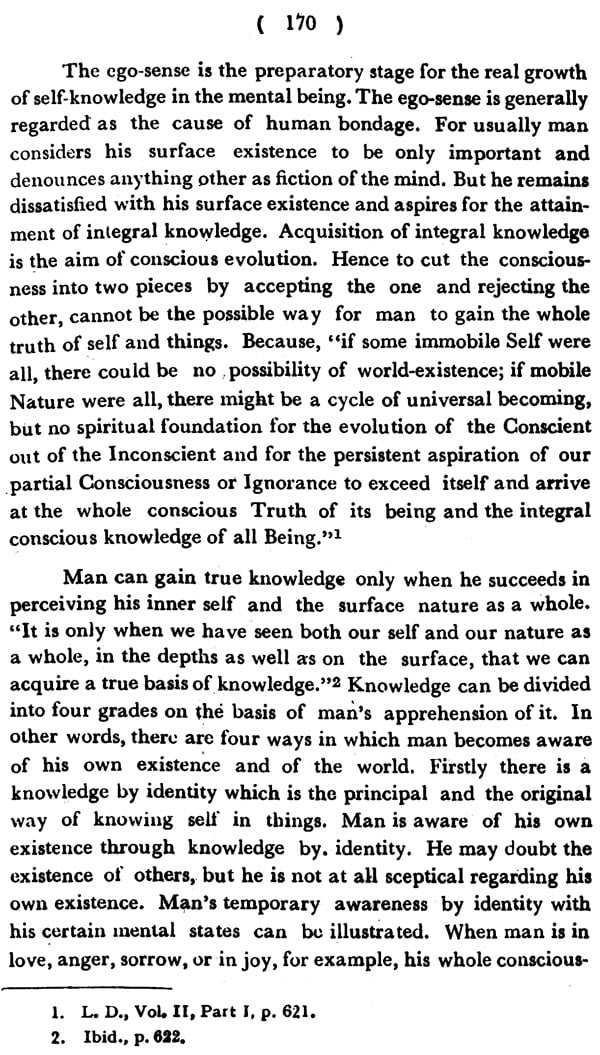 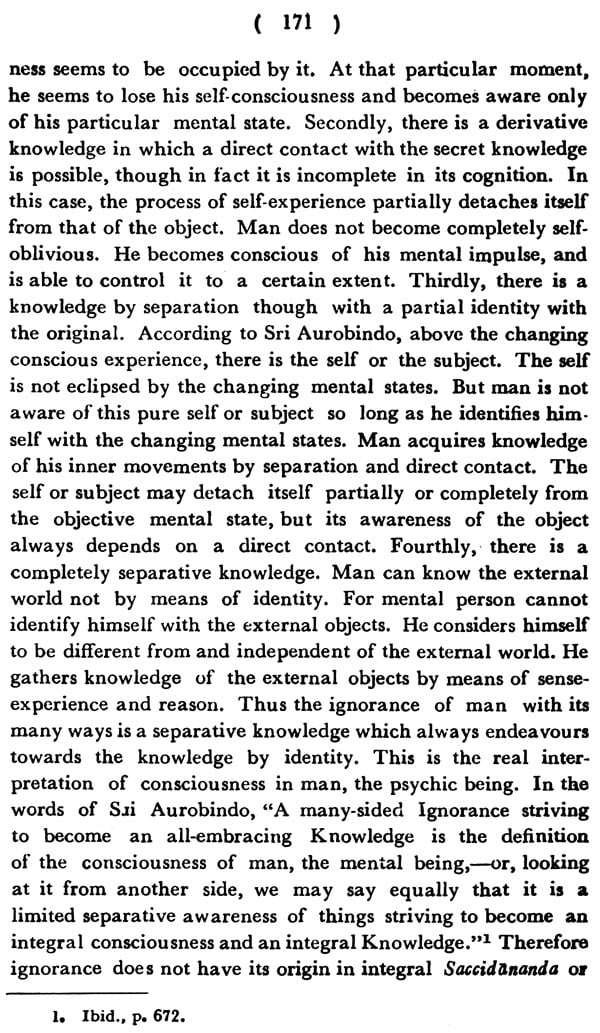 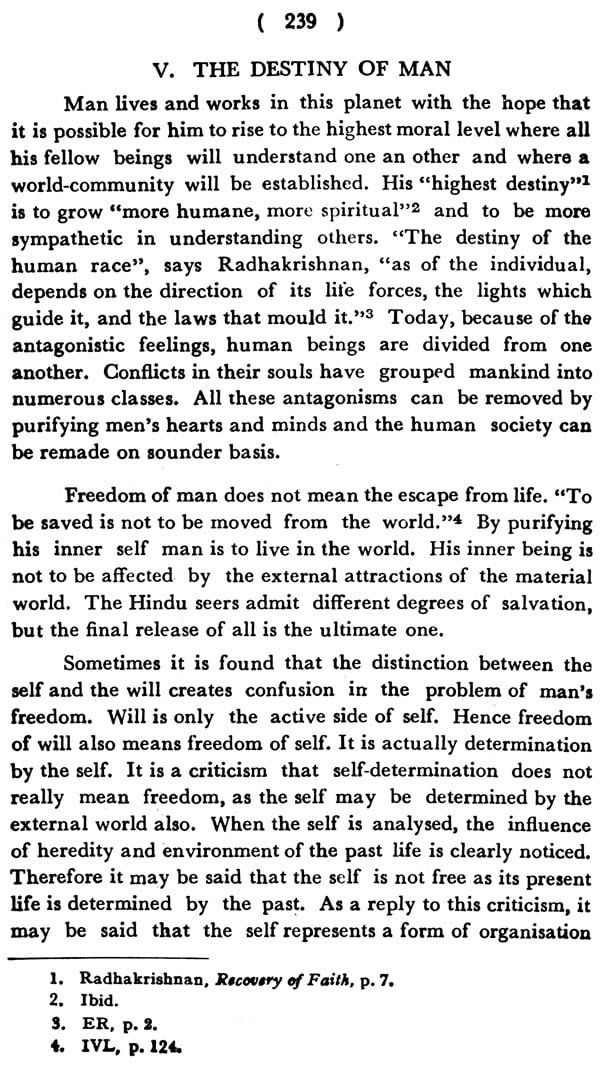 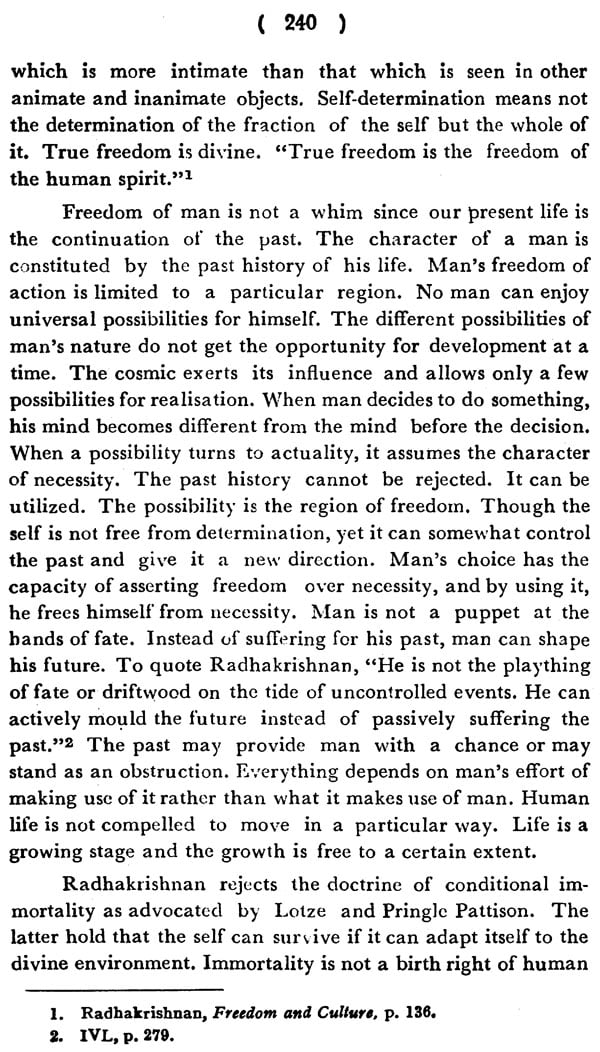 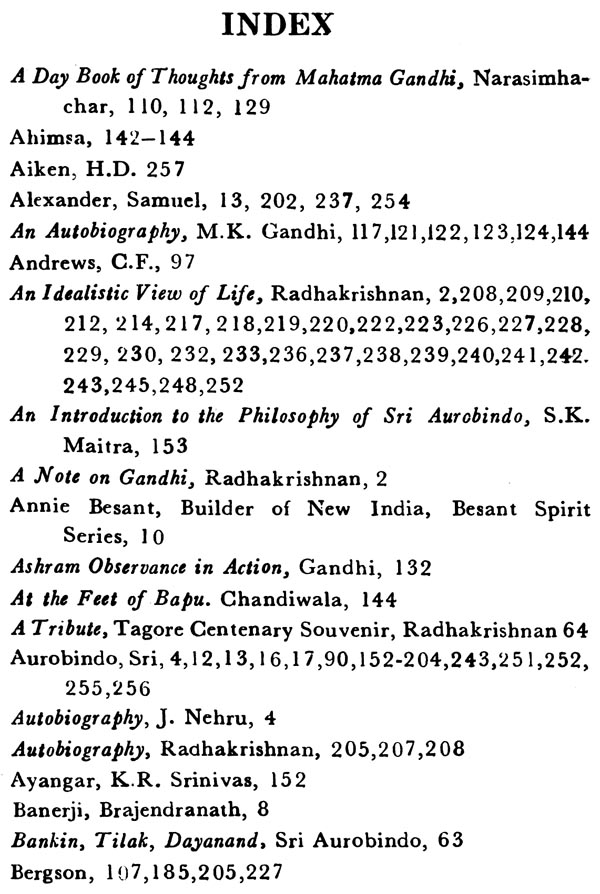 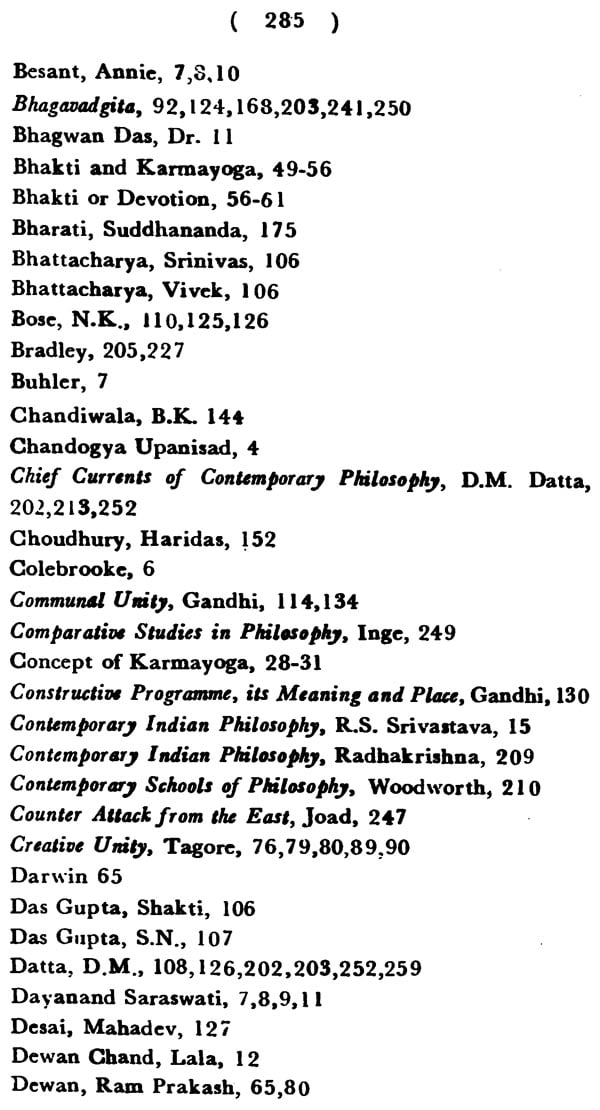