Vidyaranya's contribution to Advaita consists in the best possible reconciliation of the vital thoughts of several Advaita Schools of the post-gatikara period. His approach to Advaita is a blend of several currents that from Indian Philosophical thought that has entitled him to a lasting place in the history ofAdvaita.

Vidyaranya, though he strictly belonged to none of the three schools viz. Vartika, Vivarana and Bhamati respectively, in his interpretation showed great intellectual ability in amalgamating some of the so-called irreconcilable principles of these schools. But his propensity to the Abhasa school in the main flow of his interpretation is beyond doubt.

Dr. Satyadeva Mishra considers Vidyaranya to be the staunchest upholder of the Abhasa theory and is not sure of his partiality to other theories especially the reflection theory (Pratibimbavada) of the Vivarana-school.

The present work is a modest attempt to satisfy the need of such a full-length study of Vidyaranya and his great contribution to Advaita philosophy.

Dr. Joshi has been teaching Sanskrit and Prakrit at the Karnatak Arts College, Dharwad since 28 years. He has been enriching the field of literature by his good many research articles (more than 95) and many books in Sanskrit, English and Kannada. He has attended more than 55 National Seminars, Conferences and Panclita-Pariadas. He has secured 3 prizes viz. Munipunyavijayaji Prize, Dr. D.K. Jain research institute prize and Dr. V. Raghavan Prize in the All India Oriental Conferences held at Calcutta (1986) Rohtak (1992) and Jadhavpur, Calcutta (1996) for his three research articles in Prakrit and Sanskrit subjects. He was also honoured by the Vedavyasa Puraskara of the Brahmacaryagrama of Shekhavati of Bhivani (Haryana) for securing III Rank in the National Sanskrit essay competition (2000). He has secured VI Rank in the All India One Act Play competition in Sanskrit (2004) at Delhi Sanskrit Academy.

Undergoing the training in the staunch methods of Sanskrit learning given by Brahmagri Bhalacandragastri at Sri gatikaracarya Sathskrta Pathagala, Dr. Joshi bagged the Phatake Gold Medal in Vedanta. Going through the four examinations in Hindi viz. Prathama, Madhyama, Rastrabhasa and Pravegika, he passed the Sanskrit examinations viz. Kovida (=B.A.) and Kavya Chadamani (=M.A.). He completed his M.A. in 1972.

He did not put any stoppage to his research work even after securing the first Ph.D. on "Vidyaranya's Contribution to Advaita" but continued his research even to gain the second Ph.D. on "Drsti Srsti Vada- A Study" from the Poona University (1999). Guiding many Ph.D. candidates, he has served the P.G. Dept. of Sanskrit & Prakrit, Karnatak University as a Guest Lecturer.

He has many one-act plays and poems in Sanskrit to his credit and has given many programmes in the A.I.R. and T.V. His contribution to the field of Sanskrit is highly commendable.

Vidyaranya's contribution to Advaita consists in the best possible reconciliation of the vital thoughts of several Advaita Schools of the post-sankara period. His approach to Advaita is a blend of several currents that from Indian Philosophical thought that has entitled him to a lasting place in the history of Advaita.

Sri sankara, following his predecessors enlivened in his works the philosophy of the Veda and Vedanta through his fresh interpretation. Among' the followers of Sri Sankara Suregvara, Padmapada and Vacaspati Mika were associated with the three main schools viz. Vartika, Vivarana and Bhamati _respectively. Adding some new facets to the interpretation of Sri Sankara's cryptic statements they gave room to some new currents of thought in their works. Most of the successive Advaitins leaning towards one or the other school enriched the Vedantic literature by their valuable contributions augmenting some new facets of thoughts through their own new interpretations. Vidyaranya, though he strictly belonged to none of these schools in his interpretation showed great intellectual ability in amalgamating some of the so-called irreconcilable principles of these schools. But his propensity to the Abhasa school in the main flow of his interpretation is beyond doubt.

Dr. Satyadeva Mishra considers Vidyaranya to be the staunchest upholder of the Abhasa theory and is not sure of his partiality to other theories especially the reflection theory (Pratibimbavada) of the Vivarana-school. He says Vidyaranya and Anandagiri both are the staunchest supporters of Abhasa. But M.M. Vasudeva Shastri Abhyankar, in his introduction to Siddhantabindu (cf. p. 18) asserts that Vidyaranya has totally accepted the Pratibimbavada" .1 But in course of the forthcoming chapters it is shown in clear terms not as the 'staunchest' advocate of the abhasa theory but as a close adherent of the Pratibimbavada as well as shades of some other theories. However, this much is impeccable that unlike the Vivarana school he holds the reflection to be unreal. This does not mean that his disagreement with the Abhasa theory on some points has ceased. This is because, he does not agree with the concept of self (Java) to be the appearance of appearance namely Igvara (Cidabhasa), behind the curtain of Avidya as held by Suregvara. I Thus, his novelty in the approbation of the concept of individual self to be the reflection (Pratibimba) of Cit as held by the Vivarana-school and the falsity of reflection as approved by the Vartika-school may be characterised as his significant arriere-pensee. It is a tenuous point of immense significance that has acted as a hyphen between these two theories which have developed into two independent schools. To a great extent Vidyaranya's approach to Advaita is syncretic.

Before appreciating his contributions, we may conceive of the scope that was available to Vidyaranya, for his contributions in the field of Vedanta. Three magnificent schools had already secured then high ranks in the early, history of Advaita. The renowned Advaitins like Vimuktatman, SrTharsa, Citsukha and others had left no facet of Advaita thought untouched and unshaped, to which a successive Advaitin would contribute an out and out original theory of his own. Even the dialectical approach was not anew by that time. In this environment, Vidyaranya introduced many a new device that serves as an easy passage to arrive at the Advaitic verdicts and goal, theoretically and practically, thus constituting his unique contributions in the field of Advaita Vedanta. The salient features of Vidyaranya's contributions which are, traced below, show his synthetic approach to the important philosophical issues of Advaita. These features are discussed in the forthcoming chapters.

(1) Avidya, though it has Brahman for its locus plays its role out and out on the individual self (jivapaklapatini), and for the same reason the individual-self too, may be considered to be .its locus (agraya).1 On this point Vidyaranya is successful in amalgamating the schools of Suregvara, Padmapada and Vacaspati Migra. Vacaspati Mira basing his thesis mainly on that of Mandana assorts the individual selves (Jivas) to be the locus of Avidya and avers its immunity from the defect of reciprocal dependence (anyony(draya) by admitting it to be of unknown beginning (artadi). Suregvara, on the other hand establishes Brahman to be the locus of vidya and advocates his Abhasa-theory. Prak'agatman too, following Padmapada defends this view. of Brahman to be the locus and the object of Avidya. At this juncture the logical justification offered by Vidyaranya to all these views manifests creditable synthesis.

(2) Developing the point of Mandana and Vaeaspati Mira in his own way Vidyaranya turned it towards the theory wherein esse is percipni (Drgisrytivada). In other words, the existence of the world is contemporaneous with perception (dars'anam-sr,stirucyate) like the world in the dream. It seems, Vidyaranya's exposition of this theory is largely influenced by Yogavasistha. At a later date (1500 A.D.) Prakasananda in his Vedanta-siddhanta-muktavali, attempted to bring into prominence the cultivation and the development of this theory in a dialectic frame. However;, as far as. its theoretical implication and the practical application are concerned, Vidyaranya dextrously states that this is highly edifying at a higher rung of discipline to a seeker of Truth, and even at a lower step this way of thinking aids the seeker much for his edification by infusing in his mind a sense of strong detachment from the dreamy world. In brief, according to Vidydranya, it is a shortcut method of discipline that brings forth the Eternal Bliss.2

(3) There is a need for accepting the positive Primordial-nescience (111filavidya) often called Maya; constituted of predominant-pure-illuminative quality (scuddhasattvapradhana). This is the adjunct of Igvara where as the adjunct of the individual self is Avidya that consists in the predominating impure-illuminative quality (malinasattvapradhana). Since, Maya and Avidya are the two aspects of Prakrti there is no plurality of nescience. Here, Vidyaranya, taking his stand from the thesis of Vivaranakara implies his inclination more towards the thesis of Suregvara than towards that of Bhamatikara. Suregvara asserts Avidya to be avicarita-siddha (existent due to lack of discrimination). and this according to Dr. C. Markandeya Shastri is not in the sense of anirvacaniya, (inexplicable)) If this is the case, Vidyaranya while proving it to be indescribable (anirvacaniya), unlike Suregvara takes his firm stand from the Vivarana view. But, there will be an occasion later to see how Vidyaranya brought the implication of this term i.e. avicaritasiddha of Suregvara to be indeterminable in his Vartika-sara. It is another piece of synthesis of Vartika and that of Vivarana on this point to his distinctive credit.

(4) The cessation of nescience, like knowledge is also not dependent on a person or his action (purusatantra); but it is dependent on entity (vastutantra). It, is not the immediate result of any effort, since it takes place by itself like knowledge. Ultimately, the cessation of nescience can be Tuccha from the point of realization. The efforts are only to bring out the antagonistic equipment to the nescience. 2

(5) The world is the creation of both Igvara and Rya. The creation beginning from 'desire' (Pcsana) of Igvara to the entry of Cit as jiva into the body belongs to the former and up to the liberation ranging from waking and other states is of the latter. 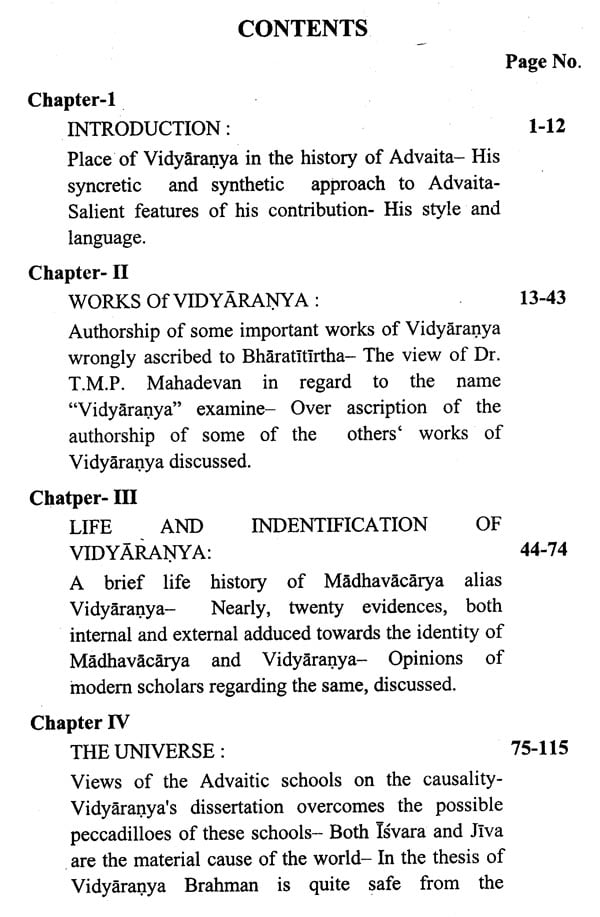 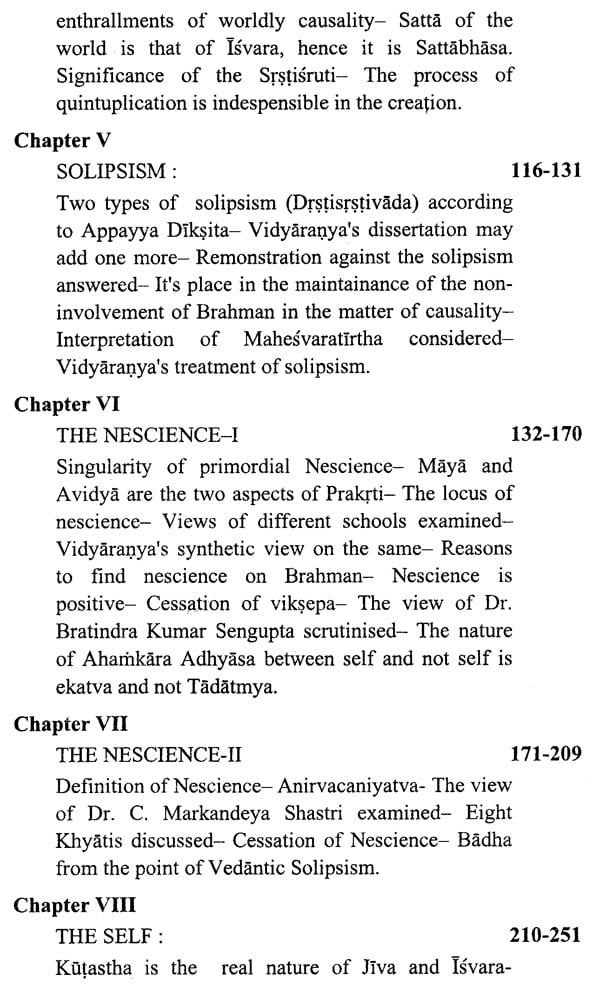 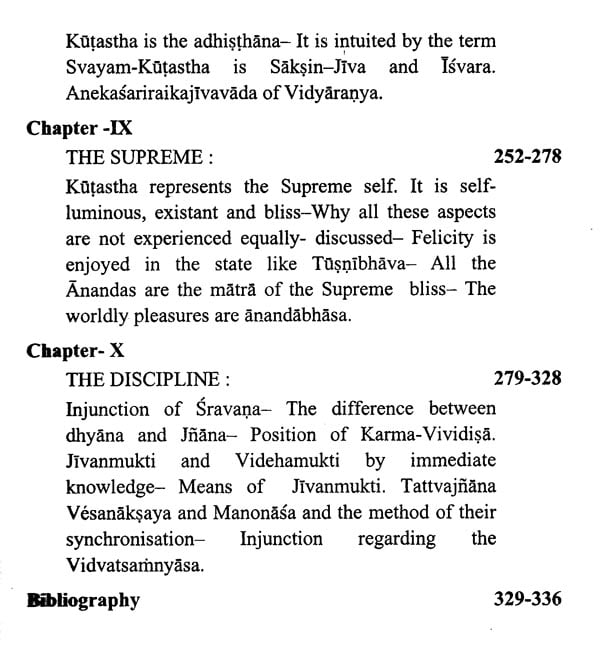 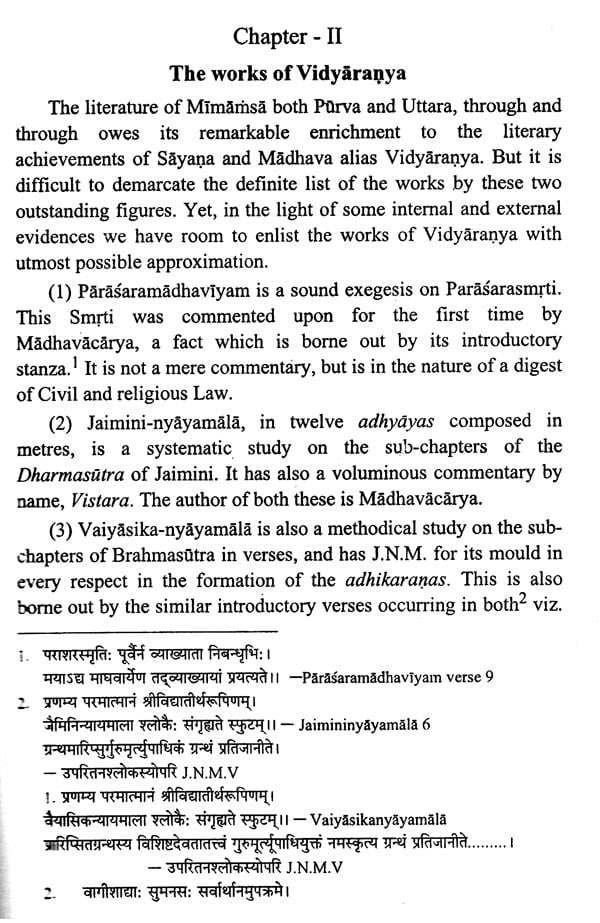 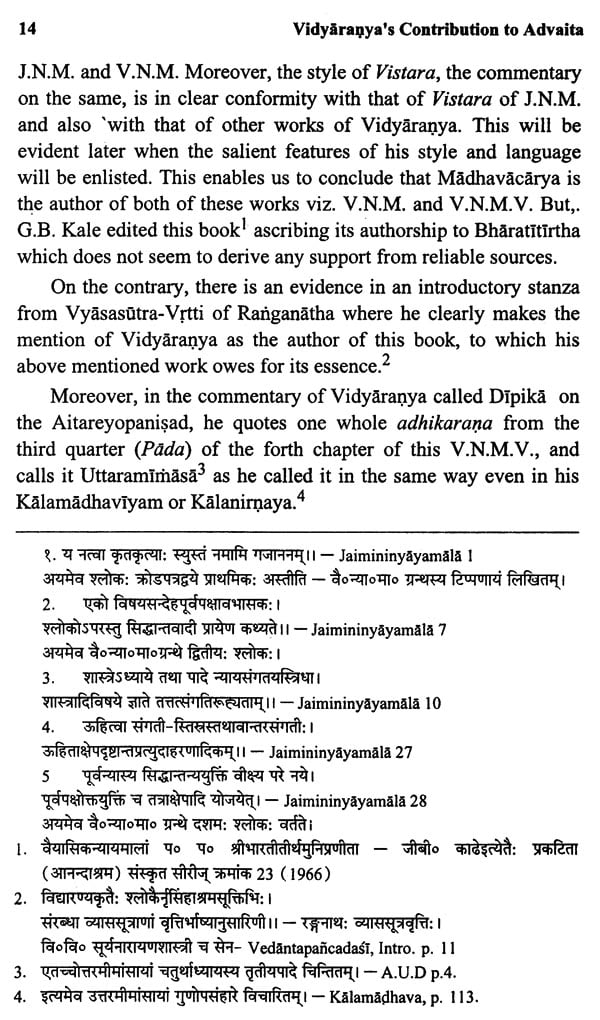 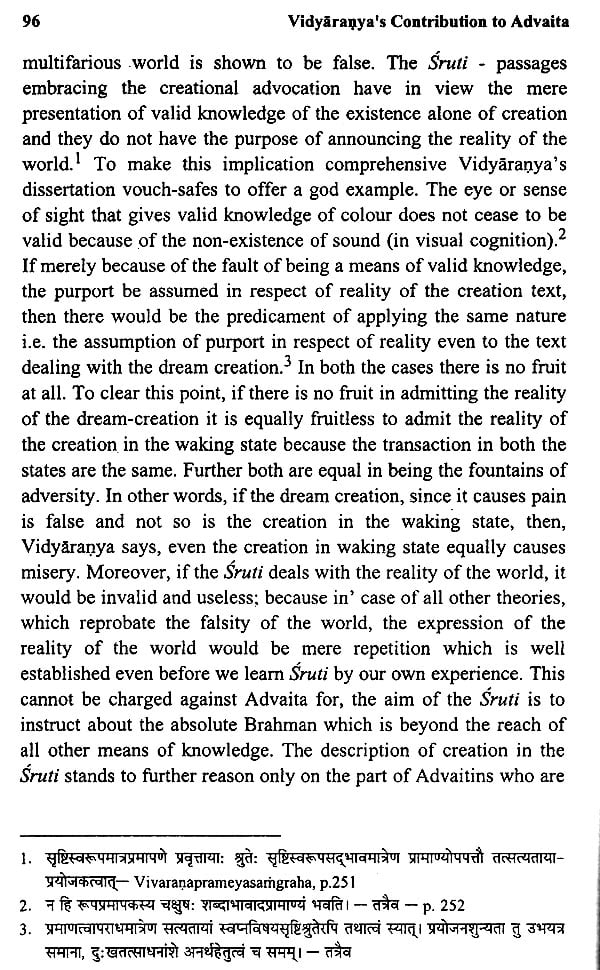 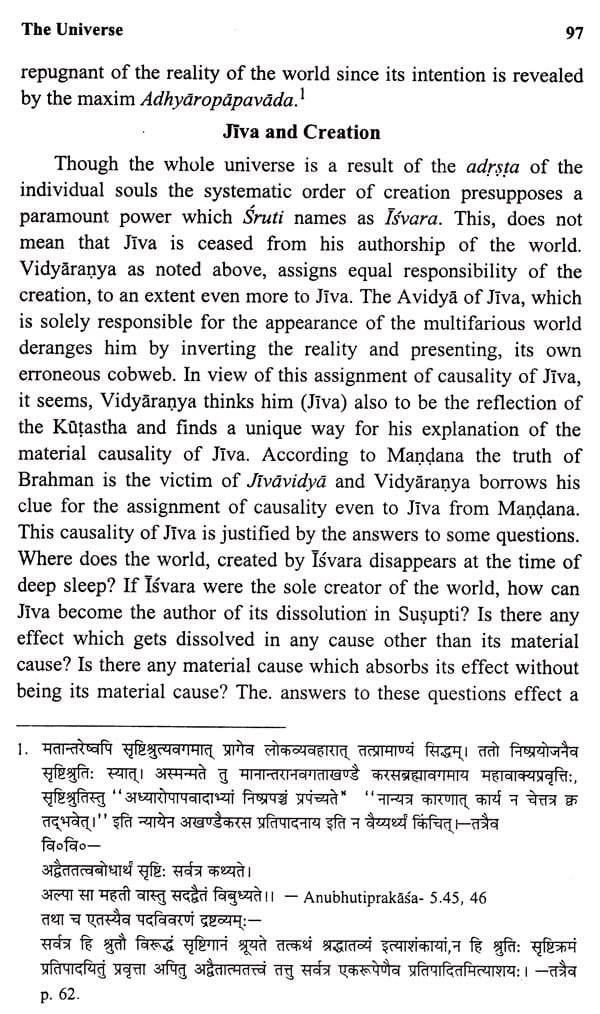 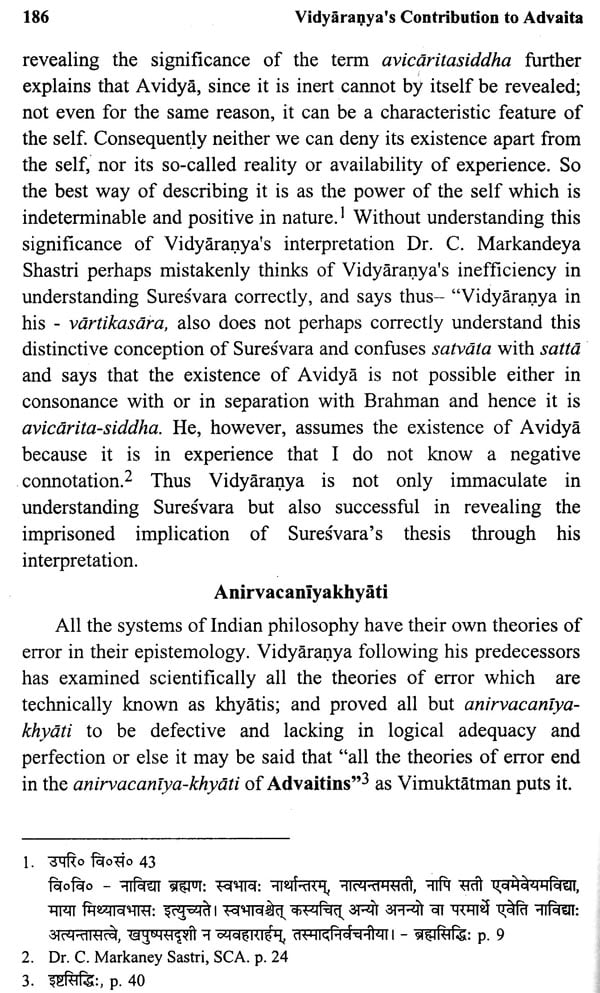 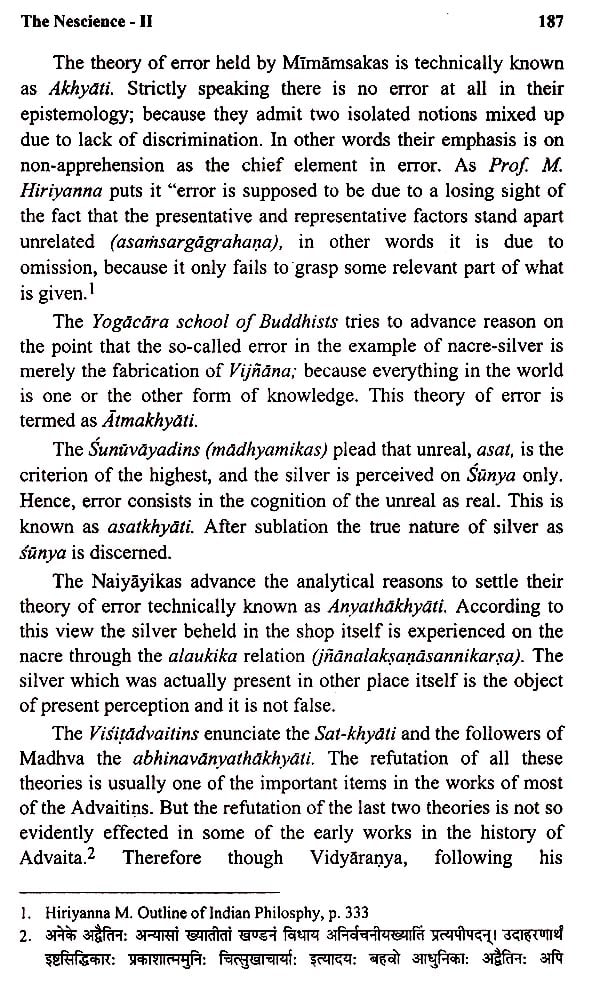 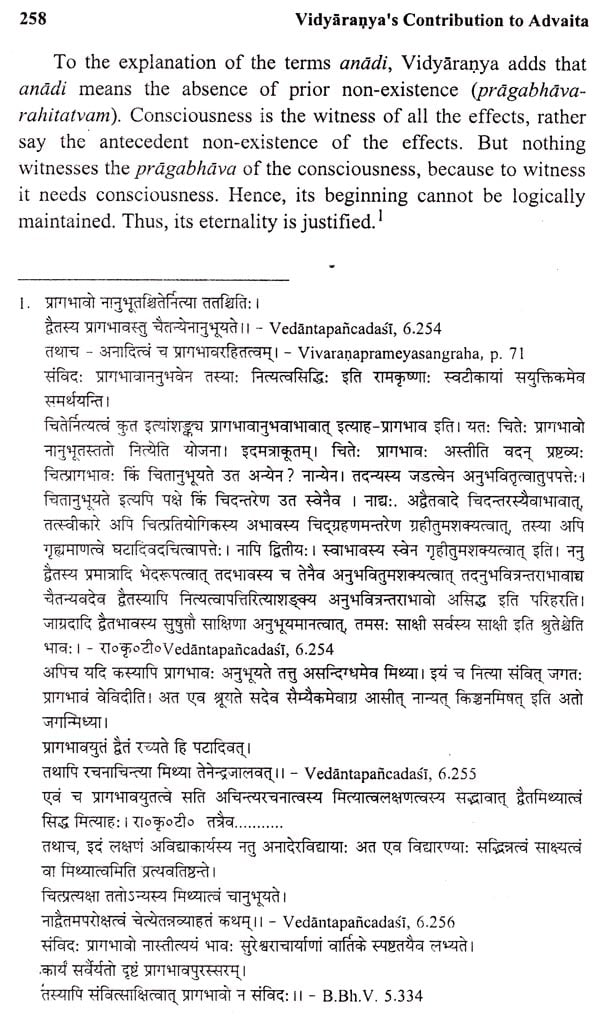 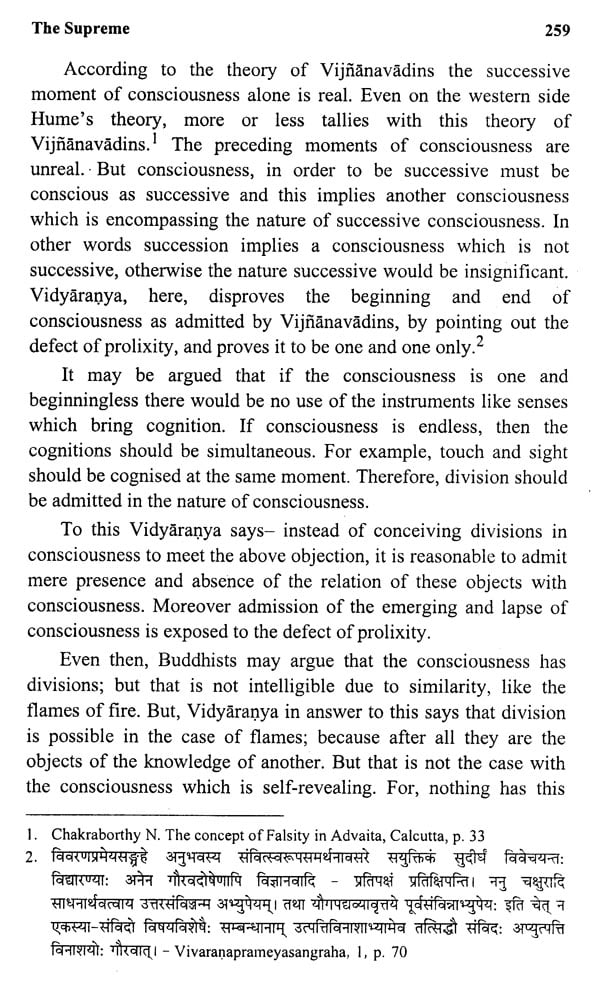 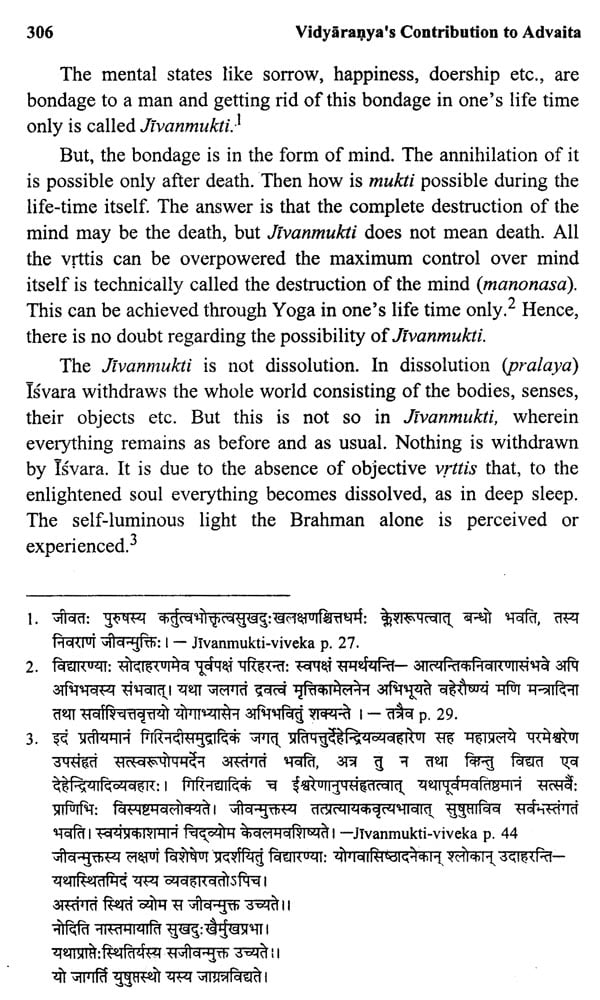 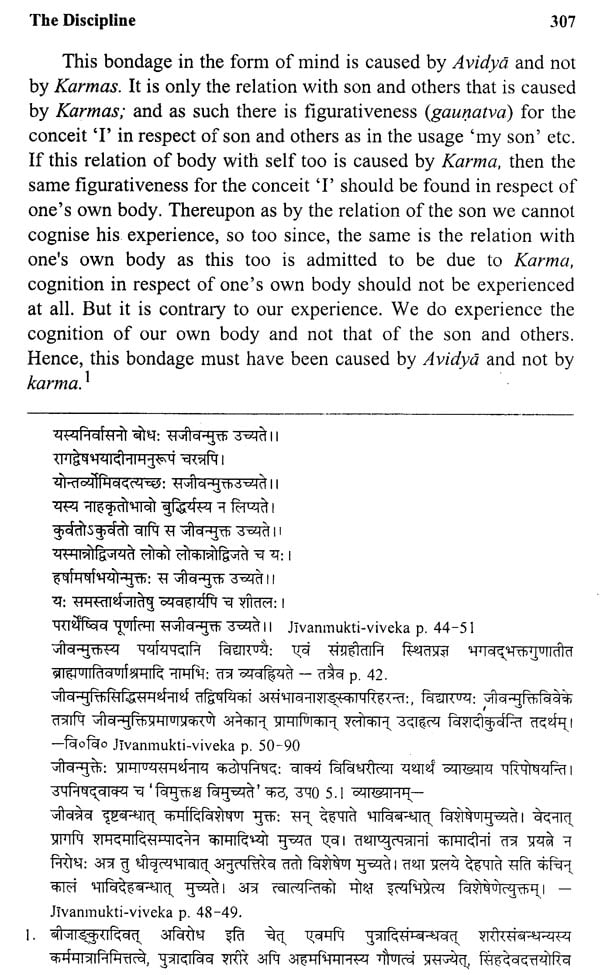 The Advaita Tradition in Indian Philosophy (A Study of Advaita in Buddhism, Vedanta And Kashmir Shaivism)
By Chandradhar Sharma
$37
FREE Delivery
Best Seller Studies in Advaita Vedanta: Towards an Advaita Theory of Consciousness
By Sukharanjan Saha
$30
Out of Stock An Introduction to Advaita Vedanta Philosophy: A Free Rendering into English of 'Laghuvasudevamanana'
By Swami Tejomayananda
$16
Best Seller Advaitic Mysticism of Sankara
By A. Ramamurty
$31
FREE Delivery The Doctrine of Maya in Advaita Vedanta (An Old and Rare Book)
By D.R. Satapathy
$31
FREE Delivery