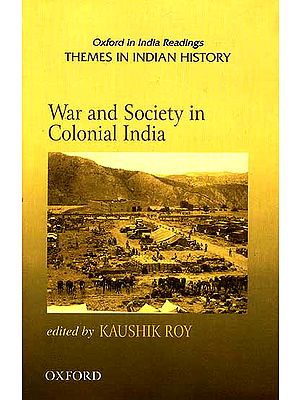 $35.00
Usually ships in 15 days
Notify me when this item is available
Save to Wishlist Send as E-card Share by Email
From the Jacket

The role of armies and warfare in shaping colonialism in South Asia has not received much attention in academic history-writing. The sepoy army constituted the largest government employer for the colonized. Military service under the colonial regime also moulded the structure and ethos of the subject populace. Part of the prestigious themes in Indian History series, this volume analyses the complex dialectics; between warfare, the British-Indian war machine, and colonial society.

The reader considers the social and cultural dimensions of colonialism and also assesses the nature of the colonial state. Spatially and temporally, it covers a wide canvas. The essays are arranged chronologically within broad thematic heads. The first segment deals with coercion, discipline, and dissent in the sepoy armies while reopening the significant debate on whether sepoys were mercenaries or professional army men. The next part discuses the military cultures, symbols, and martial constructs introduced by the British. The concluding section investigates the torturous transition of the colonial army and state from waging limited warfare to large-scale industrial warfare.

This volume will interest scholars, students, and researchers of colonial history, politics, and defence studies, particularly those concerned with the linkages between state, war, and society.

The present volume initially started as a sequel to The British Raj and its Indian Armed Forces: 1857-1939, edited by late Professor Partha Sarathi Gupta and Anirudh Deshpande, and published by Oxford University Press, New Delhi, in 2002. More than five years ago, a small group of researchers decided to bring out a series on the impact of armies and warfare on colonial Indian state and society. P. S. Gupta agreed to provide leadership to this ambitious project. Unfortunately, he passed away before the first volume saw the light of the day.

However, the response it ultimately received from several historians all over the world encouraged us to proceed with the second volume. Some of the contributors to the first volume have also written essays for the second volume; we have also included new essayists since the aim was to cast the net as wide as possible. The editor regrets being unable to include some notable published articles on account of copyright problems. He thanks all the contributors for making this volume possible.

In 2001, as part of the Themes in Indian History series, a volume on Indian military history titled Warfare and Weaponry in South Asia: 1000-1800, edited by Jos J. L. Gommans and Dirk H. A. Kolff was published by Oxford University Press. The present volume centring on the themes of war, state, and colonial society begins with the nineteenth century and carries and story forward to 1945. The principal objective is to analyse the colonial state's armies multidimensionally. The attempt is to integrate traditional military history with broader social and cultural studies. This volume, unlike other volumes in the Themes in Indian History series, has an added advantage-in addition to landmark pieces reprinted; fresh articles provide the reader the latest research on the subject.