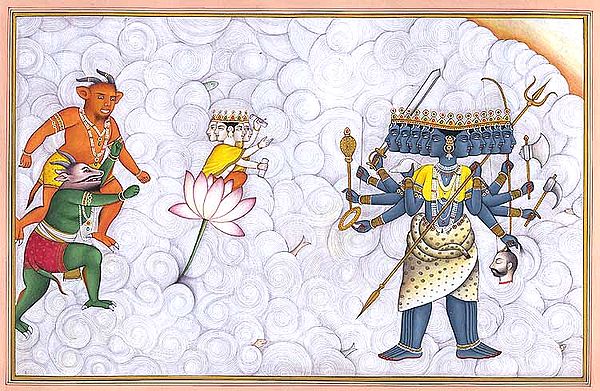 $205.00
Notify me when this item is available
Save to Wishlist Send as E-card Share by Email
I resort to Mahakali
who
holds in her hands sword, discus, mace, arrow,
bow, bludgeon, trident, missile-head and conch,
is three-eyed,
is adorned with ornaments on all her limbs,
was extolled by Brahma in order to destroy
Madhu and Kaitabha
when Vishnu was in (mystic) sleep,
is luminous like a blue jewel,
has ten faces and ten legs.

She is the one whom Brahma of the lotus-seat praised
for the purpose of destroying Madhu and Kaitabha,
She is said to be Vishnu's super-conscient sleep,
She is Mahakali in whom tamas (inertia) predominates.

At the end of a kalpa - a day of Brahma, measuring the duration of the world - when the universe was resolved into primeval waters, Vishnu in mystic slumber was reclining on the thousand-hooded Sesha in the Kshirasagara (ocean of milk). Brahma was seated on the lotus sprouting out of Vishnu's navel. At that time, two demons Madhu and Kaitabha, born out of the earwax of the sleeping Lord, sought to slay Brahma. Perturbed, Brahma prayed to the goddess Mahamaya dwelling as mystic slumber in Vishnu's eyes:

O you who are the soul of everything, how can I extol you?
By you, even he who creates, sustains and devours the world, is put to sleep,
Who is here capable of extolling you?
Let Vishnu the master of the world be quickly awakened from sleep
Let him be aroused in order to slay these two great asuras.

Thus extolled, the goddess drew herself out from Vishnu's eyes, mouth, nostrils, arms, heart and breast and appeared before Brahma in all her splendour as Mahakali.

In the painting we see her dark frame beautifully silhouetted against slate-grey waters, a commanding, majestic presence. The lofty waves of the ocean in the background encompass the divine vision of the artist. Smaller waves surge aloft on all sides. What is of particular notice in this painting is the slight tilting of the lotus due to Brahma's weight. Besides effectively balancing the entire composition, it is an eloquent testimony to the artist's attention to sensitive detail. On the emergence of Devi, Brahma 's hands are stretched in a laudatory gesture and the two faces turned towards her reflect his relief and joy at her appearance. The two demons, Madhu and Kaitabha, on the other hand, seem to have frozen in their tracks on seeing her.

The story, however, does not end here. This myth has another deeper level of meaning, which we must pay attention to if we are to appreciate it fully. The series of events in this myth allegorize a very human situation. The two demons born of the ear-wax of Vishnu may be metaphorically understood as prejudices and biases in the human psyche which arise from the vicious habit of hearing evil as also readily accepting others' opinions. Brahma, the creator of the universe, represents the innate creativity of the mind engendered by this habit of relying on second-hand knowledge. The artist's own contribution to the scene is the emerging rays of light at the right corner of the painting which may be interpreted as rays of hope for human welfare and progress. At such moments the sincere seeker of truth who prays, like Brahma in the myth, to the Divine Mother to remove the veil of ignorance - here compared to the state of sleep - and to awaken the mind's innate capacity to discern truth.

The word Maha (great) is prefixed to the Goddess Kali in order to emphasize her sovereignty over time. The word Kali refers to one who devours time - Kaalam grasyati ya sa kali -i.e., one who transcends its divisions or barriers, signifying thereby that there is no time-limit for her, for she is infinite, without beginning or end. Mahakali's three eyes represent this subjugation of time in its three divisions, trikala, as past, present and future. Here, a point needs to be made. In Indian mythology, time is not conceived eschatologically. It is rather thought of as a cycle perpetually rotating on the axle of infinity. The chakra (wheel) in one of the right hands of the Goddess is the Kalachakra (wheel of time). Not only is she the vanquisher of time, she is also the one who holds all time in her hands. Her omniscience, omnipresence and omnipotence are symbolized by the expanse of ten faces and ten legs, projecting their knowledge and sway in all directions. In each of her ten arms the Goddess bears a weapon. The sage Markandeya gives us the following general explanation for these:

These are not really weapons
rather they represent the great elements which the Supreme bears,
the conch in the hand of the god represents space,
the discus symbolises wind,
the gada (mace) signifies tejas (light),
and the lotus, water.

In this particular context the khadga (sword) in one of the right hands of Mahakali is the viveka-vijnana-mahasina, i.e., 'the wonderful sword of knowledge and discrimination' which destroys ignorance and helps us to discriminate between relative truths and eternal verities. The fact that such discrimination is picturised as a sword also expresses the belief that this understanding severs the shackles of bondage to material things. Hence, the sword is also considered a symbol of renunciation, as is apparent from the following line quoted from the Vishnu dharmottara Purana:

The sword Nandaka represents vairagya with which
The bondage of the world is broken.

The gada (mace) signifies stability. Describing the icons of the deity in the chapter devoted to Pratimalakshana in the Vishnu Dharmottara Purana, Markandeya says:

i.e., the mace in the hand of God subdues all creatures in this maya. In her left hand, hand the Goddess holds a bow, which symbolises the sankalpa (power of desire of the mind, which creates the phenomenal universe. By shooting with the mind as bow the arrows of the five sense-elements, she creates the universe, a projection of the mind through the senses. The shankha (conch) symbolises sound and its carrier space.

In the third hand on her left side, Mahakali does not hold a weapon. She holds a severed human head. If we look carefully at it, what strikes one's attention is the expression of absolute serenity on its face. It personifies the bliss that comes from surrender to the Divine; the fact that the head is severed from the body emphasizes the falling away of all worldly attachments auxiliary to such surrender.

This is the allegorical significance of the story of Mahakali in the light of which we can understand the following invocation to her:

O thou who drove away Madhu and Kaitabha,
O giver of good to Brahma, salutation to thee!
Give the form, give the victory, give the fame,
Kill the enemies.

This painting of Mahakali is a complete picture in itself, signifying artistic beauty. Verily, the artist has been engrossed in meditation while pictorialising the feelings of his heart.

The bright white complexion of Brahma and his yellowish upper garment symbolise the detachment and tranquility of his mind; yet the red lower garment speaks of the intensity of his anger. Both the rear faces of Brahma reflect the feeling of perplexity and fear he is struck with on seeing the demons, Madhu and Kaitabha; yet Brahma's front faces appear to be happy and peaceful on the instant emergence of Devi. The lotus flower has tilted a little with the body weight of Brahma; and with the emergence of Devi, one hand of Brahma stretched in a stance of joyful gratitude indicates his peace of mind.

All the faces of Devi Mahakali are effusing wrath and anger; yet her motherhood and her tender and effulgent limbs bring into the limelight the sacredness of the womanly beauty. There are weapons and missiles galore in the hands of the mother Goddess; yet her breasts are covered with a yellow garment. In fact, her heart is wrathful, but the motherhood in her predominates. The darkish effulgent complexion of her limbs has a tinge of the bluish light of yogic sleep, which speaks of love and affection springing forth from her heart. Goddess Mahakali is looking spellbound at the demons who would now be the first to mount an attack on Brahma. Both the demons with their teeth bared are looking fearful. The red color of the demons symbolises wrath and anger. The lofty waves are surging aloft on all sides. Verily, the artist has very dedicatedly laboured in painting these minute details. The shimmering blue waters are so dexterously matching the blue complexion of Goddess Kali. The painter's brush has worked wonders in producing the subtle effect of light and shade. The rouge of the sky speaks of diversity in unity. The weapons and missiles in the hands of Devi signify the dignity of the realistic painting talent of the artist. The three dimensions (or divisions) of space not only speak so high of the balance maintained in the trisection but also are breathtaking.