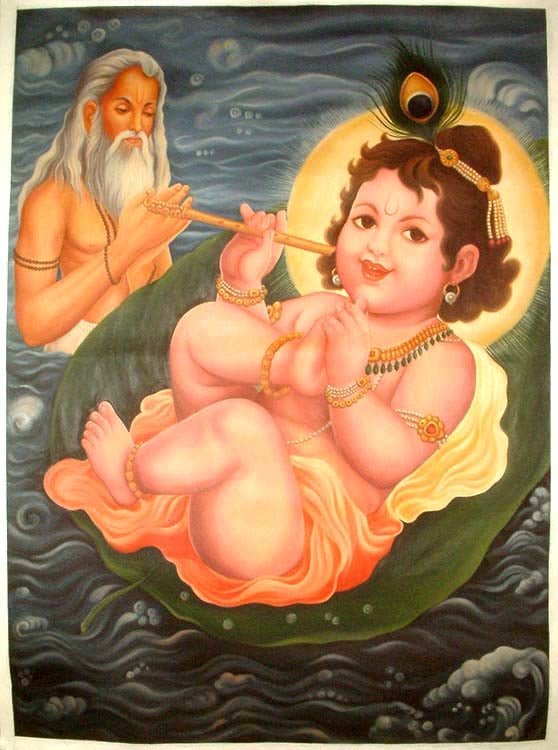 $255
Quantity
Notify me when this item is available
Saint Markandeya, the son of Mrikand Rishi, was once worshipping the Lord. He had no desires of any kind. The fact is that when a person wants the Lord to fulfill some desire, he considers the object of his desire to be more important than the Lord. It is not a sign of respect, that when the Lord appears before a person, the person asks for some toy, instead of asking for the Lord, Himself!

Markandeyaji had no desire whatsoever, but when the Lord Nara-Narayana appeared before him and told him to ask for a boon since He was pleased with Markandeyaji's stuti. Markandeyaji prayed, "Sir, I have obtained your vision, and desire nothing else. However, I want to see what your Maya is. Please grace me with a glimpse of your Maya."

The Lord was quite surprised to hear Markandeyaji's request. However, he said, "All right, you will have a glimpse."

One evening, Markandeyaji sat on the bank of the river Subhadraa, to do the evening Sandhya Vandan worship. It seemed to him that the sea was rising on all sides, coming towards him, flooding everything in its path. The water reached him and swept him away, but he did not die. He saw the whole world submerged in water. Sometimes, some creatures of the sea would swallow him and sometimes some other creatures would swallow him, but they would throw him out again. He wandered thus for several millions of year. Ultimately, he saw a tiny baby sleeping on a cupped leaf of a banyan (peepal) tree.

It is stated by the Lord in the Vedas: "Oh, Human! This village of yours is balanced on the peepal tree and your lifespan is just alike a drop of water on a leaf, which may fall any minute."

When Markandeyaji went close to this baby, he was sucked in with the air, when the baby took a breath. Inside, he saw hundreds of thousand of universes. So mush so, that he even had a glimpse of his own Ashram on the banks of the Subhadra River. He saw himself sitting in meditation. Then he emerged again, when the baby exhaled. When he went to bow down to the baby, he realized that there was no baby, and no other scene. He was back at the same spot, on the same day, at the same time, as when he started his Sandhya Vandan.

Markandeyaji thought, "Oh, what was all that which I saw?" Then he understood that it was the play of Maya, which he had seen. Maya hid the Paramatma, hid the truth, and showed - like a magic show - that, which did not exist. Markandeyaji was wonderstruck. He realized that one can never understand God, but only sing His glories. He thus became engrossed in the prayers and meditation of the Lord again.

Krishna is the most widely worshipped of all the avatars of Vishnu and often the subject of an intensely emotional cult.

The sun-like baby Krishna is lying on a lotus leaf floating on water. Enormous details, mostly imaginative, though as much realistic, tend to depict him as a tender, lovable, most extraordinary child. Curls cup his chubby face - a face that holds the most impish smile, naughty eyes that contain a glint within. The body of baby Krishna is adorned lovingly with jewellery; his hair tied up neatly in a knot tied by a string of beads with a peacock feather tucked in. With one hand occupied with the flute he uses the other to direct his toe to his mouth which parts mischievously. He must have been initially wrapped in a yellow-orange cloth, which he has kicked away.

In the background, towards the left stands an aged, gentle rishi with flowing beard and hair; tulsi beads form his necklace, bracelets and armlets. He stands with folded hands paying salutations to Krishna. He recognizes the divine lord even in his form as baby Krishna. In his expression he has genteel and wisdom that arises out of dedication and devotion to God. He stands against a backdrop of the ocean.