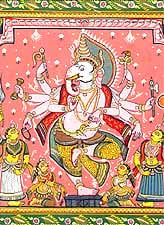 $85.00FREE Delivery
This item can be backordered
Time required to recreate this artwork
6 to 8 weeks
Advance to be paid now
$17.00 (20%)
Balance to be paid once product is ready
$68.00
Notify me when this item is available
Once Ganesha was walking along a forest path. Lost in his reveries and delight at the beautiful day, he forgot to look at the path ahead of him. Turning a corner, he bumped into Brahma, who was on his way to the river. The bump quite knocked out the wind out of Brahma. He glared at Ganesha and said in anger: "Son of Parvati, I. I.... -" But the curse he was about to pronounce upon this impudent youngster with an elephant head died before it was born - for Ganesha, seeing that Brahma was angry, had begun to dance. At first his big belly shook and his feet thudded noisily. The flowering creepers swung away in alarm, and hordes of chattering black-faced monkeys scurried up to the very tops of the trees, their small babies clinging to their underbellies.

But as Ganesha concentrated, his fat body took on an elegance all its own, and his dance was as beautiful as the rhythm of the tides and the music of the stars. Brahma's frown, trying hard to stay on his face, melted away, and he broke into a smile. "Truly you are a son of Shiva, Ganesha," said Brahma. "Like the strokes of a pen that end each verse of a poem, Shiva's dance ends each cycle of creation. But your dance - your dance has in it the laughter of creation itself, the joy of the universe." Finally Ganesha stamped and whittled, did a final whirl, and ended with his feet planted squarely on the ground. He faced Brahma, laughing, and held his right hand, palm facing out, in the gesture of blessing called the abhaya mudra. Brahma bowed down to Ganesha in respect. "You who are young, yet have such exquisite dancing in your soul, I bow to you. I was about to curse for interrupting my thoughts, but now I bless you instead, O Ganesha. You will be known by people as the Master of the Dance.All who perform this art in town and in city, in temple and in court, must first invoke your blessing. May it be so, as long as the earth shall live." In the classical Indian dance style called Bharatanatyam, Ganesha's gesture of blessing, the abhaya mudra, means "be not afraid." Even today, every Bharatanatyam performance begins with a special brief dance that recalls Ganesha's grace and seeks his blessings.