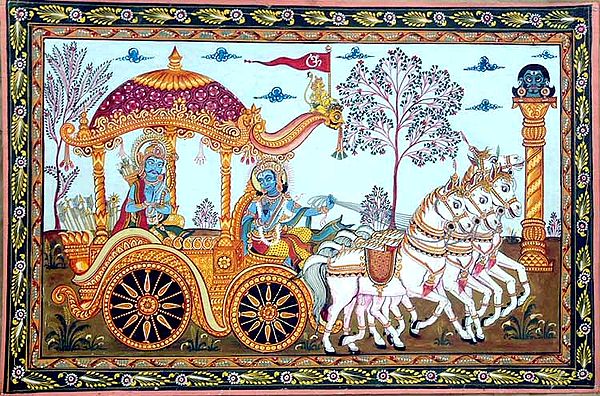 $140
FREE Delivery
This item can be backordered
Time required to recreate this artwork
6 to 8 weeks
Advance to be paid now
$28 (20%)
Balance to be paid once product is ready
$112
Notify me when this item is available
This one scene from the Mahabharata has been immortalized not only because of the creative urge, but for also being a major turning point in the Great Battle.History and legend would have told a different tale if it wasn't for the sermon by Krishna to Arjun, known in popular culture as the Bhagvad Gita.

This colorful rendition with bold lines and soft expressions speaks of the first day of the battle between the Kauravas and Pandavas. Arjun sat silent in his chariot gazing into the distance at the opposing army, at the figures who stood as his enemies- Bhishma, Drona, Kripa,... his cousins. These were people who he loved, who were close to his heart-how could he shed their blood? What would he gain by destroying those he loved and revered? Of what use would be such a victory? Arjun's heart faltered and tears rolled down his cheeks. Suddenly, he threw away his arms and sat down, crying out- "Krishna, I will not fight this war! I cannot bring myself to destroy those whom I love and honor. Let us surrender. Let the Kauravas take everything so that there may be peace and goodwill."

It was a moment of crisis. A great battle was about to commence, and the foremost warrior of the day had suddenly lost courage. It seemed to him so senseless and futile to fight and kill-all for the sake of a patch of land called a kingdom.

Krishna listened to Arjun's words with compassion. He spoke to Arjun of life and death, of this world and the ones that are invisible, of the struggles and conflicts, the sorrows of mankind and the three paths by which men may reach God. The path of duty was one of them and for a Kshatriya, the way to God lay in the path of duty only. It was Arjun's duty to fight for righteousness, whatever the consequences. Arjun must act fearlessly. And when he acted, he must do so without the desire for reward or glory or even success. Right action, said Krishna,was that which was free from all desires.

Last of all Krishna revealed himself to his friend in all his glory. Arjun saw the heavenly vision which was limitless as the universe itself. He sat spellbound. A Strange emotion seized him. Nothing seemed to have changed except in Arjun's heart, for he had seen the light of wisdom. Then, with a new spirit surging through him, he took up his weapons again and went into the battle.