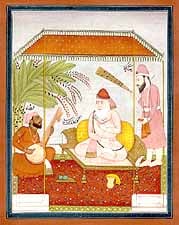 $65
Quantity
Notify me when this item is available
There is much that is familiar in the image: the bearded, sage-like appearance, the loose patchwork Gudri-cloak, the cap on the head, the mala in the hand. Guru Nanak, as conceived in this mode, is instantly recognizable. Entirely predictable also is the presence of Bhai Mardana with his rabab, and bhai Bala, in his mendicant's ochre-robes, waving a morchhal.

Mardana (1459  1634) was the close and lifelong companion of Guru Nanak, who was born in the same village as Guru Nanak, Talwandi, now in Pakistan. He was a Muslim of the low-caste group known as 'dum', whose traditional occupation was that of singing and dancing at festivals and weddings. Mardana was a skilled player of the rabab. Three of his own compositions are included in the Guru Granth sahib, on page 553.

Bala was the jat Hindu companion of Guru Nanak, who accompanied him on many of his journeys, and thought by some to be the author of one of the Janam sakhis (Hagiographic accounts of the life of Guru Nanak). The date mentioned in this particular Janam Sakhi is the one celebrated as Guru Nanak's birthday, in November (Kartik).