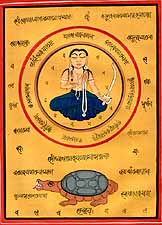 $45
Quantity
Notify me when this item is available

Fair trade
Om ah priyadarshanaye namah is the mantra, which brings accomplishment of desires of love and prosperity. In tantra Kamala, one of the ten Mahavidyas conceived in relation to Vishnu, is the giver of love, prosperity and all worldly accomplishments. She is conceived as lotus-eyed and with complexion as if created from melt gold. A serenity and calm define her demeanour but a resoluteness and determination are nonetheless her attributes. She is the spouse of Vishnu and Kshirasagar (the ocean of milk), is her abode, which she shares with her lord Vishnu. She commands all jewels lying under her into deep waters and the entire beauty, which the lotus symbolises, but to reach her and be blessed with prosperity, love and beauty one has to wade across the tumultuous oceans of austerities, something quite difficult.

Hence, for the accomplishment of minor material objects and for common folk there were conceived in later tantrika innovations several related minor deities, called the upa-yantras, or the subordinate deities. This deity-form obviously relates to accomplishments of the desires of love and prosperity and is a subordinate form of Kamala, the goddess of fortune. Her golden complexion, eyes drawn as if a couple of bows lay inverted one over the other casting the forehead like an eagle on wings, her oceanic deep blue costume rendered in a shape as if the figure is couched on a seat in ocean, the abode of Lord Vishnu, a furious tortoise, which as the vehicle of Vishnu re-iterates his presence, and the circle around symbolising the cosmos emphatically define the deity as Kamala's subordinate. She, with a rosary in hand, is in meditative posture and holds in her other hand a sword, which symbolises her resoluteness. The back of the tortoise formed of six capsules representing the female form is again a tantrika innovation symbolising earth governed by female energy, that is, female energy crowns the cosmos and is the sole instrument of the accomplishment of all worldly desires.