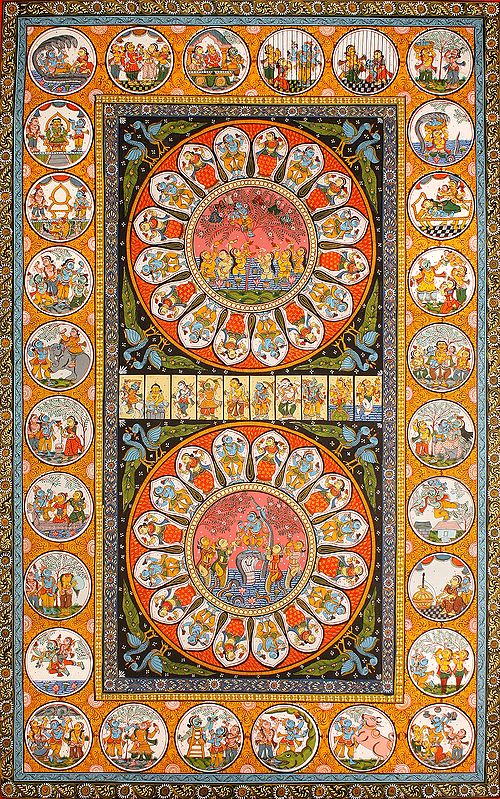 Fair trade
This Pata-chitra, exceptional in its visual effect : a large canvas but with delightfully carved spaces imparting to it multi-perspectives, beautifully conceived and designed, and brilliantly coloured, represents some major episodes from the life of Krishna. The two episodes, one illustrating ‘vastra-harana’ : Krishna stealing Gopis’ apparels, and the other, subduing the venomous serpent Kaliya, in the centres of the two medallions, one reflecting Krishna’s romantic-socio-ethical vision, and the other, his persistent endeavour against evil and all that destroyed environment by poisoning it, index the dimensions around which the artist seems to have woven in his painting most of the events of his life.

A queer blend of verticality with horizontality, one, the inherent character of the canvas, and the other, the way it has been used, the painting has been divided into a rectangular middle consisting of two identical squares, each housing two concentric circles and a dividing band, and the vertically arranged side spaces. The partitioning band has been divided into ten vertical cubes representing Vishnu’s ten incarnations : Dasavatara : Fish, Tortoise, Boar, Narsimha, Vamana, Parasurama, Rama, Balarama, Buddha and Kalki. Typical to Orissa tradition, Lord Krishna, widely venerated as Vishnu’s eighth incarnation, is not included in this Dasavatara panel. Under Oriya Vaishnava cult, Krishna is not considered as Vishnu’s incarnation but as Himself Jagannatha, the Supreme, and all Vaishnava incarnations, to be Krishna’s incarnations.

The inner circle, towards the bottom, represents Krishna dancing over the hoods of the serpent Kaliya, its wives entreating Krishna for forgiving their husband, and that on the upper side, stealing apparels of Gopis bathing nude in the village pond, not permissible in social life, all praying Krishna to return them their clothes for without them they could not come out of water. Both outer circles, each consisting of fourteen oval windows, represent Rasa – the cosmic dance of Krishna. He is said to have multiplied his form as many times as were the Gopis to dance with each of them, independent and conjoint, eternally and overwhelming the entire space. Gopis, the separated selves, and Krishna, the Supreme Self, the rasa symbolises that the Supreme is always with one but one has to feel that presence.

The first medallion on the right in the top row represents Lord Vishnu reclining on the coils of great serpent Shesha; the second, Kansa’s sister Devaki wedding Vasudeva; the third, hearing the oracle Kansa inclines to kill Devaki; in the fourth, Devaki and Vasudeva in the prison of Mathura; in the fifth, Kansa killing Devaki’s first born; and the sixth, birth of Krishna, and Lord Vishnu appearing in the vision of Devaki and Vasudeva. The four of the medallions from top to bottom on the left represent four episodes relating to Krishna’s transfer from the prison to Nanda’s house; the fifth represents Krishna killing the she demon Putana; the sixth, killing one of the many demons that he killed; the seventh, Krishna looking for an opportunity to steal butter; and the last, mother Yashoda punishing Krishna for complaints against him.

The first two medallions from top downwards on the right seem to relate to dethroning Kansa; the third, a lesser known legend of archery competition that Kansa organises for killing Krishna; the fourth, Krishna playing on his flute; the fifth, Krishna and Balarama perhaps with mother Devaki; the sixth, perhaps Vasudeva with Devaki and Rohini, his other wife; the seventh, Balarama riding over the demon Pralambha that he later kills; and eighth, Krishna lifting mount Govardhana. The six medallions in the bottom row from right to left represent Krishna killing the horse demon Kesi; the cart demon Sakata; the python demon Aghasura; stealing butter with his friends’ help from a pot hung from the ceiling; killing bull demon Vatsa; and the sons of Yaksha Kuber, Mani Greeva and Nala Kubar, transformed into two trees, regaining their prior status from trees to Yakshas. 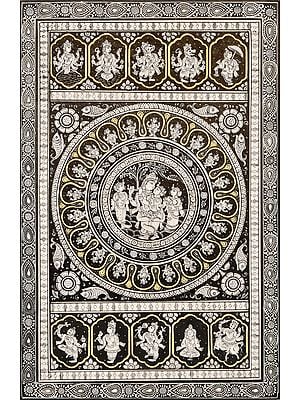 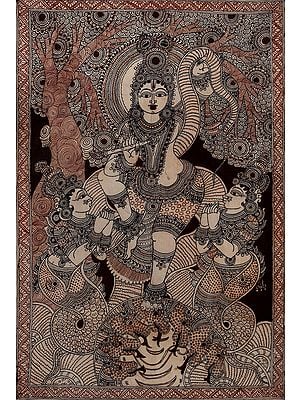 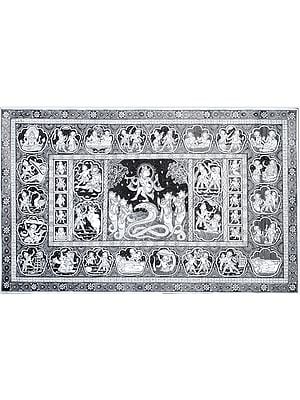 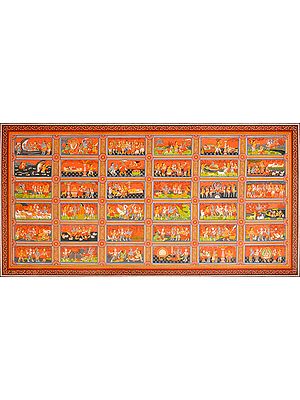 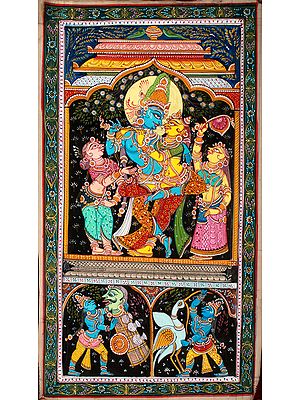 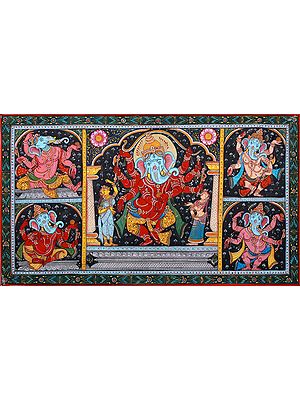 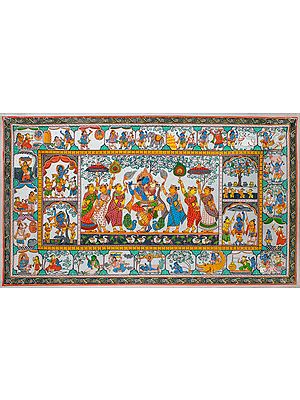 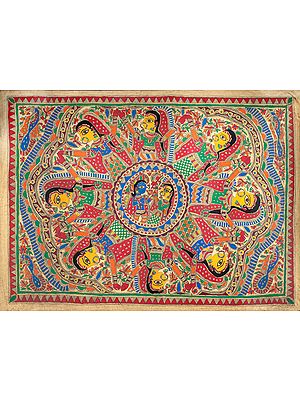 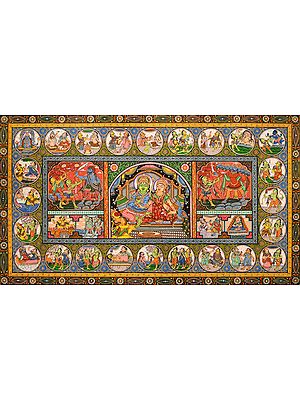 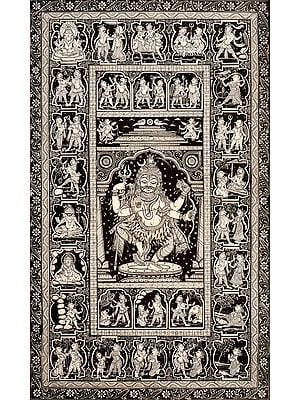 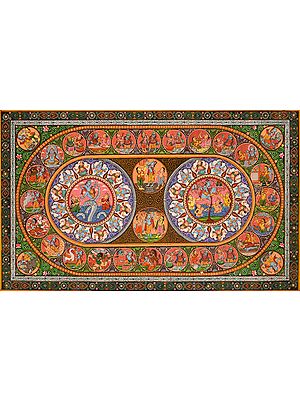 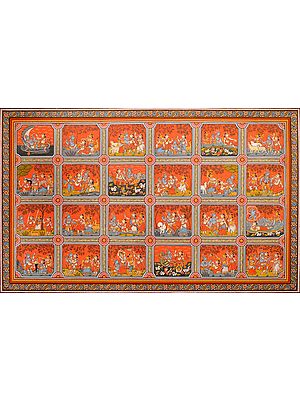 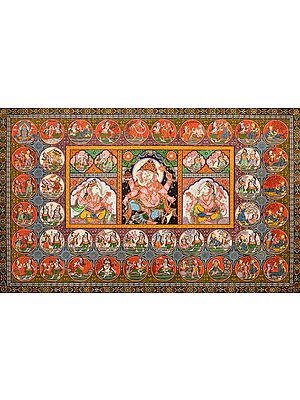 Lord Venkateshvara with Ten Incarnations of Vishnu and Scenes of Shri Krishna Lila
29 inch x 46.5 inch
$495
Out of Stock
Add a review
Have A Question