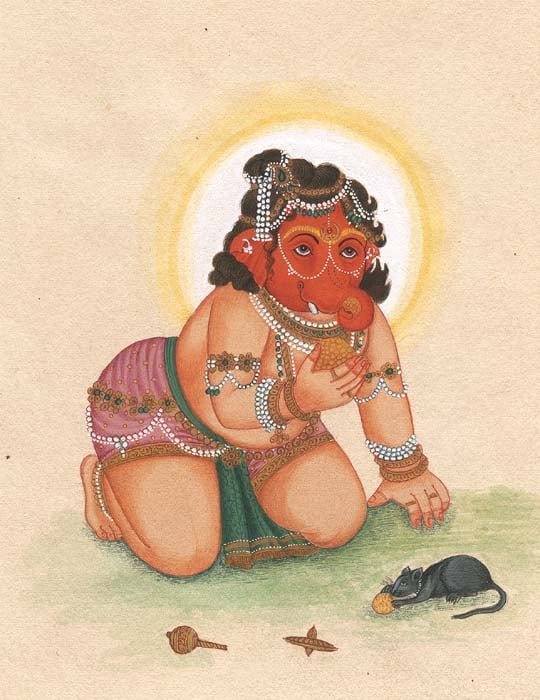 $90
FREE Delivery
This item can be backordered
Time required to recreate this artwork
4 to 6 weeks
Advance to be paid now
$18 (20%)
Balance to be paid once product is ready
$72
Notify me when this item is available
The Ganapatayas, a religious order, regard Ganesha as the supreme being and the embodiment of transcendental reality. They worship Ganesha in different forms.

Ganesha is seen here as a toddler, with rattles strewn around, partaking a modaka. The pose is reminiscent of Bala Gopala. He rests on his knees in a crawling position. A small crown adorns his short curling hair; strings of pearls abundantly decorate his body. Like any normal child, his torso is noticeably longer than the legs. There is a pronounced chubbiness, which naturally elicits an indulgent affection. Ganesha's love for modakas is evident even in his childhood. One is already curved in his trunk as he takes another in his hand. The mouse, his vahana, also nibbles at a small sweet meat.

The artist has paid attention to small details. By shading the outer parts of the torso and limbs in a darker tone, he has imbued volume and hence chubbiness to the child's body. He also paints a solar nimbus to define Ganesha's divine status.