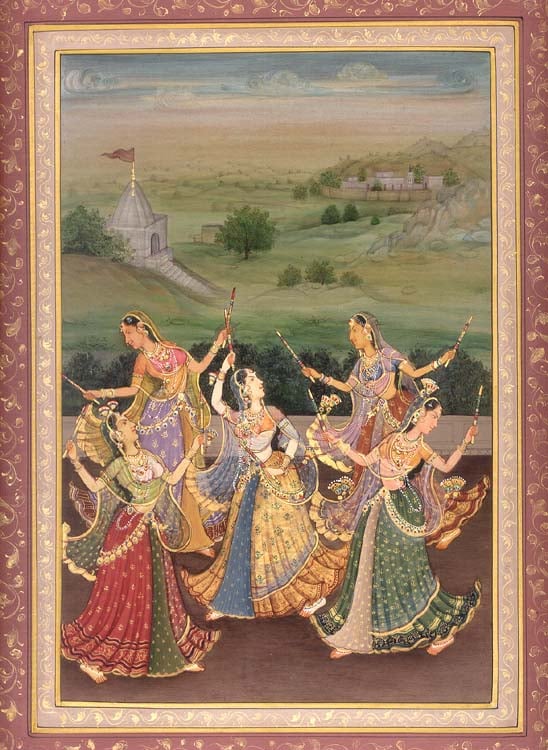 $290
FREE Delivery
This item can be backordered
Time required to recreate this artwork
6 to 8 weeks
Advance to be paid now
$58 (20%)
Balance to be paid once product is ready
$232
Notify me when this item is available
This gorgeous painting, the great work of art rendered in the miniature art style of Medieval India, using the same format, alike delicate colours, fine line work and elegance, represents a groups of five young ladies moving in a rhythmic ring, which is essentially Garba, a kind dance that the people of Gujarat and Western Rajasthan initiated and performed traditionally form propitiating the mother goddess Ambaji. In a subtle departure from the usual Garba form, which required the band of dancing women divide into groups of two each, the dancers here are moving singly around one of them who forms the axis of the ring. The galaxy of five dancers, clad in costume of five different colours, create unique colour effect, the harmonious as well as contrasting, and give to the canvas exceptional brilliance, balance and vividness. The five dancers, adorned in characteristic Gujarati jewelry and ornaments, the long broad frilling girdles, broad necklaces inlaid with large size rubies, emeralds and other jewels, crests like floral pendants suspending with silk cords and long laces of pearls with intercepting coloured gems, are dancing in full ecstasy and absolute devotion.

The Garba, now one of India's most popular and representative dance forms adapted largely to classical parameters, is able to retain its folk character, which gives it its scenic vividness, variety in movement and exceptional sonorous quality produced inherently from the beats of chacharas, the wooden rods. Initially, Garba was a folk dance, which the people of Gujarat and western region of Rajasthan performed as part of the rituals devoted to Ambaji, the Mother Earth. This belt of the subcontinent, comprising of Gujarat and the adjoining part of Rajasthan, had very early tradition of the worship of the Mother Goddess by the name of Ambaji. May be, the region inherited the Mother Goddess cult from the Indus civilisation, which significantly flourished around this belt. Gujarat not only had in Danta taluka of its Banaskantha district one of the Ambaji shakti-peethas, but also had her quarterly fairs and festivals, to take place during the bright half of the months of Bhadra, Ashvina, Kartika and Chaitrya. The Garba was initially associated with the Ambaji festivals, fairs and rituals and was performed on these occasions. It was strictly a dance of maidens, their number varying from four to fifty. They carried in their hand chacharas, the well trimmed colourful wooden rods. While dancing, obviously in a ring, they formed groups of two each and on each move mutually struck their chacharas and thus created their own inherent music to accompany their dance moves. The dancers believed that their dance was the best of the offerings, which they could make to propitiate the Mother Goddess. The Garba is now the dance of the nation performed not only all over in India but also abroad. It has acquired a lot of sophistication and is performed alike by the male and female dancers, the most popular form being a mix of both, one male grouping with one female.

This depiction is obviously based on its initial form. The artist has preferred only lady dancers to perform Garba in his painting. The costume, jewelry and the features of the dancing figures define their Gujarat links, which is the birthplace of the Garba. For emphasising the ritual character of dance, he has painted, though slightly away from the site of the dance, a temple symbolical of the temple of Ambaji. In subsequent tradition, the dance of Garba got associated with Navaratri celebrations as well. But it nonetheless retained its ritual aspect. If the temple belongs to Devi, Garba's ritual thesis remains undisturbed.