Matsya, the Fish Incarnation of Vishnu 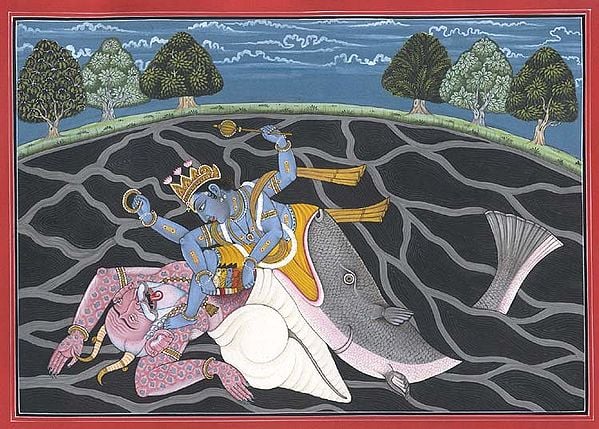 $180.00FREE Delivery
This item can be backordered
Time required to recreate this artwork
10 to 12 weeks
Advance to be paid now
$36.00 (20%)
Balance to be paid once product is ready
$144.00
Notify me when this item is available
The Bhagvata Purana narrates the following tale about Vishnu's Matsya incarnation (avatar):

Long ago, when life first appeared on the earth, a terrible demon named Hayagriva terrorized the earth. He prevented sages from performing their rituals and stole the Holy Vedas, taking refuge in a conch shell in the depths of the ocean. Brahma, the creator of the world approached Vishnu for help and the latter immediately assumed the form of a fish and plunged into the ocean. He killed the demon by ripping open his stomach and retrieved the Vedas. Here the four forms emerging from the demon's stomach represent the four Vedas: Rig, Sam, Atharva, and Yajur.

Matsya (as here), is generally represented as a four-armed figure with the upper torso of a man and the lower of a fish.

The demon's dangling head suggests that he is already in the throes of death. His tongue curls as it hangs out. The ocean which is the scene of battle, fills nearly one-third of the painted space. The background consists of a blue sky with squiggly clouds spread all across it. Three, highly stylized trees are placed symmetrically on both sides, and the edge of the water is marked with tufts of grass.