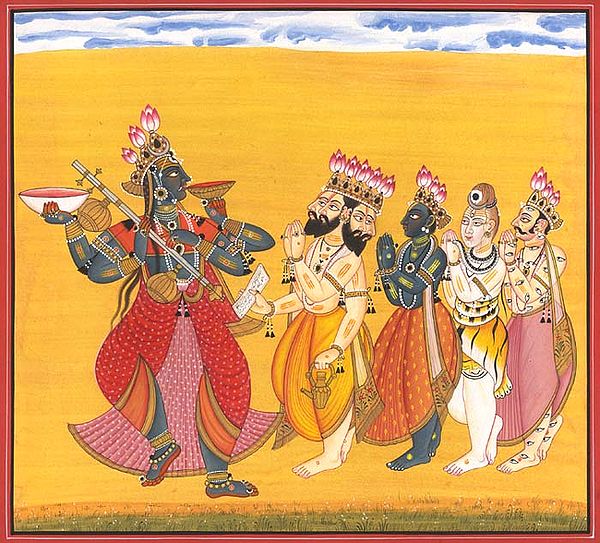 $215.00
This item can be backordered
Time required to recreate this artwork
6 to 8 weeks
Advance to be paid now
$43.00 (20%)
Balance to be paid once product is ready
$172.00
Notify me when this item is available
Save to Wishlist Send as E-card Share by Email
Myths and religious narrative form an important part of Pahari paintings, the charm of which lies in the extraordinary skill and sureness of its execution.

On a turmeric yellow background, the artist extols the place of pride enjoyed by Kali in the Hindu pantheon. Dressed in finery and exquisite jewellery, the four-armed Kali holds the veena, with the rear two hands holding bowls brimming with blood. She stands in a frontal position with her head in profile, facing the gods. She is the most intoxicating personifications of primal energy in the cosmic drama. After having defeated the demons and restoring the powers of the gods, she receives their salutations. The gods, led by Brahma, their objectives gained and their faces radiant with joy, praise the goddess. Brahma, Vishnu, Shiva and Indra, identifiable by their attributes, stand in obeisance. The artist has positioned their limbs in identical manner, lending an element of symmetry. The upper end of the painting has a horizontal strip depicting the sky and a similar one below for the ground.