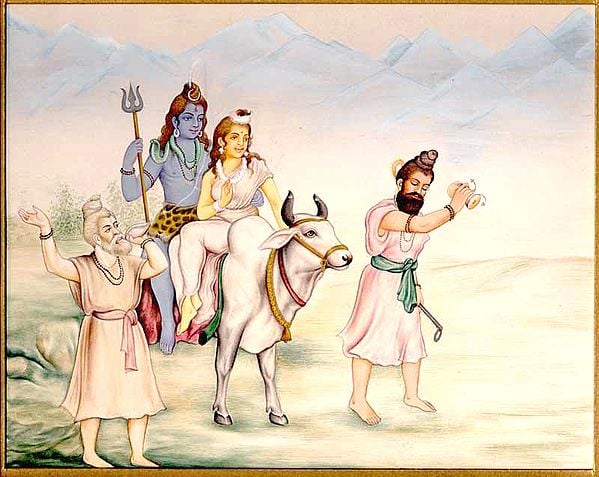 Fair trade
This magnificent painting in light tones of water colors portrays Shiva and Parvati on their Nandi along with two of his devotee ganas, Bhringi and Tumbru. They are on an errand to Mount Kailash. Shiva journeying from and to Kailash is the theme of many of his legends, paintings and folk traditions. Scripturally Mount Kailash is considered Shiva's permanent abode which he is believed to leave, and that too temporarily, only when called by his devotees for redeeming them from their miseries or the earth from wrongs. This form of Shiva is usually known as Vrashbharudha Shiva or as Uma-Maheshwar. This iconography of Shiva does not have Ganesha and Kartikeya.

Nandi who represents by its white, purity , justice and eternal joy is, more than a vehicle, Lord Shiva's constant companion on all his errands. The companionship of Shiva and Nandi is the earliest known phenomenon in Hindu pantheon. Of all Aryan, or Brahmanical deities, Shiva alone is known to have an origin receding back to Indus days. In excavations of Indus sites it is Shiva alone whose images in Mahayogi and Pashupati, or the herds keeper form have so far made their appearance. Another significant image is that of the ox, widely known as Indus bull. Obviously the dairy based Indus culture worshipped as its principal deity a Shiva type god, the keeper of herds, and the one who used a bull as his vehicle. Later Nandi itself acquired the status of an independent deity and there are in the country several temples devoted independently to him. In all cases a Nandi image installed outside the gate of the garbhagraha or the sanctum facing Shiva is an essential feature of a Shiva temple.

Shiva with all his traditional attributes is in his absolute deity form. He holds in one of his hands his usual trident. From his hair bursts the river Ganges and a crescent moon adorns it. He is clad in deerskin and has around his neck a snake. His conch is carried by Bhringi and the damaru by Tumbru, which completes the list of his attributes. Parvati, the daughter of Mount Himalaya, has on her person garlands of white flowers, exactly in tune with the Himalayan landscape. Sharp features, great emotionality , highly expressive eyes and fine proportions define the figures of Shiva, Parvati, Bhringi and Tumbru and that of Nandi. The snowy effect of the landscape is simply unique and soothes the eyes.