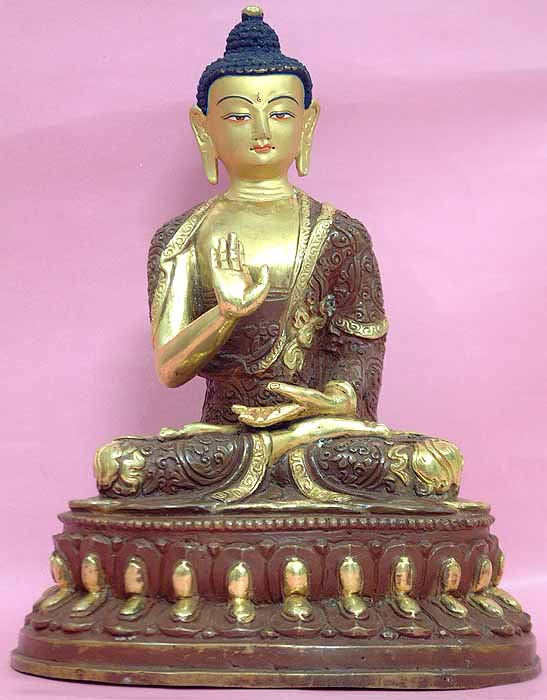 The Boon of Fearlessness (Buddha in the Abhaya Mudra)

$176.25  $235   (25% off)
Quantity
Notify me when this item is available
Buddha's upraised right hand is turned outwards at the level of his heart, his fingers pointing skyward. This gesture is known as the abhaya mudra. Abhaya in Sanskrit means fearlessness. Thus this mudra symbolizes protection, peace, and the dispelling of fear.

This mudra, which initially appears to be a natural gesture, was probably used from prehistoric times as a sign of good intentions - the hand raised and unarmed proposes friendship, or at least peace; since antiquity, it was also a gesture asserting power, as with the magna manus of the Roman Emperors who legislated and gave peace at the same time. Buddhist tradition has an interesting legend behind this mudra:

Devadatta, a cousin of the Buddha, through jealousy caused a schism to be caused among the disciples of Buddha. As Devadatta's pride increased, he attempted to murder the Buddha. One of his schemes involved loosing a rampaging elephant into the Buddha's path. But as the elephant approached him, Buddha displayed the Abhaya mudra, which immediately calmed the animal. Accordingly, it indicates not only the appeasement of the senses, but also the absence of fear. 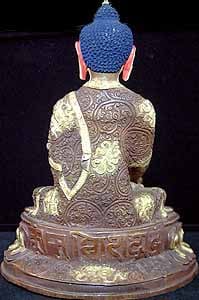 On the reverse side, below Shakyamuni's seat is carved Tibet's most holy mantra, namely Om Mani Padme Hum. This can be seen in the accompanying image. 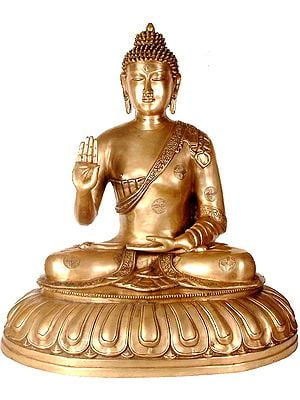 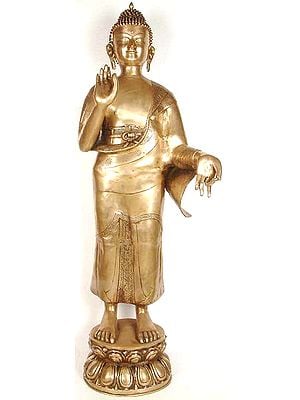