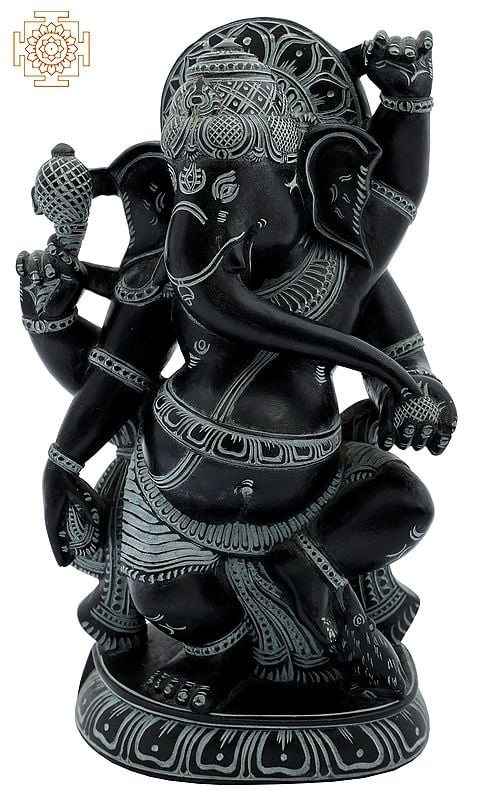 Ganesha is one who is deemed to help manifest limitless triumphs and progress to his devotees. He is usually depicted in a seated or standing position, but in this statue, he can be seen dancing, symbolizing his exuberant side. The anecdote says that Shiva’s unawareness about the identity of Ganesha made the usually well-disposed Shiva bring wrath upon himself that resulted in severing Ganesha’s head with his Trishul. Upon realizing, Shiva decided to bring the quietus Ganesha back to life with the head of the creature his Shiva-dutas’ first lay eyes on, which happened to be an elephant. Ganesha, son of Shiva and Parvati, is since is worshipped as the "Lord of the Gaṇas".

In this stone statue from South India, attention to detail is explicit, indicating various aspects and teachings of Ganesha. Two of Ganesha’s arms here accentuate the “S” shape of his enthusiastically swaying body: his upper-left arm elongates out from his shoulder as the hand points to his Mukut, reverberating his grace and balance; while his lower-right arm traverses our eyes down to mother earth, indicating Ganesha’s free-flowing energy. His long trunk indicates strength and adaptability, his big round belly symbolizes digesting the good and bad in life peacefully, while the mouse is a representative of all-pervasiveness. This simple yet exquisite dancing Ganesha idol falls easy on the eyes and reminds us that life is about living in the moment and savoring the little things in life.