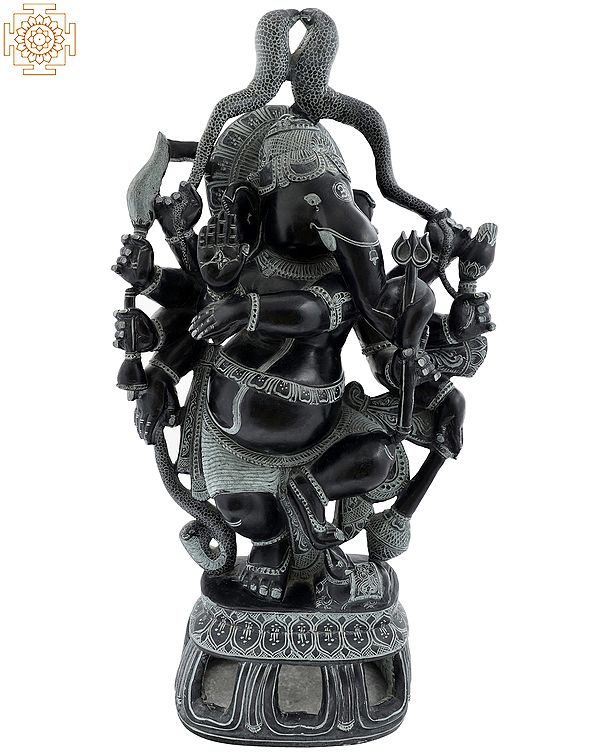 Lord Ganesha is a prominent deity of the Hindu Pantheon. His name derives from two Sanskrit words: ‘Gana’ meaning 'the living beings', and ‘isha’ meaning 'the lord or the master'. The term ‘gana’ is sometimes also taken to mean the semi-divine beings who walk in the retinue of their father, the ascetic god Shiva. Ganesha is the lord of prosperity, success, and an abolisher of obstacles. Goddess Parvati is his mother. As a result of the boon received from Shiva, his omnipotent father, he is invoked at the beginning of auspicious ceremonies, before the other deities. He is the God of Beginnings. He is worshipped in India as well as in numerous countries that still have people with roots in the subcontinent.

This exquisite sculpture of Ganesha, depicts him, with a human body and an elephant’s head. He is in a dancing posture, known as the Nritya Ganapati in this form. He is balancing on one leg while the other is raised. The raised leg bends slightly at the knee, completing the posture. His ride, the mouse, sits content at his feet. Ganesha here has ten hands. The first two hands are holding two snakes each, raised high above his head. The other six hands hold, a dagger, a bell, a lotus, a trident, a mace, and another snake. His two anterior hands are held right in front of his chest; the right in the Abhaya mudra, and the left in Gaja Hasta mudra. This gorgeous dancing statue is carved out of the black stone of Mahabalipuram. The main statue rests on a beautifully designed pedestal. Ganesha is the god of intellect, art, and music. Different dancing postures of Lord Ganesha depict his different frames of mind. His presence is considered extremely auspicious. You will find a Ganesha statue in almost every Hindu household. It is supposed to protect people from losing their path in life. His dancing pose is a symbol that obstacles could be overcome, and success in life attained, through direct worldly action.