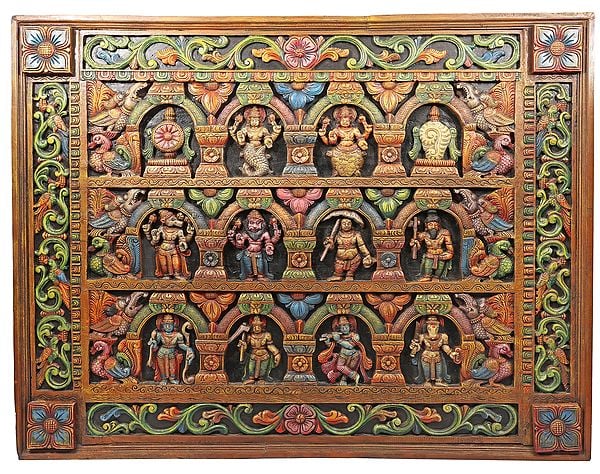 Over the course of our itihasa as a collective microcosm, the importance of the dashavatara cannot be overemphasised. The word ‘dashavatara’ is a portmanteau of the Sanskrt words ‘dasha’, which means ten, and ‘avatara’, which means incarnation. Every time a wave of adharma swept over us, Lord Vishnu made an appearance amongst us in mortal form - man, beast, a composite of man and beast - in order to ensure that dharma prevails over adharma. The panel that you see on this page contains all the dashavatara figurines and, as such, would be an auspicious addition to the home of any devotee.

The panel is carved from wood and subdivided into three horizontal panels of equal width. The uppermost panel features two of the dashavataras - Lord Matsya and Lord Koorma - while the remaining panels feature Lord Hayagreeva, Lord Narasimha, Lord Vamana, Lord Parashurama (central panel so far), Lord Rama, Lord Kalkee, Lord Krishna, and Lord Varaha (the lowermost panel). The spaces in the uppermost panel where there is no avatara are occupied with the chakra (disc) and the shankha (conch), respectively.

The figurines are distinguished by miniscule temple-pillar structures. Mythical birds of vibrant plumage flank each of the panels. Emerald-coloured vines along all four edges of the panel, with more vibrantly plumaged creatures nestling in them. Such a work of art is sure to infuse your space with colour and, of course, an aura of sacredness.