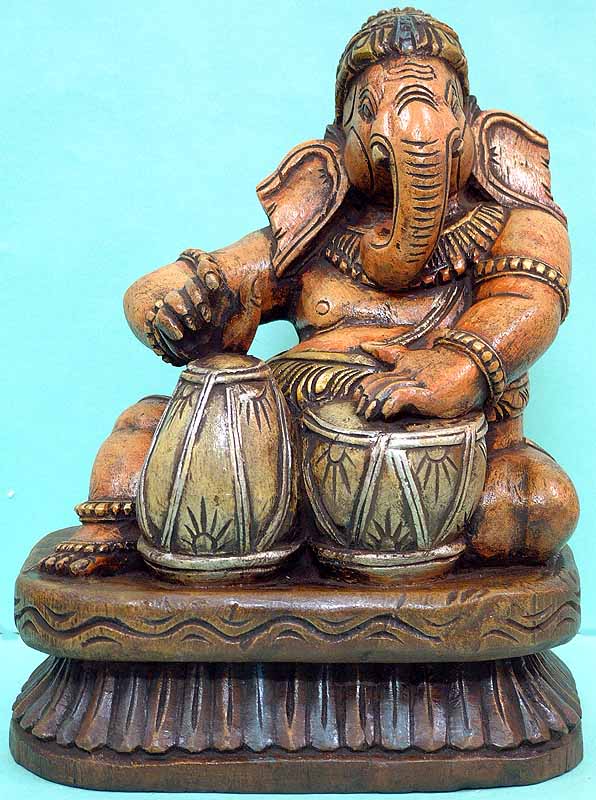 $215
Quantity
Notify me when this item is available
This excellent wooden statue of Lord Ganesha, obviously a member of the orchestra, is the master-drummer and the leader of the group. He is playing on a pair of drums, one male and the other female, India's most traditional drum-form, one roaring like clouds travelling horizontally from one end to the other and the other shaping the sound into various notes rising to zenithal heights. Amidst a large number of Hindu gods and goddesses Indian tradition vests with only four gods, namely, Shiva, Vishnu, Ganesha and Kali, the capacity to dance and drum, or play on other musical instruments. Shiva danced and played on his 'damaru', but only for destruction and dissolution. Vishnu as Vamana danced for eliminating evil and as Krishna for subduing Kaliya. He played on his flute for infatuating 'gopis' and, of course, the entire cosmos along them, for their participation in his great cosmic act using thus the 'ephemeral' for the transcendental. Kali danced on corpses to destroy and for producing awe and horror.

This lively statue of the delightful Lord, carved out of a piece of fine tempered wood, represents him as the leading figure of the group of musician Ganeshas. The artist seems to have minutely studied a drummer's anatomy and translated the same into this excellent form of Ganesha. Like a well accomplished drummer Ganesha is seated holding the female drum within his inward tilted left leg and the taller one held inside the fold of the right one stretching outwardly. His pot-belly, almost penetrating in between the recesses of the two instruments, provides to them gentle but solid support. His entire figure is inclined to left, a reflection of inward energy coiling leftward for its better concentration on the female drum which needs incessant, more forceful, strenuous and louder beats. Deeper wrinkles on forehead, swelled trunk, eyes buried in their sockets and wings-like flanking ears define the ecstasy and strain which the delightful Lord is undergoing in the exercise. 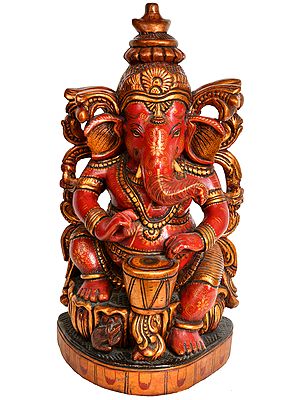