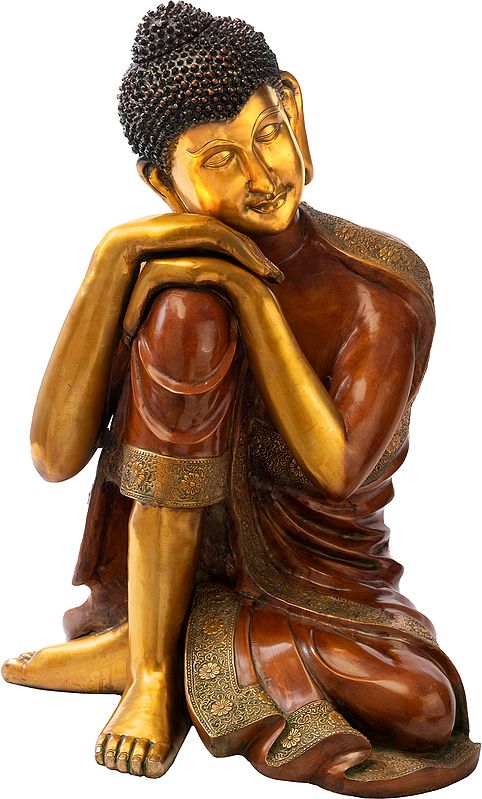 FREE Delivery
$2750
We all know the Buddha as the Enlightened Shakyamuni, seated in the perfect padmasana. Upon hearing His name, an image of His gracious form steeped in meditation or involved in vitarka or even cradling the characteristic alms-bowl. He is the ascetic supreme, and such an image befits Him. However, there is more to the Buddha than asceticism and enlightenment. Before those came years of introspection and intense reflection. It is one such episode - nay, a moment - that has been captured in this sculpture of the Buddha. An unusual portrayal of the Shakyamuni prior to His Enlightenment. He is seated with His legs folded, a knee raised to support His heaving head, which He cushions with His soft, gracious hands as He begins to lose Himself on an inward voyage.

Note how lifelike is the stance of the figure in the composition. This is despite the stillness - from the angle of the neck and the shoulders, to the superbly carved folds of His robe gathered about Him. Even though it is an unconventional visualisation, His personality is replete. Lengthened lobes, which are verily the sign of wisdom in this part of the world; a brow as thick and graceful as the outstretched wings of the albatross; and delicately sculpted fingers and toes, which are best zoomed in on. His composure, as especially conveyed by the mouth, is restful like a true yogi's. His eyes are half-shut, hair gathered in coils and piled atop His shapely head. Should you deide to seat this form of the Buddha somewhere in your interiors, it would fill the surroundings with an aura of divine calm and stability.