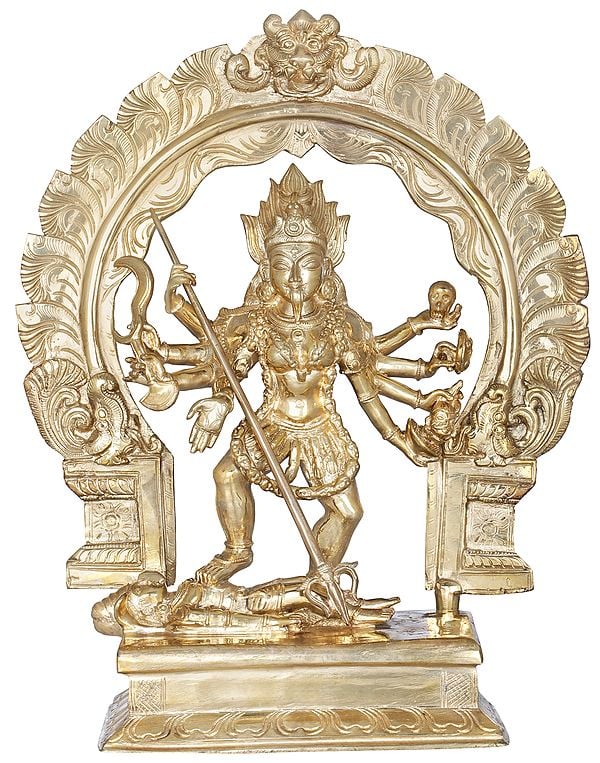 $1095.00
FREE Delivery
(Rated 5.0)
A bronze murti with distinct gold overtones captures the amalgam of the Hindu Devi. The iconography is a blend of Devi Kali, Devi Durga, and Devi Mahishasuramardini. The Devi Kali is predominant. Flaming fire for a halo, that garland of the severed heads of adharmees, and a bloodthirsty tongue emerging from a beauteous mouth. The unmistakable figure of Her husband, Lord Shiva, lying at Her feet as He looks up to Her. Devi Kali is a wrathful deity: the very image of Her is enough to send a chill down the spine of the remorseless adharmee.

The trishoola (trident) in one of Her hands is atypical of Durgaroopa Devi Mahishasuramardini. She is an ashtabhujadhari Devi, one who is possessed of (‘dhari’) eight (‘ashta’) arms (‘bhuja’). In each of those hands is a weapon that the devaloka bestowed upon Durga whilst birthing Her or the flesh and bones of adharmees vanquished in the hands of Kali. Despite the ferocity of form and the minimal shringar to indicate Her status as devi, there is an unearthly beauty about Her.

As is characteristic of Indian bronzes, the murti is housed within a statement-making aureole. The same is composed of concentric circles, each engraved and sculpted with gracious wave- and fire-like curves. The signature Kirtimukham at the zenith of the composition betrays the traditional Southern roots of the workmanship.