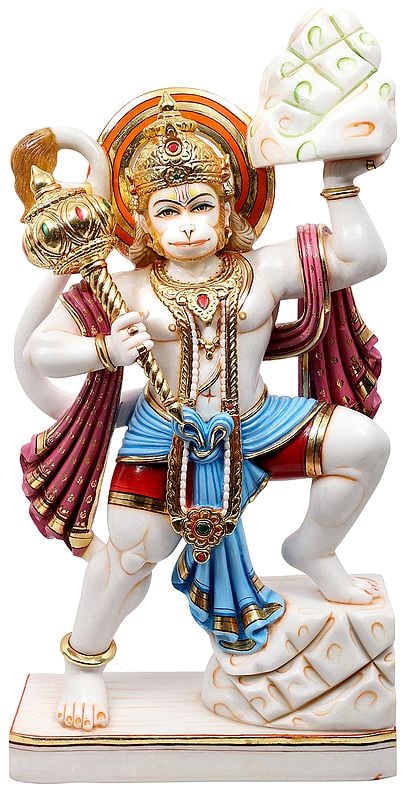 Lord Hanuman is known for his perseverance, strength and true devotion to Lord Rama. Worshipping Hanuman is a way of being remembered for selfless devotion to God and for complete surrender of ego. When Lakshman was wounded by Meghnath, Ravana’s eldest son, it was Lord Hanuman who went alone to Mount Sumeru, situated in Mount Dronagiri Himalayan range to fetch the medicinal sanjeevani, a magical herb that can cure nervous system disorders. This white marble sculpture is an accurate depiction of the same, where Lord Hanuman is carrying the entire mountain that retrieves sanjeevani herb in his left hand, while the right one holds his iconic weapon, mace (gada), all decorated in gold and embellished with red and green stones.

You may zoom in to the picture and appreciate the facial carvings and naturalistic features of the deity, shown with delicate eyes and a heart warming smile. The formation and stance of Lord Hanuman reflects his innate strength and power along with that gentle nature of selflessness. He has his left leg supported on a rock and right is stretched on the pedestal maintaining the body posture. Embellished in luxurious gold jewels of multiple sized necklaces studded in red and green stones respectively and a royal crown that glorifies his head forming an orange and gold aureole behind.

Hanuman is garbed here in a short red dhoti and a blue silken kamarband that partially overlaps it, along with a mauve stole decorated with gold zari motifs as a sign of his royalness. This entire stone sculpture is shaped with a single piece of white marble by expert artisans, whose laborious time is successfully executed in this Hanuman sculptural art. Lord’s tail goes up from behind, slightly visible from behind the gada.