Lord Mahamrityunjaya, The Infallible One 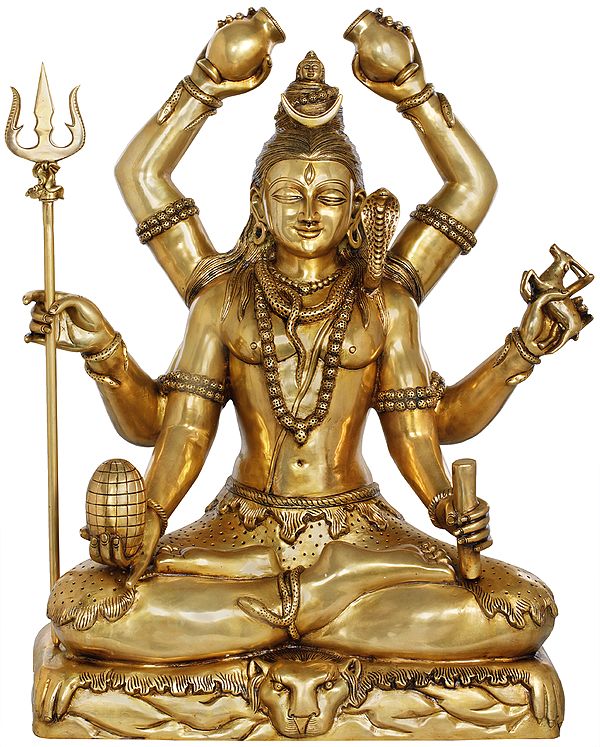 $2295.00
The Mahamrityunjaya-roopa of Lord Shiva is the culmination of His yogic prowess. The name in Sanskrit translates to ‘the great (maha) conqueror over (jaya) death (mrityu)’. Indeed, He is more powerful than abhinivesha, the most difficult of the panchakleshas (five afflictions) that set back yoga. Abhinivesha translates to a fear of death and the consistent self-pursuit of life that defines all forms of life, from the most rudimentary microorganism to the finest intellect.

The Lord Mahamrityunjaya mantra is to be found in the oldest of the Vedas, the Rigveda. It espouses in full the glory of the Lord, also known as Lord Trayambaka. He is the three- (tri) eyed (ambaka) one, the third having spouted from the deepest realms of contemplation (samadhi). His legs are gathered in the poorna-padmasana, the perfection of which is indicative of siddhi (accomplishment) in every other asana known to man. Siddhi in this asana paves the way for the stages of pranayama-dharana-dhyana-samadhi. The murti you see on this page is the very image of the highest form of samadhi (contemplation).

The shashtabhujadhari (six-armed) Deva bears in His posteriormost arms a pair of amrtakalasha (pots of nectar). These He holds over His finely sculpted jataein (dreadlocks). From the trishool and the tigerskin loincloth and asana (mat), to the snakes wound around His neck and ankles, Lord Mahamrityunjaya bears all the hallmarks of the primal Shiva iconography.