Namaskaram Hanuman, His Tail Swishing In A Circle Behind His Head 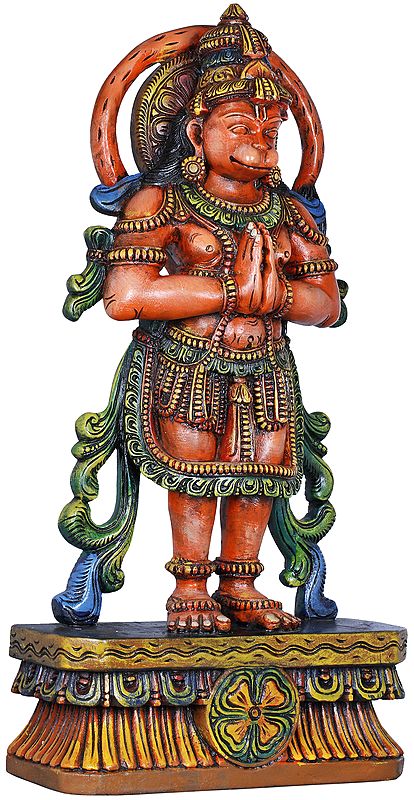 $795.00
South Indian temple precincts have an aura of their own. It comes from the characteristic high ceilings and the pastel-coloured sculptures on the walls. Indeed, these ancient temples were not merely about the icons contained therein; their divinity lay in the devotional expression that found its way onto walls and spires and everything that surrounded the same. The work you see on this page is one such wooden sculpture, the likes of which have graced temple structures of yore.

It is a standing figure of Lord Hanuman, His palms joined together in namaskaram. He stands on a richly engraved green and yellow pedestal. The complexion of His body is a bright, rugged tan. It befits the yogic musculature of His form, as revealed rather than concealed by the ornamental loincloth that reaches mid-thigh. A number of blue and green sashes descend laterally from His tall, erect form. Kusuma-kundalas and a multi-tiered crown completes the Lord’s shringar. Note how the face has been done with a rudimentary attention to detail, given that it is not an icon but a temple sculpture.

The most unique aspect of this composition is His tail. He is swishing it behind His back, high above His head, forming an aureole-like curve around His haloed head. 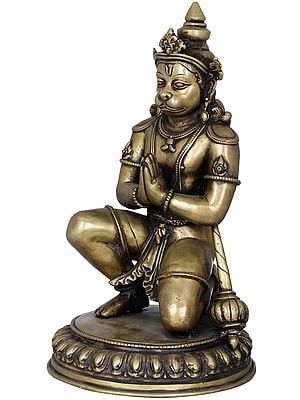