A Thangka is a painted or embroidered banner which was hung in a monastery or a family altar and carried by lamas in ceremonial processions. In Tibetan the word 'than' means flat and the suffix 'ka' stands for painting. The Thangka is thus a kind of painting done on flat surface but which can be rolled up when not required for display. The most common shape of a Thangka is the upright rectangular form. One does also find horizontal oblong banners influenced probably by the format of Chinese horizontal hand scrolls. 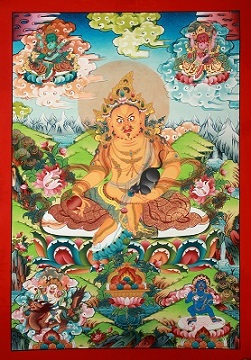 Thangkas are painted on cotton canvas with water soluble pigments, both mineral and organic, tempered with a herb and glue solution. The entire process demands great mastery over the drawing and perfect understanding of iconometric principles.

The execution of a Thangka painting can be divided into six steps:

Preparation of the painting surface

Tibetan painters pay great importance to the preparation of the painting surface since Thangka paintings are to be rolled up for storage and then unrolled for display. Any sort of defect due to neglect may cause cracks or make the paint peel off. A piece of cotton cloth of slightly open weave is stitched on to a narrow wooden frame along all its four sides. 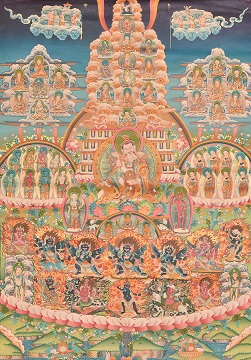 This lightly framed cotton is then tightly stretched over a larger wooden frame or stretcher with a stout thread by a system of crisscross lacing. After setting up the cloth in the frame it is treated from both the front and back with a thin layer of gesso, which is made up of glue and zinc oxide. The canvas is then burnished on both sides with a stone or conch shell to produce a smooth and lustrous surface.

Before sketching different parts of the composition, eight major lines of orientation are drawn. These include a central perpendicular, two diagonals, a horizontal and four outer borders. Now with charcoal or graphite the rough drawing of the deity in full accordance with the canonical proportions is delineated. 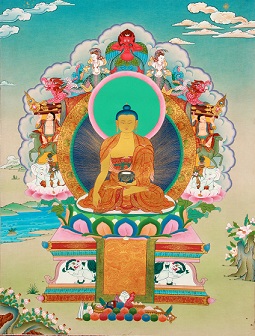 Within a given composition, the center stage is invariably occupied by the principal personage, while all acolytes and attendants are greatly reduced in size to further emphasize the majesty and enormity of the central figure.

Color is more than a visual proposition in Sacred Buddhist Painting. The five basic colors white, yellow, red, black and green have different symbolic meanings. Black symbolizes killing and anger, white denotes rest and repose, yellow stands for restraint and nourishment, red is indicative of subjugation while green is the known hue of exorcising practices. The palette of the Thangka painters has been classified into 'seven father colors' and one 'mother color'. The seven father colors are: deep blue, green, vermilion, minimum orange, maroon, yellow and indigo. The mother color is white which interacts perfectly with all these hues. The lighter shades resulting from the mixture of 'father' and 'mother' were referred to as their sons. 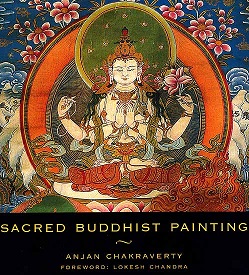 Written evidence from the eighteenth century identifies fourteen such 'sons'. For any large project, the master painter first visualizes the final color scheme and indicates them on the sketch with an abbreviated notation system. While applying the colors the painter proceeds from the distant parts to those parts stationed near him.

After laying the initial coats of flat color the painter proceeds to apply thin coats of dyes diluted in water. Shading in Tibetan Thangkas is always done to add effects of volume and dimension to the form be it a human figure, an anthropomorphic image of some deity or clouds, water, flames, rocks, flowers, curtains, seats, etc. 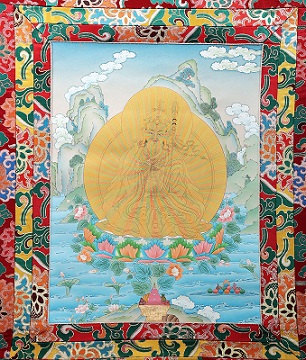 Rainbow Padmasambhava: A Source of Strength and Inspiration for Devotees

Cast shadows and highlights are unknown aspects of the pictorial imagery of the Thangka. Very often the empty green field of the foreground is shown fading gradually into the horizon and such effects are obtained with 'wet shading', a technique of gradual blending of two adjoining areas of wet paint.

In an essentially linear pictorial expression like the Thangka, the art of outlining plays a significant role. To set off objects from the background or to demarcate subdivisions of a certain form, or to emphasize a swirling mass of flames, painters select the indigo and lac dyes for perfect results. 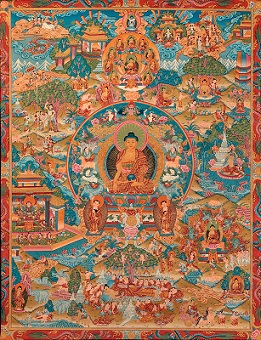 At this final stage the facial features are finished and the eyes of the deities are painted. For this 'eye opening' an elaborate consecration ritual on an auspicious full moon day is fixed and only after the vivification ritual does the painter complete the eyes in swift sure strokes. The whites of the eyes are softened with orange and red at the corner ends, eyelid edges are darkened and then the iris is added according to the required stance of the deity. The two most commonly fashioned varieties of eyes are 'bow eyes' and grain eyes' besides a few fearsome looking ones for the wrathful deities. In order to turn the areas of gold shiny they are burnished gently with an onyx tipped tool after placing a wooden support against the back of the deities. 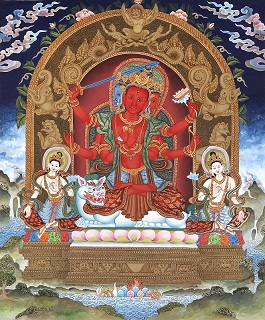 Next, the cord fastenings are cut with a knife and the painting is removed from the stretcher. The Thangka is then mounted with Chinese silks. Often the Thangka is provided with a cover of gossamer silk. When the Thangka hangs on an altar the cover is gathered up to the top and acts as a curtain. Two narrow sticks are attached to the top and the bottom so that the Thangka can be easily rolled up for storage or for a journey.

Most Tibetan artists do not sign their works. Every act of creation is considered to be divine with the artist simply serving as a mortal instrument, and so his own identity is inconsequential. Also, attaching one's name to a work is considered an egotistical act, and it is the duty of the artist, like all pious Buddhists, to destroy the ego. 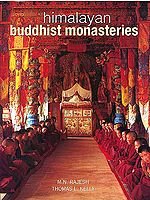 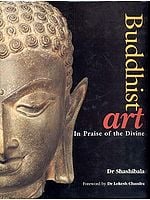 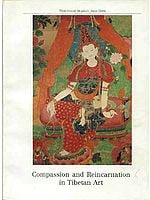 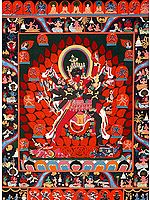 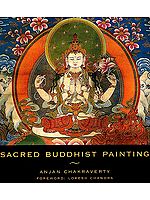 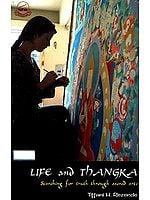 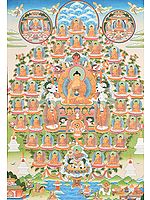 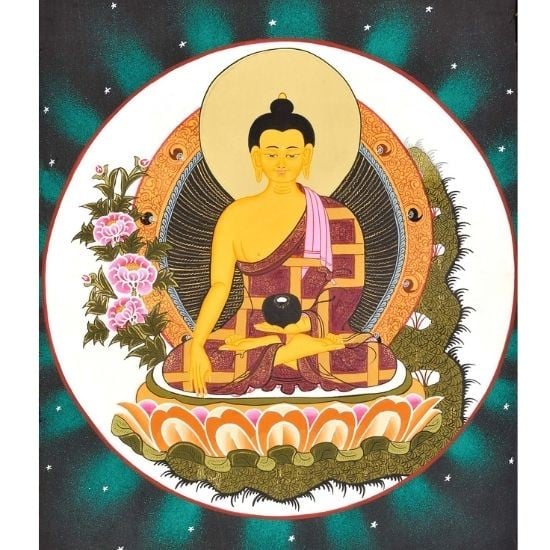 The Life of Buddha and the Art of Narration in Buddhist Thangka Paintings
"In its characteristic unique way, Buddhist thought divides the eventful life of its founder into twelve glorious "events." These defining incidents of his life are given visual form in densely packed sequences narrated in a special genre of paintings... These artworks not only delineate Buddha\'s gradual progress towards spiritual enlightenment, but also present a visual depiction of a vast number of abstract philosophical notions underlying esoteric Buddhism..." 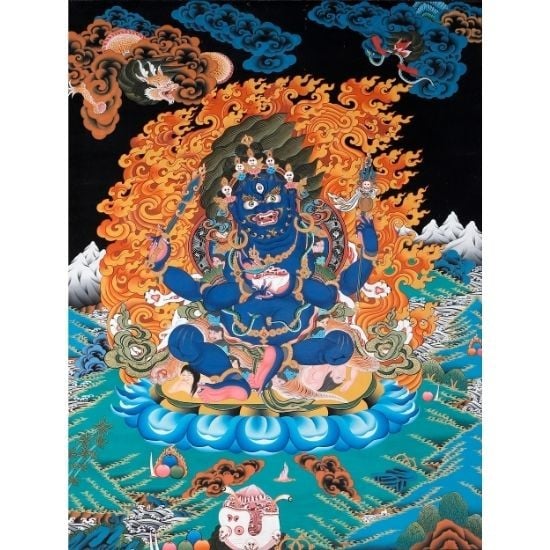 Color Symbolism In Buddhist Art
"...there exists in Buddhism the concept of a rainbow body... the rainbow body signifies the awakening of the inner self to the complete reservoir of terrestrial knowledge that it is possible to access before stepping over the threshold to the state of Nirvana..."