Bhasabodhini Dvitiya Patha (A Sanskrit Reader) is the second volume for the Sanskrit language teaching. The book contains an introduction providing the background and historical information on the development of Bhakti, followed by a section with texts, word meaning and structural analysis, a vocabulary list, a few simple exercises and verb-tables and appendices including a section on the category of Samasa.

Bh5s5bodhini DvitiyaNtha (A Sanskrit Reader Vol. 2) is the second volume for the Sanskrit language teaching programme conducted by the Council of Adult Education, Melbourne in 1985. This teaching material was produced for the adult students who had completed the beginning course and wished to continue their study of Sanskrit. The range of their backgrounds was varied - from computer programming, dancing, higher study, medical profession, religious practice, nursing and engineering to ordinary worker, and domestic duties. They were not pursuing this course for obtaining any academic degree, although some did take it as a preliminary to university courses. One of their purposes for studying Sanskrit was to be able to read texts in their original forms, and having completed the beginning course were no longer interested in transliteration. They were also interested in pronunciation, and some wanted to learn vocabulary useful for a particular discipline.

In a group situation with people of such varied backgrounds, I thought it a good idea to base this volume on a theme of common interest, acknowledging that each individual's specific needs and expectations might not be fulfilled. I found that many Sanskrit students were interested in Hindu religious or philosophical literature, and so, aiming to give incentive for self-development I chose the theme of Bhakti, On Devotion, as the chosen texts.

As most adult learners perceive the study of Sanskrit to be a conscious intellectual activity, I have attempted to provide the charnteristic features of the language through texts restricting to the chosen theme mainly. As understanding of the cultural context was considered important, some historical and relevant information have also been included. Attention has been drawn to the gradual development of Bhakti through texts from various sources composed at different stages of Hindu cultural history.

The structural format of this manual is as follows :

An introduction providing the background and historical information on the development of Bhakti, followed by a section with texts word meaning and structural analysis, a vocabulary list, a few simple exercises and verb-tables and appendices including a section on the category of Samdsa.

Dissemination of a cultural concept through language and achieving a level of linguistic competence are our primary intentions, with speaking of secondary importance. Learning through this volume can take place on an individual basis with minimum social interaction.

Most words have referential meaning. A dictionary gives a simple word meaning. But semantic context frequently is more important. Words acquire meanings in relation to the adjacent terms in a given context also accumulate various connotations in the long journey of a cultural history. Also it is important to have some knowledge on word classifications. Understanding all these factors of language leads to the ability of deriving meaning from a text as well as using words correctly. Therefore, elucidation of the grammatical notes is considered as a useful companion to the course. As one becomes familiar with the grammar, meanings of words, and syntactical patterns, comprehension skills improve.

This volume of Sanskrit teaching material is a product of my own personal experience. I have found that adult learning depends mainly on an individual's maturity, sincere effort and motivation rather than his/her level of education or training. Despite their different backgrounds, capabilities and interests, I am happy to report (record) that studying Sanskrit through original literature with the chosen theme Bhakti has worked quite well. Texts have been selected from the Upanishad, Bhagavadgita, Naradabhalctisritra, Srimadblidgavatam and Gitagovindam. 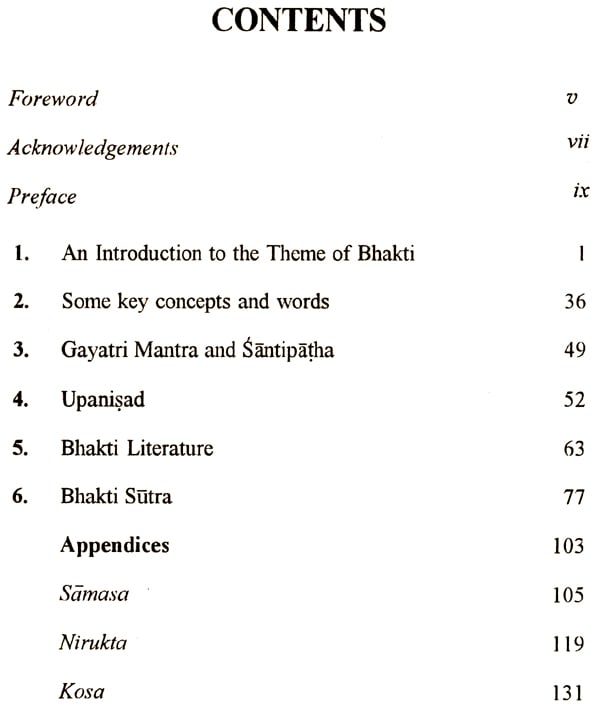 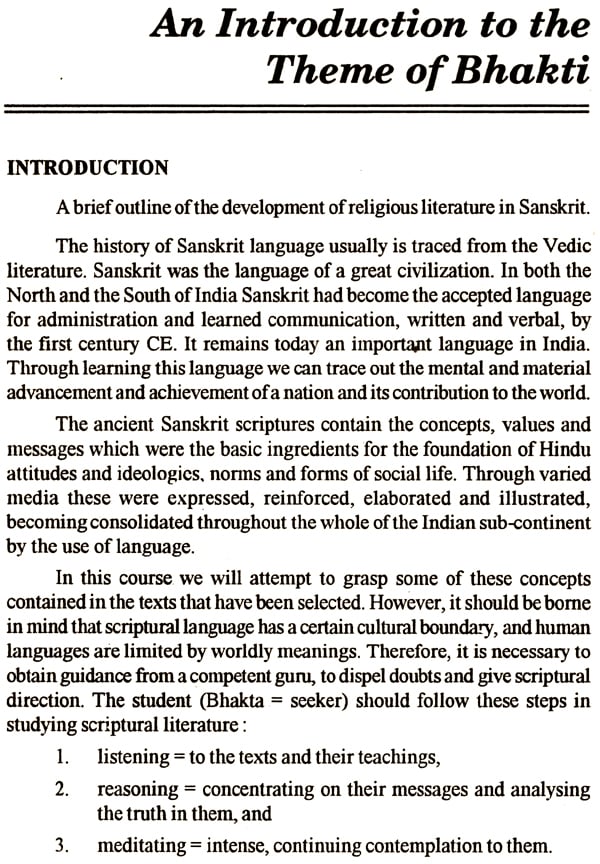 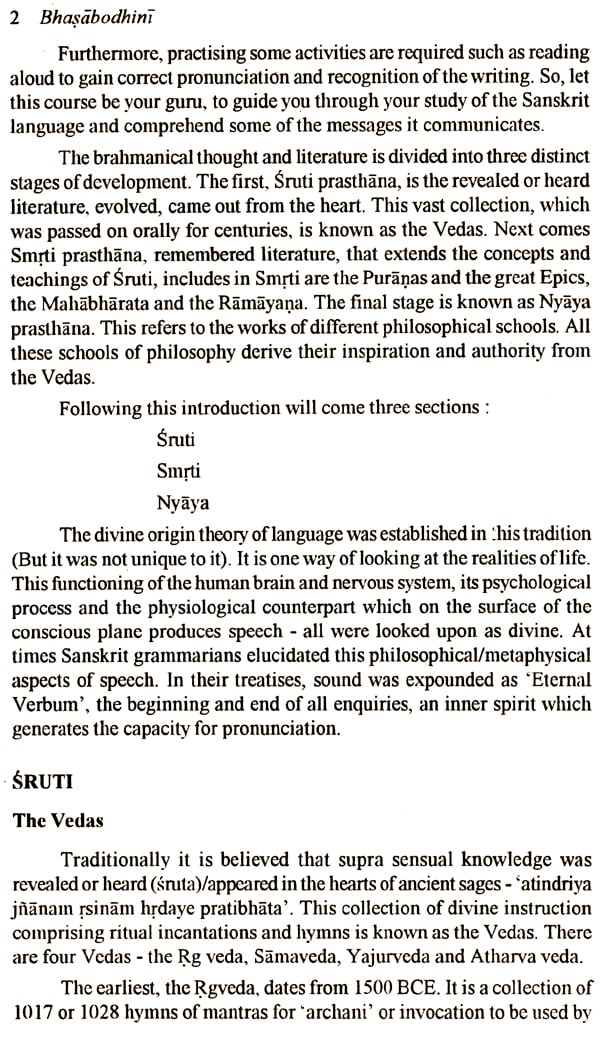 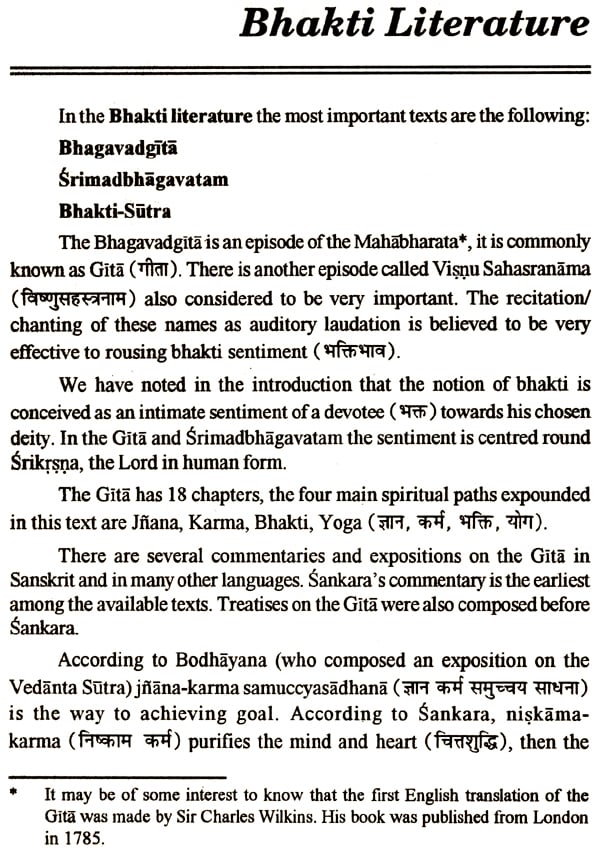 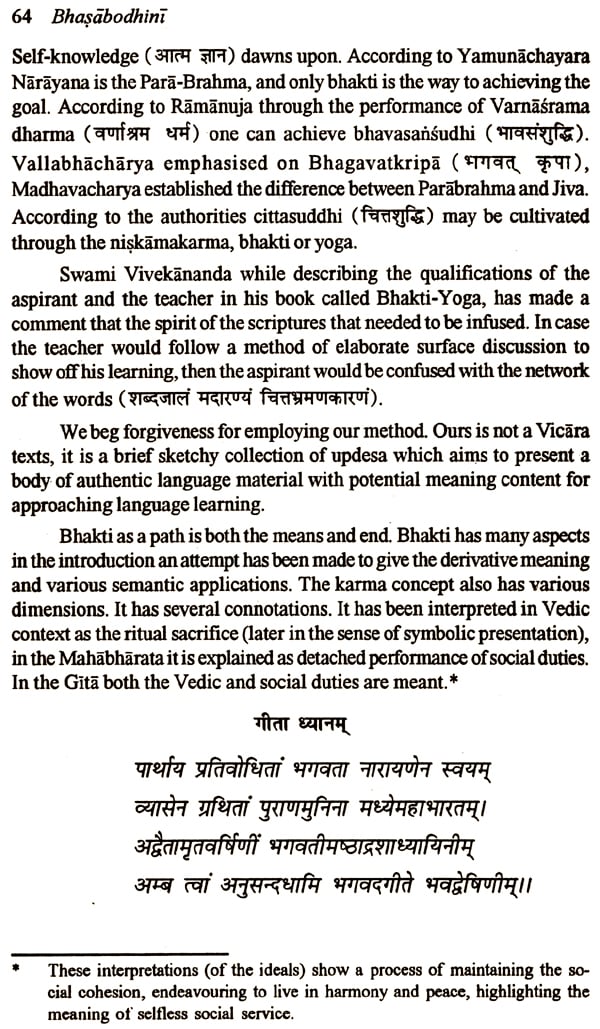 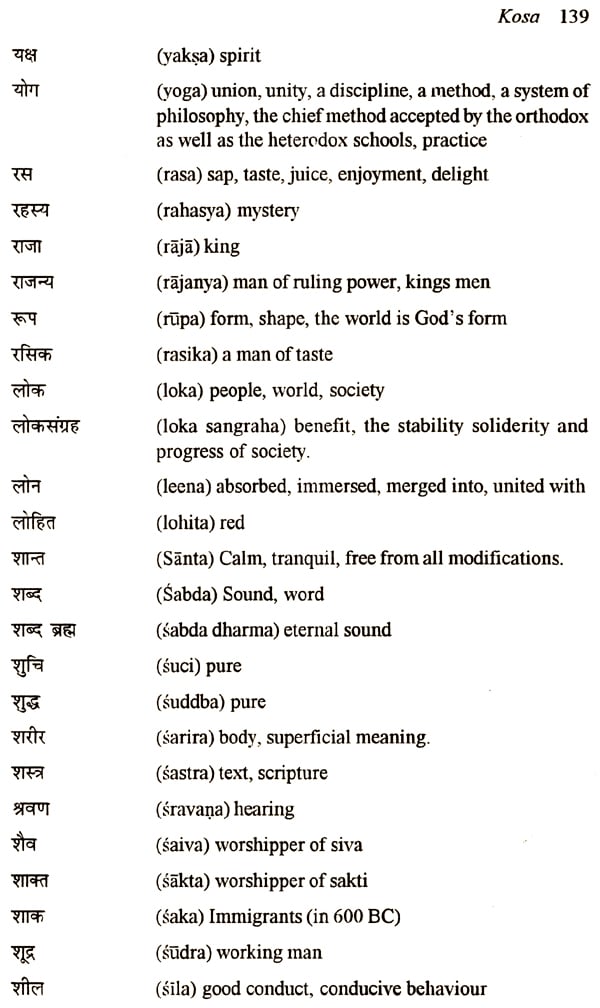 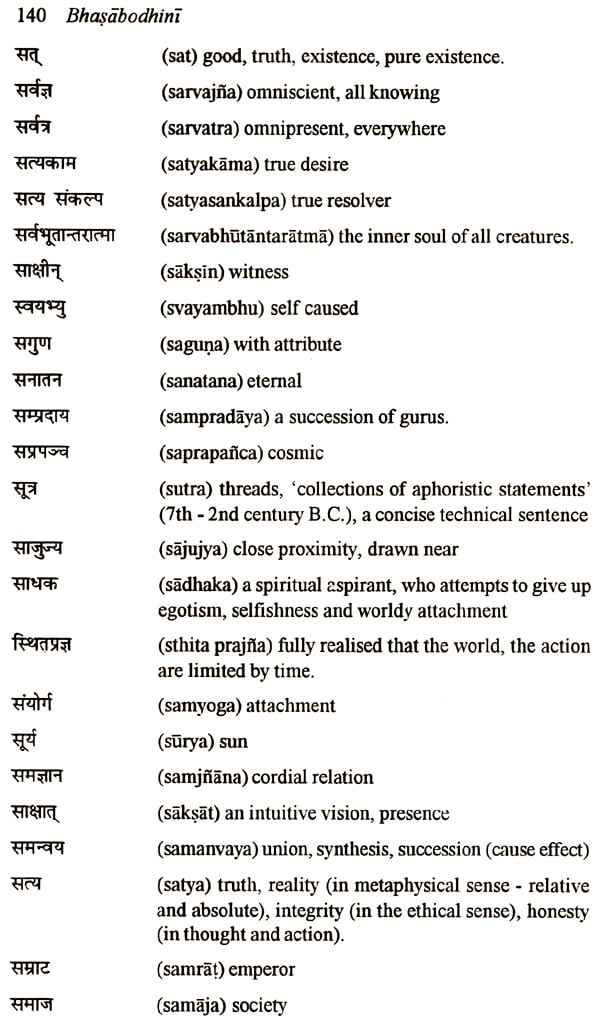