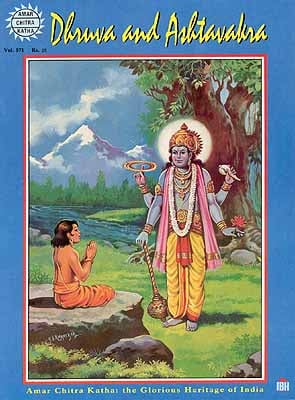 $8.50
Usually ships in 15 days
Notify me when this item is available
Save to Wishlist Send as E-card Share by Email
The story of Dhruva is taken from the Bhagawat Purana. Dhruva was hardly five years old when he observed severe penance to win the favour of Lord Narayana (Vishnu). The Lord was pleased with the faith of the child. He appeared before the child and told him that he would rule the earth for 36,000 years and thereafter occupy a very important place in heaven. Even to this day the Pole star is referred to as 'Dhruva Nakshatra' by tradition-loving Hindus.

According to the Vishnu Purana, Dhruva Nakshtra occupies a significant position in the cosmos; it is placed at the tail of the porpoise-like celestial sphere with Lord Narayana at the centre and as it revolves it causes the sun, the moon and the stars to revolve too.