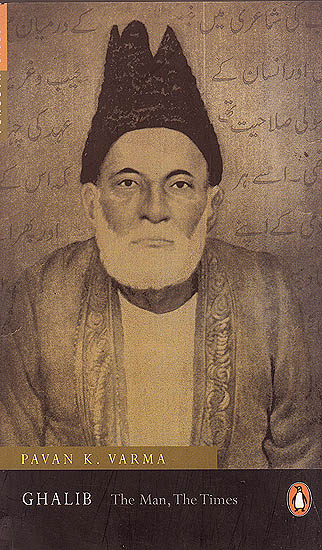 Mirza Mohammad Asadullah Khan Ghalib began writing poetry in Persian at the age of nine and the pre-eminent poet of the time, Mir, predicted a great future for the precocious genius when he was shown his verse. But success and material rewards did not come to Ghalib easily, for the times were against him, and he did not suffer fools, gladly even if they occupied positions of importance.

Ghalib was at the height of his powers when events took a turn for the worse. First came the decline of the Mughal court, then the rise of the British Empire and, finally, the Revolt of 1875. Thought Ghalinb lived through the upheavals and purges of the Revolt, in which many of his contemporaries and friends died and his beloved Delhi was irrevocably changed, he was a broken man and longed for death. When he died, on 15 February 1869, he left behind some of the most vivid accounts of the events of the period ever written. In this illuminating biography Pavan K. Varma evocatively captures the spirit of the man and the essence of the times he lived in.

Pavan K. Varma was born in 1953 in Nagpur. He graduated with honours in History from St Stephen’s College, Delhi and then took a degree in Law from Delhi University. While at University he was president of his college debating society and also won the Sir C. P. Ramaswamy Aiyar Memorial English Essay Prize in 1973.

He is married, with two daughters and a son, and lives at present in New Delhi.

Some years ago, I went to a well-known bookshop in Delhi and asked for a book on Ghalib. I was told they had none. A search in some other bookshops yielded a few extended booklets, mostly translations into English of some verses of his Urdu Diwan. I found this situation very strange. It was like going to a bookshop in London and being told that they had no books on Yeats or Eliot, given that in northern India especially Ghalib is a household name; his Urdu verses tend to crop up in everyday conversation and stories of his humour and hazir jawabi are part of familial anecdotage in most homes.

But the example of the bookshop that did not stock Ghalib is only one indication of the cultural malaise that stalks our times. I find it interesting that Ghalib, or for that matter, so much else of what constitutes our cultural heritage, has survived today in spite of the post-1947 generation. Most of the people of my age in India—and I am no exception—have grown up as cultural orphans: they have learnt neither Sanskrit nor Urdu and so remain (sometimes sheepishly) incurious about a cultural heritage that may soon dry up due to the indifference of their response. This book, therefore, is not just an act of homage to a great man. It is, on a deeply personal level, an act of penance and a pilgrimage, an effort to overcome in my own life the sense of inadequacy many of my age have felt growing up in such culturally nondescript times.

There is another aspect to the book that I would like to explain. To most of us, history remains merely an account of the remote past. The history of more recent periods, even if it manifests itself in our everyday existence, is ignored in the overwhelming crush of municipal concerns and the struggle for daily survival. Most citizens of Delhi may know in broad, generic terms of the Mughal period as it pertains to Delhi, but have almost no knowledge of what Delhi was like as recently as in the last century. In this context, it is significant that Ghalib, apart from being one of our greatest poets, was through his letters (of which he was a prolific writer) a chronicler par excellence of his times. He lived in Delhi through a fascinating period. Mughal power was slowly but surely fading away. The British had ensconced themselves as the de facto rulers. Ghalib, who prided himself on belonging to the feudal nobility, was caught between his loyalty to the Mughal king and his need to cultivate the new rulers, from whom, in the form of his hereditary pension, he received his only source of income. The period of Mughal political decline coincided, ironically enough, with a phase of unprecedented literary efflorescence. Urdu, hitherto the plebeian cousin of Persian, came into its own and acquired a new sophistication, self-assurance, maturity and authenticity that manifested itself in myriad ways, not the least of which was the increasing sway of the eclectic Sufi toriqah and secularism over Delhi’s way of life. Ghalib’s writing and life illumined and mirrored the different facets of Delhi—its problems, diversions, pettiness, achievements, despairs—in a manner rarely seen.

The Revolt of 1857 and its aftermath put an abrupt and traumatic end to Ghalib’s Delhi. It signaled the beginning of a new era and the end of the old. Ghalib was perhaps the only great poet in Delhi (Zauq and Momin had died earlier) who lived to see 1857, and its fallout. His role in this event and the manner in which he and others of his class were affected by it is of tremendous interest, both from the point of view of an assessment of Ghalib the man and from the historical perspective.

To turn from the genesis to the making of it. I have greatly enjoyed writing it. Indeed the very writing of it was its greatest reward. After a day of peddling files in office, to sit quietly in my study and work on the manuscript was something that never failed to provide solace. I do not claim to be an Urdu scholar, or even a scholar of Ghalib’s poetry. Although I graduated in history I do not claim to have the qualifications of a historian. This book is, therefore, not a literary treatise on Ghalib’s poetry, nor a historical dissertation. It is merely an attempt to paint a portrait of Ghalib the man, and through him, of the Delhi in which he lived. If it succeeds in arousing the interest of even a few, it would have, from my point of view, served its purpose.

I would like to record my gratitude to Dr Ravindra Kumar, Director, Nehru Memorial Museum, New Delhi, and to Professor Philip Oldenberg of Columbia University, New York, both of whom read portions of the manuscript and offered encouragement and advice. My gratitude also to Dr Narayani Gupta, who willingly gave guidance whenever I asked; special thanks to H. K. Kaul, the able historian of the India International Centre, New Delhi, and to Sushma Zutshi and Namita Ganguly who work with him. For making my visits to the National Archives of India worthwhile, I would like to thank J.P. Balani, the Assistant Archivist. A word of appreciation is also due to the very efficient staff at the India Office Library in London and at the New York Public Library. I am indebted to my dear friend Urmila Dongre for her assistance in putting together the photographic section of this book, and to Zoheen Naqvi of the Ghalib Academy for his gracious, old world courtesies. To Khushwant Singh, ever willing to help a first-time author, a very special word of thanks. For assistance without demur, I have no words to express my gratitude to Arturo Lozano, my good friend in New York, who word processed the manuscript. A salute of appreciation to Zamir Ansari; also special thanks to Sudha Sadhanand and Bindu Badshah for theft infinite politeness in maintaining that they were enjoying the task of making the manuscript readable. And lastly, and perhaps mostly, my heartfelt gratitude to David Davidar, for his unique ability to allow the professional detachment of an editor to express itself in terms of such genuine warmth and personal interest.

For permission to reproduce photographs or documents in their possession, I am grateful to the India Office Library in London (plates 12 to 16), to the National Archives of India, New Delhi, (plates 6 to 8), to the Ghalib Academy, New Delhi (plates 1, 3, 4, 9 and 11) and to the Librarian, India International centre (for access to the India collection) (plates 2 and 10).

One final word. This book would not have been possible but for Renuka, my wife, who in spite of a most trying husband managed to preserve effectively and embellish that sociologically threatened entity called the home. If I have been able to write anything at all, it is because her unique presence created the ambience for me to do so. My two daughters, Manvi, now ten, and Rajasvi, seven, and my son Vedanta, five, provided a many-splendoured distraction, but for which I would certainly have finished this book earlier.