The Magic Therapy of Colours

In vogue since ancient times, colour therapy has now come of age as a holistic of treatment. Global research justifies the application of colour in many disorders. Administered by trained practitioner, colour therapy is safe, complementary to the others systems and relatively inexpensive in India.

Modern man spends most of his life cooped up within homes, offices or automobiles. Thanks to the odd hours the keep, some people even spend a few months without being exposed to sunlight. The body and mind are casualties when we miss out on the invigorating colour vibrations present in nature. The good health of ancient was partly because they allowed all colours in nature to energise their bodies by being outdoors during the day. Having the proper balance of healthy colours in the interiors of our homes and offices can partly rectify this shortcoming.

The Magic Therapy of Colours outlines the history of colour therapy, modern methods of utilizing colour and the areas it is beneficial in. the book is an invaluable guide for those seeking holistic benefits from colour therapy.

A.R. Hari is an engineer by profession and has studied colour therapy for over a decade as a science. He has successfully projected the methodologies of the working of colour therapy in a scientific manner in this book. According to the author, colour therapy is basically a science dealing with various energy fields inside the body.

He has written books on alternative systems. His earlier books, Vaastu Corrections without Demolitions and Water - A Miracle Therapy, published by Pustak Mahal, we highly appreciated.

Colour therapy has been in vogue since ancient times. Hindus have always considered different colours as manifestations of the Supreme Lord.

The following lines succinctly outline the relationship between colours and God:

The Lord is supreme and is the God of gods. He controls time and time rests in Him. He illumines the world with His brilliant hues. Of these, seven are most important and I bow to them.

It is quite clear that much before Western scientists proved through the prism spectrum that white light was made up of seven colours, ancient Indian sages were well aware of this fact.

From the early stages of human evolution colour has aroused the interest of man. This is quite natural as nature is filled with colour. Everywhere we look around us, greenery is predominant in nature.

There are other rich colours in nature, too.

The sky is blue, but takes on breathtaking hues when the sun's rays play with the clouds during sunset. At such times, one can see red as well as violet, which lights up the entire sky. The rainbow is another beautiful phenomenon where all the seven colours in the spectrum stand out brilliantly across the sky. 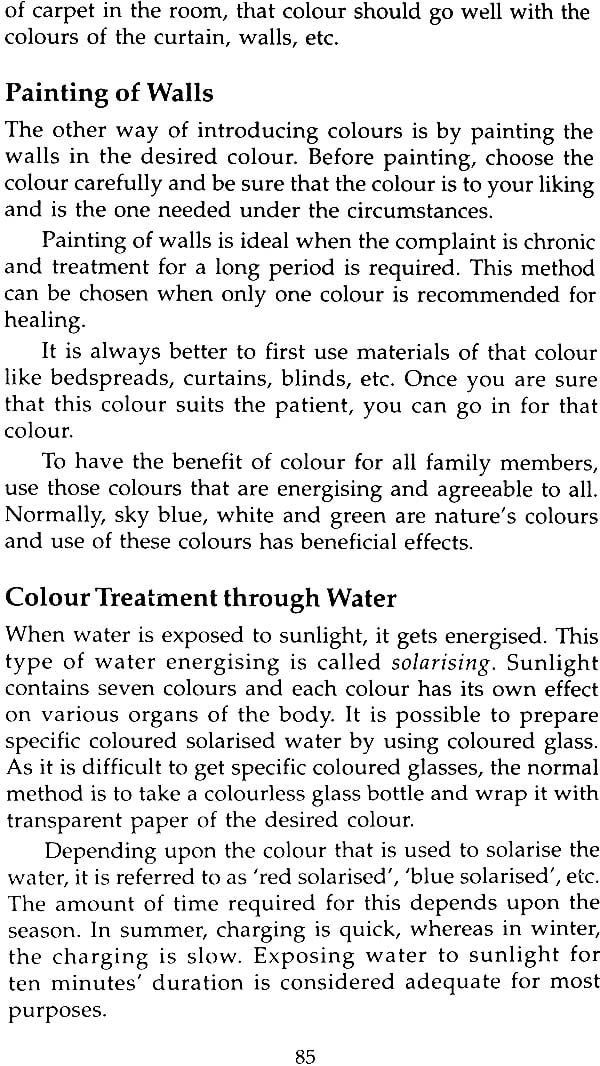 NATUROPATHY: A Non-Harming Therapy (The Most natural way of keeping the body in order)
By Dr. Rajeev Sharma, M.D., D.Litt.
$15 The Secret Benefits of Juice Therapy
By Vijaya Kumar
$12.50 Unfolding the Veil of Mystery: VAASTU (The Art of Science of Living)
By Er. Ashwini Kumar
$43
FREE Delivery
Best Seller