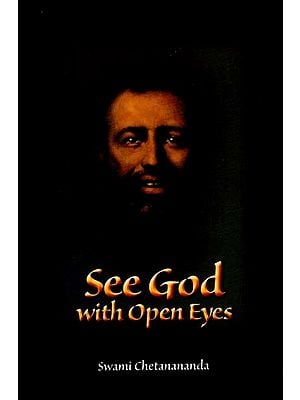 See God with Open Eyes: Meditation on Ramakrishna. - this title raises several questions: Does God have a form? Can we see God as we see other objects and beings in this world? Can we hear or touch God? Ramakrishna answered these questions with his words and through his life - and many of those answers are collected in this book. Apart from the mystics and illumined souls, many people doubt the existence of God and think that it is impossible to see God with their eyes open. The doubters' misgivings will be dispelled only if they practise spiritual disciplines according to the guidance of an illumined teacher. Many mystics of different religions have testified that they have seen God and heard God's command. Moses heard the voice of God from within a burning bush, "I am that I am." Later he received the Ten Commandments from God on Mount Sinai.

Saint Teresa of Avila saw Jesus and talked to Him. God watches every being. A disciple of a Sufi saint experienced this. The saint wanted to test his disciples' spiritual progress. In the morning, he gave a chicken to each one of them and asked them to slash its throat in a secluded place where no one could see this. Most of the disciples returned after following their teacher's order, but one disciple did not return. In the evening, he finally returned with the live chicken and told the teacher: "I saw that God was watching me, so I could not find any secluded place in which to kill the chicken."

Shortly after Ramakrishna passed away, he appeared to Holy Mother. On 16 August 1886, the Master's-body was cremated and his ashes were brought in an urn to the Cossipore garden house. That evening Holy Mother began to remove her jewellery, following the custom of Hindu widows. As she was about to take off her bracelets Ramakrishna appeared before her, looking as he did before he was stricken with cancer. Holding her hand, he said: "Am I dead, that you are acting like a widow? I have just moved from one room to another." She did not take off the bracelets, and instead wore them as long as she lived.1 Swami Vivekananda wrote in the Rule Book of Belur Monastery: "The Lord has not yet given up the Ramakrishna form. Some see Him in that form even now and receive instructions from Him, and all can see Him if they so desire.

This form will last until He comes again in another gross body. Though He is not visible to all, that He is in this Order and guiding it is a fact of everybody's experience."2 In fact, if one sees an Incarnation of God it is the same as seeing God. Jesus also said: "Whoever has seen me has seen the Father" (John, 14:9). Someone once asked Swami Brahmananda, "Can one see Ramakrishna even now?" The swami replied: "Yes, Swami ji saw the Master many times. We also see him from time to time."3 It is mentioned in the life of Swami Vivekananda that in 1894 at a dinner in Detroit, some vindictive people added poison to his coffee. When Swami ji was about to drink it, he saw Ramakrishna standing by his side, saying, "Don't drink. That is poison." The Vedanta scriptures such as the Upanishads and the Bhagavad Gita emphasize that Brahman or the Atman cannot be perceived through our eyes or through any of the other senses.

The Shvetashvatara Upanishad says: "His form is not an object of vision; no one beholds Him with the eyes. They who, through pure intellect and the Knowledge of Unity based upon reflection, realize Him as abiding in the heart become immortal" (4:20). The Mundaka Upanishad says: "Brahman is not grasped by the eye, nor by speech, nor by the other senses, nor by penance or good works. A man becomes pure through serenity of intellect; thereupon, in meditation, he beholds Him who is without parts" (3:1:8). In the Gita, before showing Arjun a his Universal Form, Krishna said to him: "With these eyes of yours you cannot see Me. I give you a divine eye; behold, now, My sovereign yoga-power" (11:8). These statements from the scriptures tell us that we cannot see Brahman or God with human eyes; we need divine eyes, or spiritual eyes.

Scientists use telescopes to see planets that are beyond our perception; they also use microscopes to see minute things that our eyes cannot see. There is no doubt about this because it is a scientific truth. Similarly, we need spiritual eyes to see the unseen God, and this divine sight develops through meditation and other spiritual practices. The Guru Gita says: "Salutations to the Guru who with the collyrium stick of knowledge has opened the eyes of one blinded by the disease of ignorance." On 24 August 1882, M. asked Ramakrishna: "When one sees God, does one see Him with these eyes?" The Master replied: "God cannot be seen with these physical eyes. In the course of spiritual discipline one gets a premer sharir, love body, endowed with premer cakshu, love eyes, premer karna, love ears, and so on. One sees God with those 'love eyes.' One hears the voice of God with those 'love ears.' "But this is not possible without intense love of God. One sees nothing but God everywhere when one loves Him with great intensity. It is like a person with jaundice, who sees everything yellow.

Then one feels, 'I am verily He.'"4 On another occasion, Ramakrishna said: "One cannot see God if one has even the slightest trace of worldliness. Matchsticks, if damp, won't strike fire though you rub a thousand of them against the matchbox. You only waste a heap of sticks. The mind soaked in worldliness is such a damp matchstick. Once Sri Radha said to her friends that she saw Krishna everywhere, both within and without. The friends answered: 'Why, we don't see Him at all. Are you delirious?' Radha said, 'Friends, paint your eyes with the collyrium of divine love [anurag-anjan], and then you will see Him.'"5 Ramakrishna went to the Brahmo Samaj and found the members meditating with their eyes closed. He told Vijay Goswami, a Brahmo leader: .

"There was a time when I too would meditate on God with my eyes closed. Then I said to myself: 'Does God exist only when I think of Him with my eyes dosed? Doesn't He exist when I look around with my eyes open?' Now, when I look around with my eyes open, I see that God dwells in all beings. He is the Indwelling Spirit of all - men, animals and other living beings, trees and plants, sun and moon, land and water."6 The goal of this book is to train our eyes to see God in all. Sarvabhute brahmadarshan - seeing or experiencing Brahman in every being and everything is the culmination of Vedantic experience. The Chandogya Upanishad tells us, "Sarvam khalu idam brahma - Truly, all this [the visible universe] is Brahman." 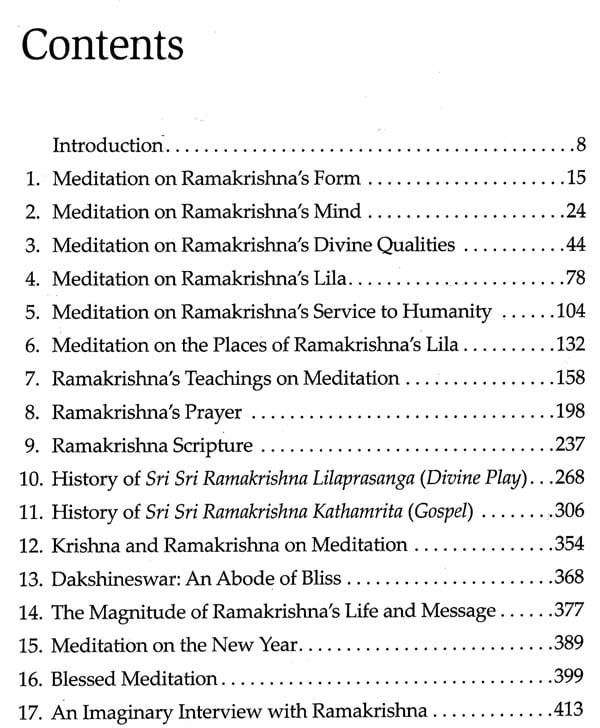 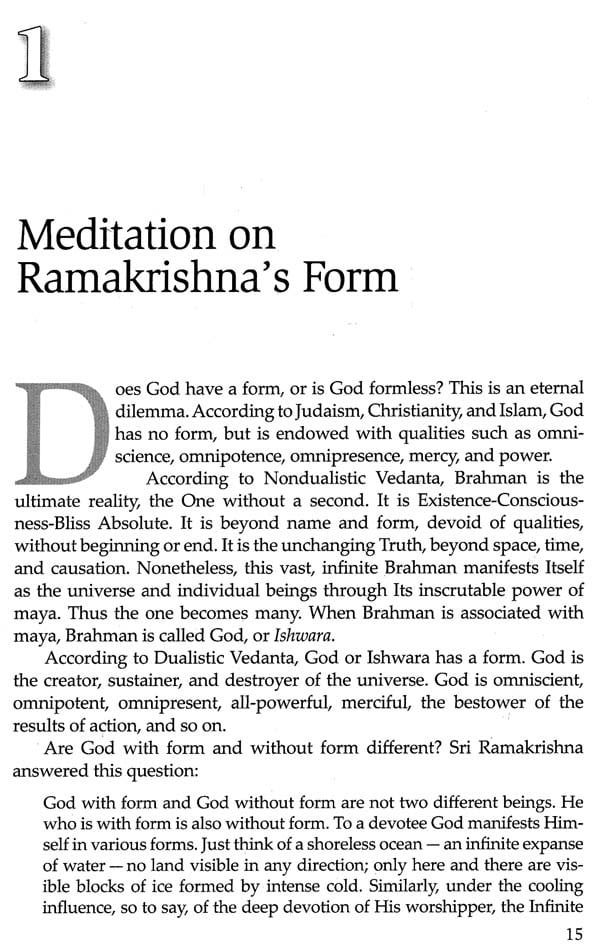 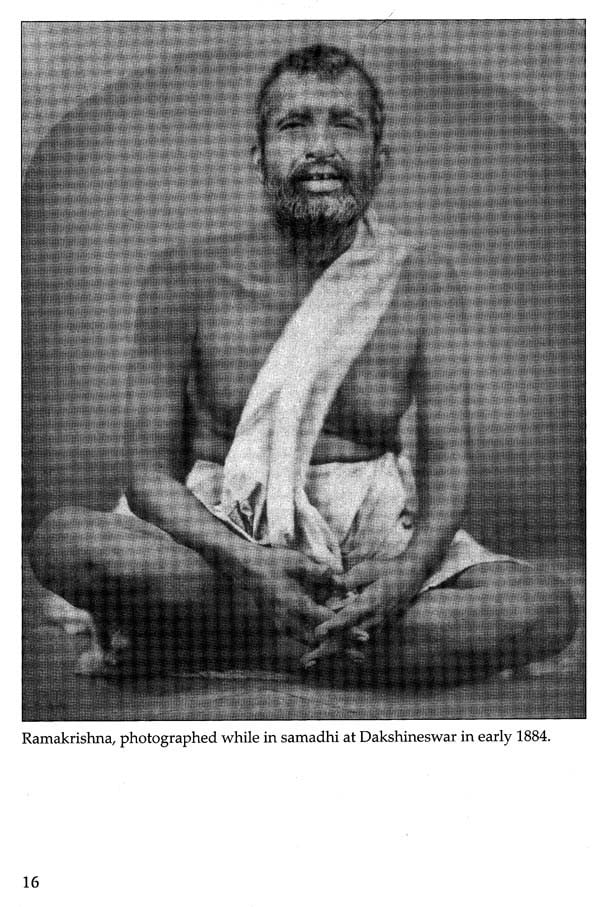 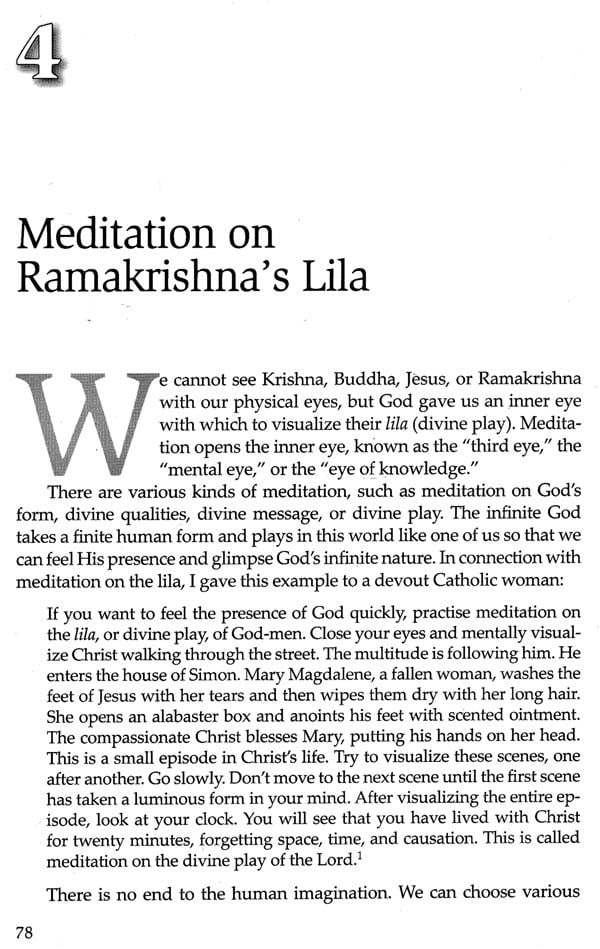 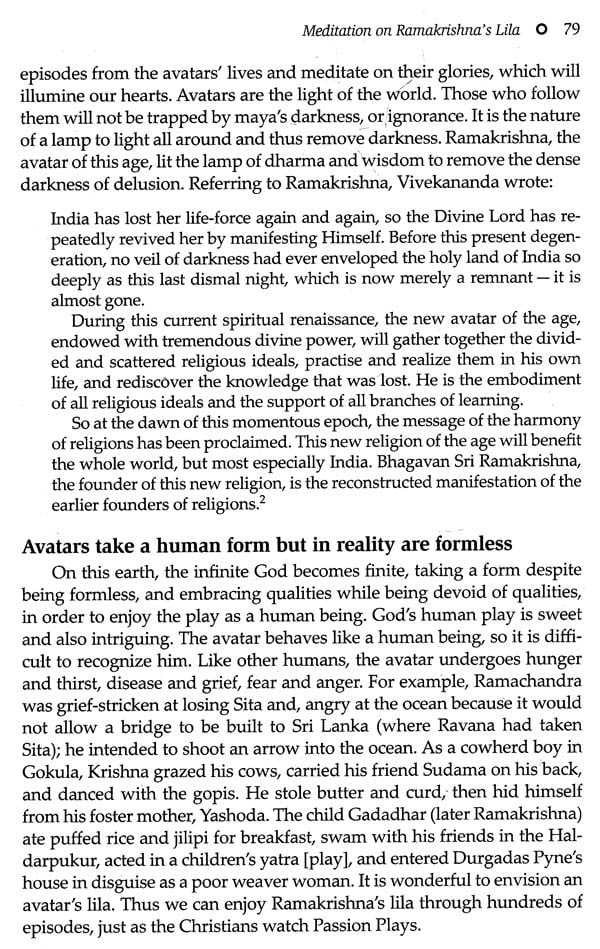 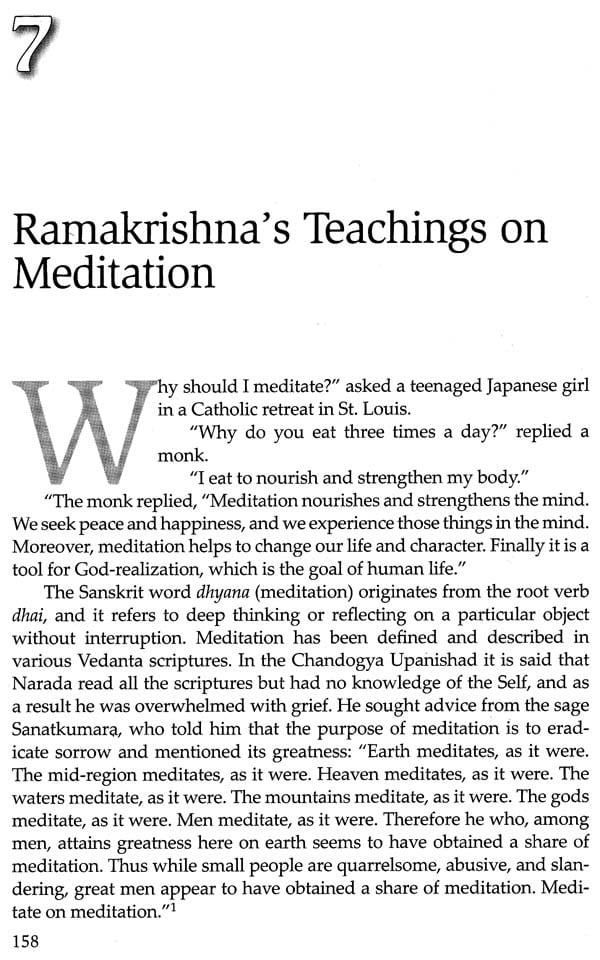 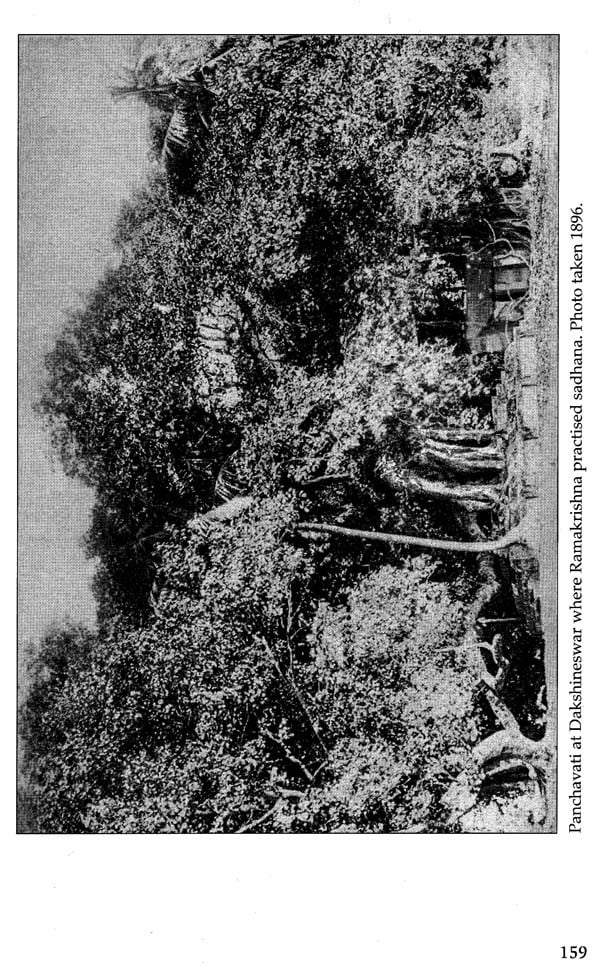 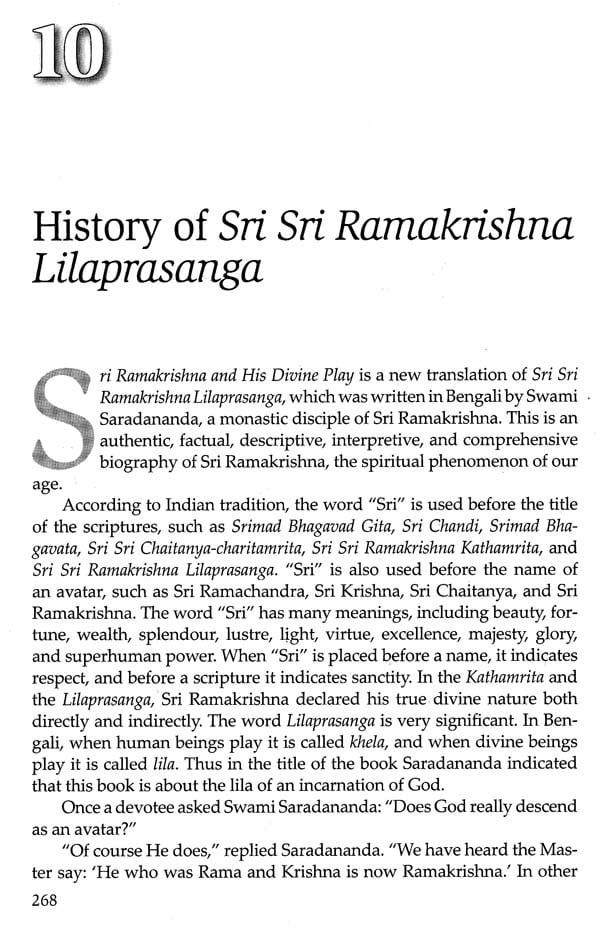 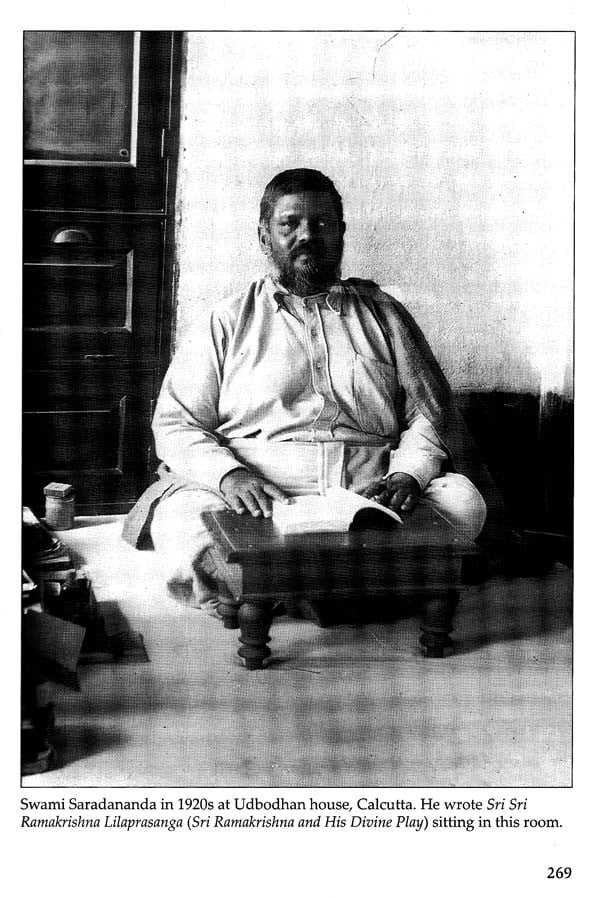 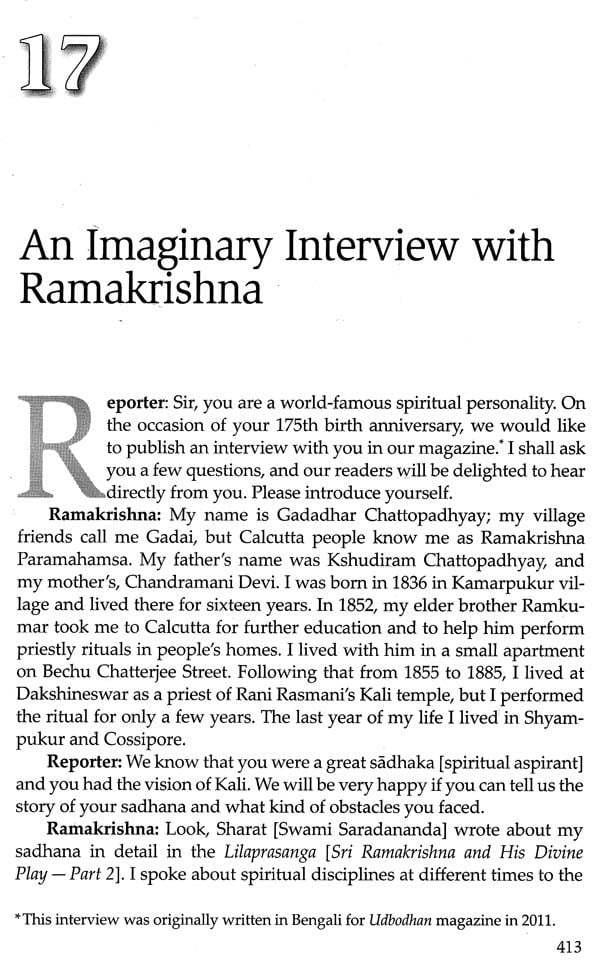