Wisdom from the Ramayana - On Life and Relationships

Chaitanya Charan is a mentor, life coach, and monk, Building on his engineering degree from the Government College of Engineering, Pune, he complemented his scientific training with a keen spiritual sensitivity. For over two decades, he has researched ancient wisdom texts and practised their teachings in a living yoga tradition.

Author of over twenty-five books, he writes the world's only Gita-daily feature (gitadaily.com), wherein he has penned over two thousand daily meditations on the Bhagavad-gita. Known for his systematic talks and incisive question-answer sessions, he has spoken on motivational and spiritual topics across the world at universities such as Stanford, Princeton, and Cambridge, and companies such as Intel, Microsoft, and Google.

As a speaker on spiritual subjects, I am often given specific topics to talk about. Once I was asked to speak on the Ramayana as Ram Navmi was just round the corner. I wanted to make the class relevant for the audience. And I was especially concerned about two of my friends who had been close to each other, but had recently become alienated because of a misunderstanding.

Somehow I felt inspired to speak the Vali- Sugriva story. I spoke how the two brothers had been the best of friends,' but had ended up as mortal enemies-all due to a series of misunderstandings. While speaking, I felt intrigued by the close parallels of that story with the situation on my mind. Later I came to know that those two friends had felt moved by that talk to come together for clarification and reconciliation.

I felt grateful because my talk had emerged without any conscious preparation on my part. But as I journaled about the incident later, I sensed I might be on to something bigger. So I wrote an article on that talk's theme and published it on my website thespiritualscientist.com. When several readers appreciated the article, I felt inspired to write more similar articles. I decided to reread the Ramayana from the perspective of relationships and I discovered a treasure trove hidden in plain sight.

As an Indian, the Ramayana had always been in plain sight for me, being integral to the country's cultural fabric. I was introduced to the Ramayana in my early childhood through the stories told by my grandparents and parents. Right next to our house in Chandrapur, Maharashtra, was a small Hanuman temple, and just behind our house was a Rama temple. When I was in primary school, we relocated to Nasik, the place where Rama had lived during exile. In our house in the bedroom hung a picture of Hanuman carrying a mountain. That picture is one of my foremost memories of the Ramayana. My father, who always provided me with abundant books, gave me Amar Chitra Katha issues that depicted various Ramayana stories. When the epic was televised for the first time, I watched it eagerly.

When I was studying engineering, I was introduced to the intellectual depth of the bhakti tradition through the writings of my paramguru Srila Prabhupada and his followers. I found the wisdom so appealing and fulfilling that I decided to dedicate my life to studying and sharing it. During my studies as a monk, I heard Ramalila narrated by my guru Radhanath Maharaja and was swept in by its sweetness. I also came across the Ramayana retold by Krishna Dharma and was captivated by its vivid visual imagery and linguistic elegance.

But when I stumbled on the relationship-focused perspective for approaching the epic, it came alive for me like never before-its relevance was no longer hidden. Thereafter I re-studied the epic, referring to the original Sanskrit and its translations, those published by Gita press and those available at valmikiramayan.net. I also found illuminating the many commentaries available at valmiki. illuminating. I scanned through the various retellings of the Ramayana in the Mahabharata, the Puranas, and in the vernacular renditions.

All these studies deepened my appreciation of the Ramayana, especially its eminent relevance.

The Ramayana presents an intriguing blend of human- divine relationships. The name 'Ramayana', which means 'the journey of Rama', is an eponym referring to its central character. While Rama is understood in the bhakti tradition to be God descended to this world in a human form, the Valmiki Ramayana focuses not on his divinity, but on his seeming humanity. Indeed, the seminal question that leads to the unfolding of this original Ramayana is: What are the qualities of an ideal human being? In answering this question, the epic places the divine in the midst of human relationships. The Ramayana's beauty lies in, among other things, the sweetness and selflessness of the relationships it features. Its central characters exude a timeless charm that has spoken to the hearts of millions for millennia. While the Ramayana's world features some characters that might seem mythical to us now, still they have emotions like ours; they face dilemmas like we do; and they make choices and endure consequences just as we do. Thus, they are more similar to us than they might appear at first.

Our specific situations will be different from those of the Ramayana characters; still, underlying those differences are universal principles that can guide us even today. This classic speaks to us not by asking for replication of everything it depicts, but by inspiring us towards emulation of the timeless principles it demonstrates. By coming to know its characters from this principle-centred perspective, we can come to know ourselves better. Additionally, reading the Ramayana nourishes our relationship with the supreme divinity, Rama. And as Rama is all-pure, contemplation on him helps free us of the impurities that make us act impulsively, thereby undermining our efforts to improve our relationships. Our essential self-the soul-is like a precious stone buried under the layers of impure mental impressions. Just as the effulgence of a jewel shines forth once it is excavated and cleaned, similarly, the natural qualities of the Soul shine forth when we excavate it from layrs of impure impressions and purify ourselves by cultivating devotional impressions. Meditating on the Ramayana offers such purification and thereby helps us to discover moral muscles that we didn’t know we had. Thus, reading the Ramayanana from the perspective of relationships is immensely empowering. The epic offers not just knowledge about the right action, but also moral strength to act rightly. 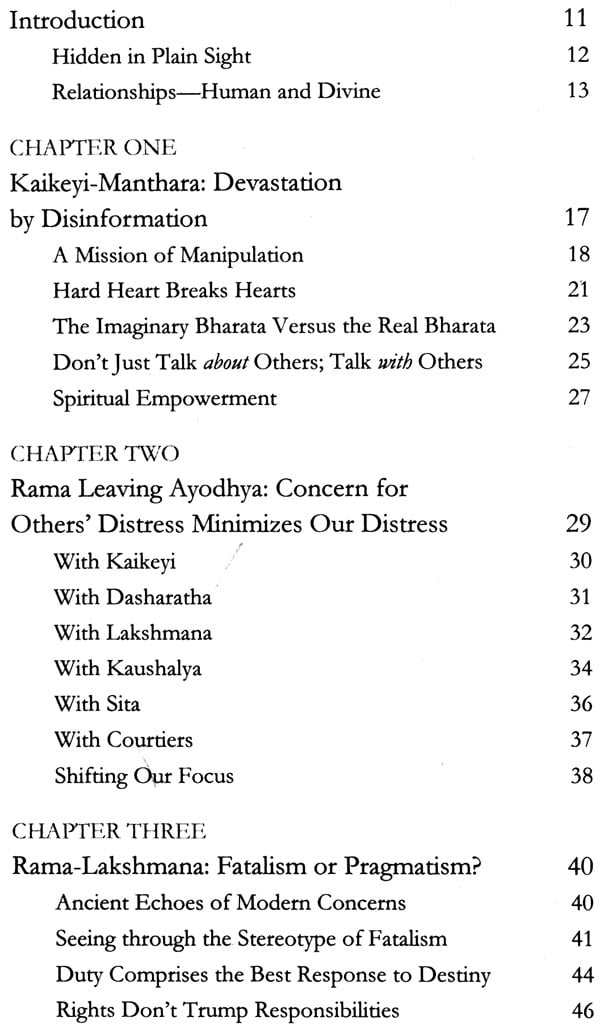 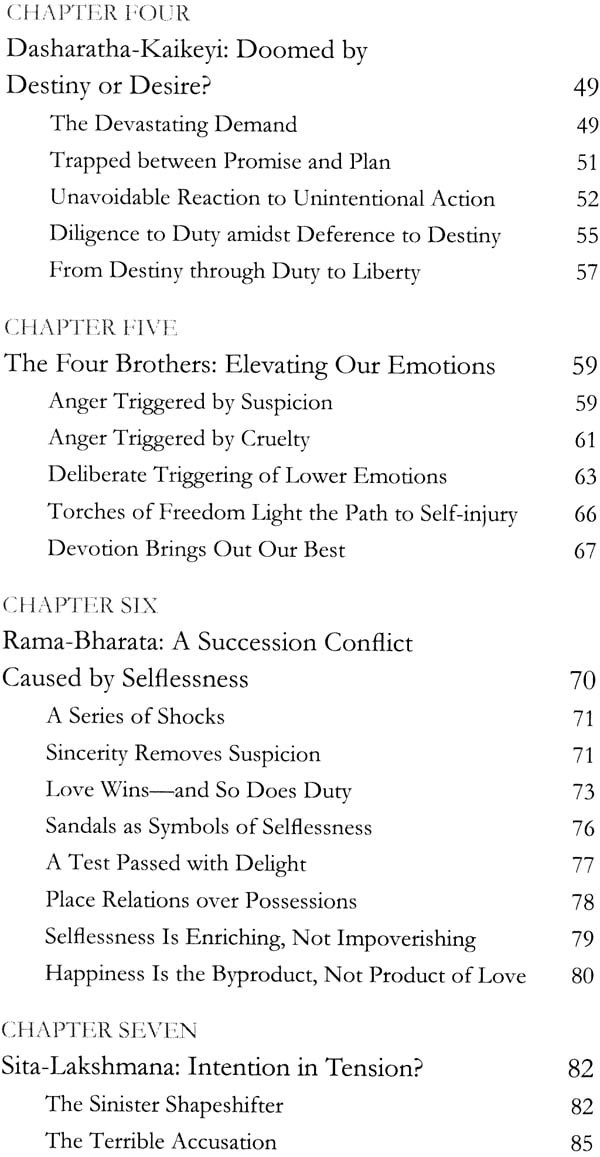 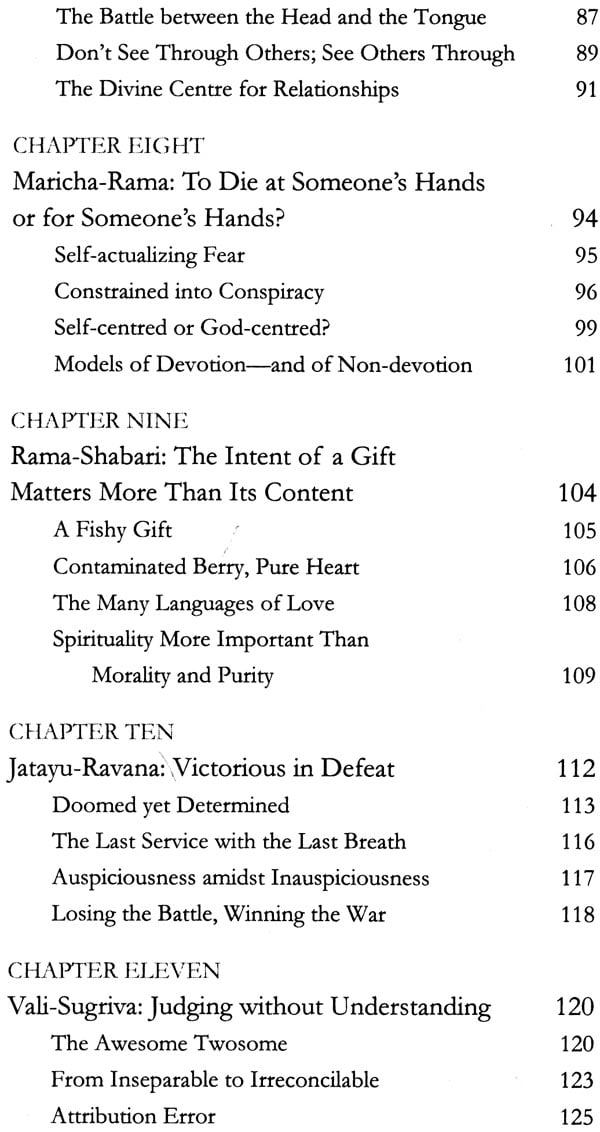 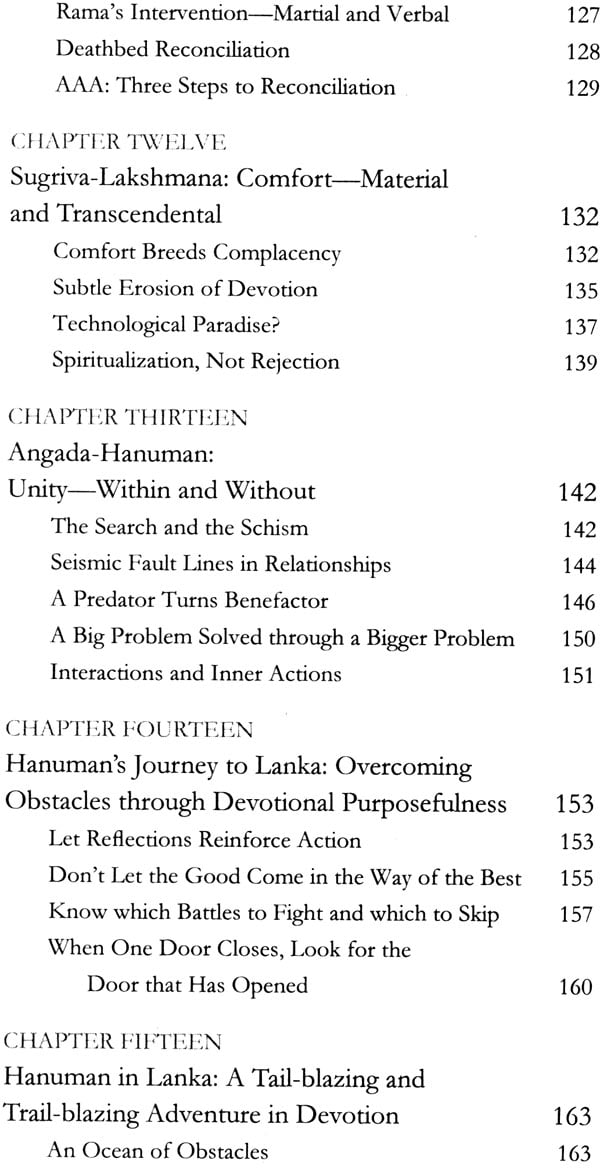 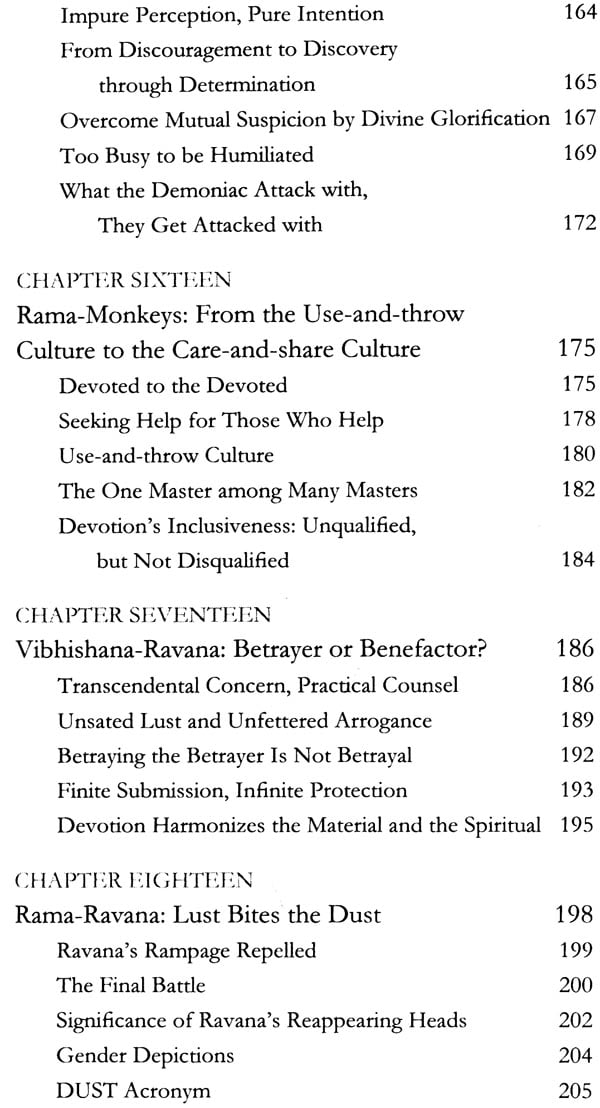 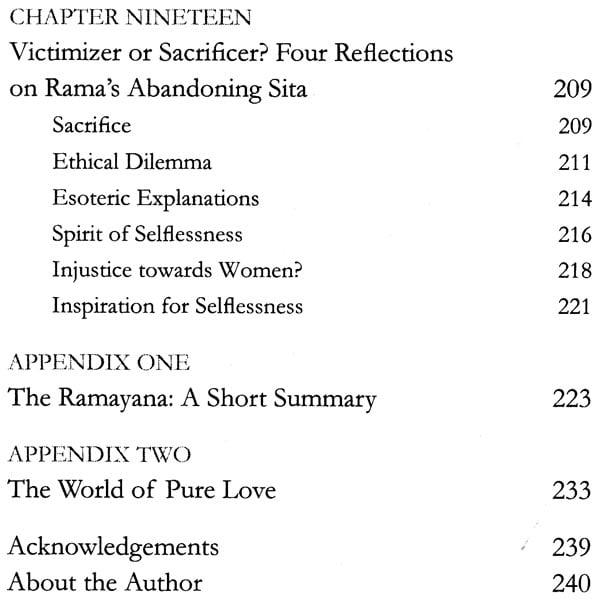 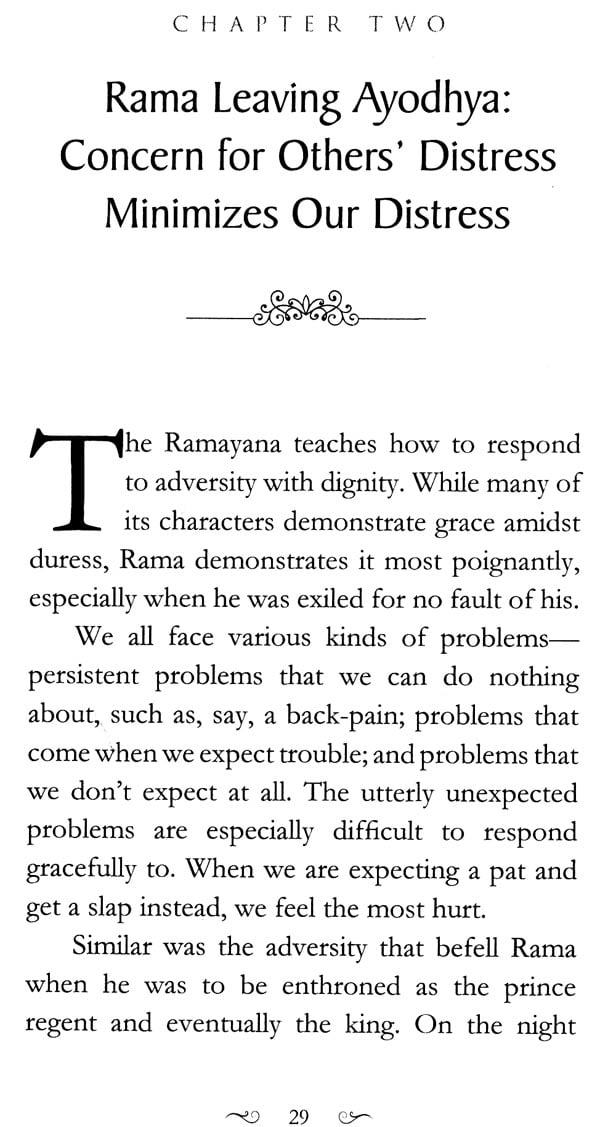 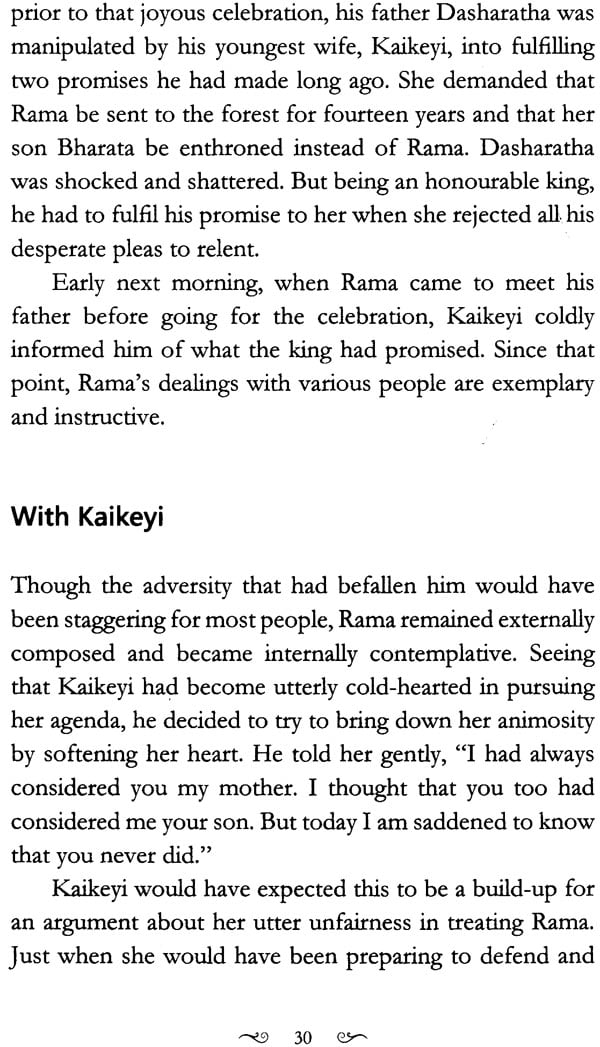 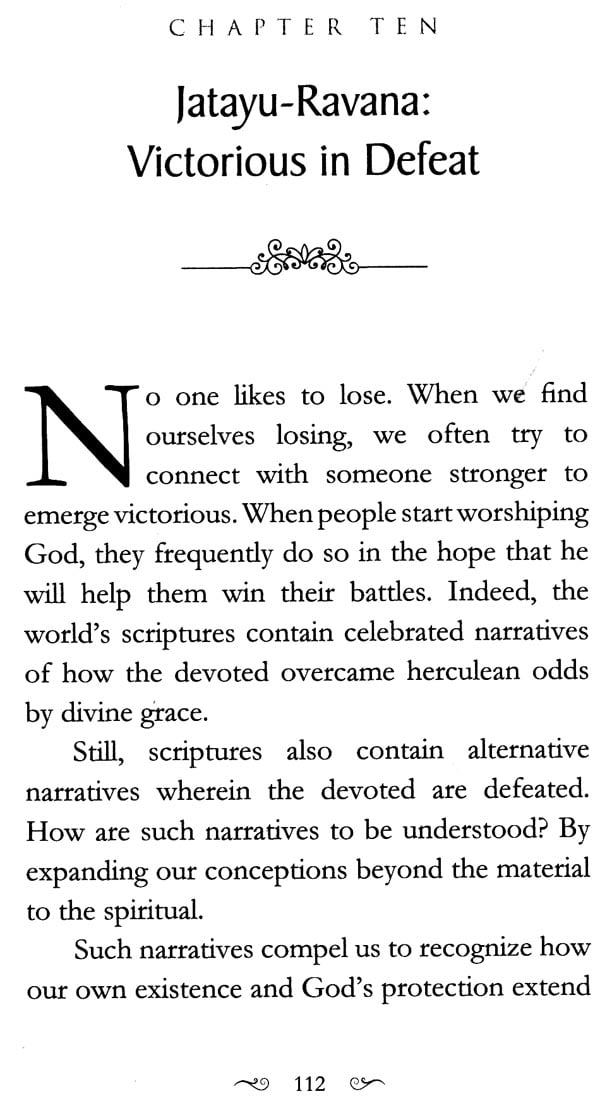 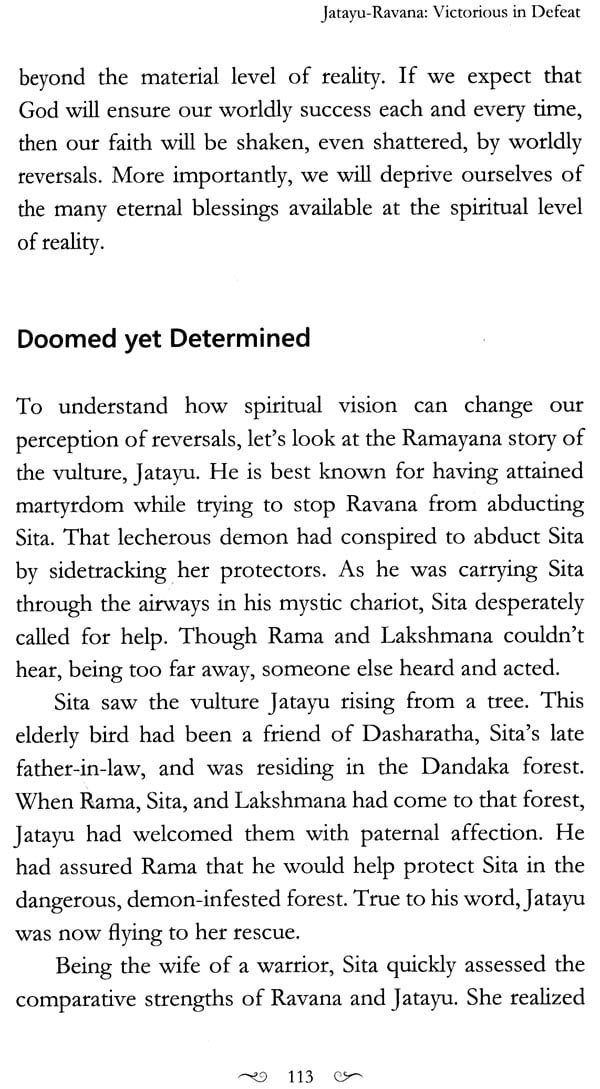 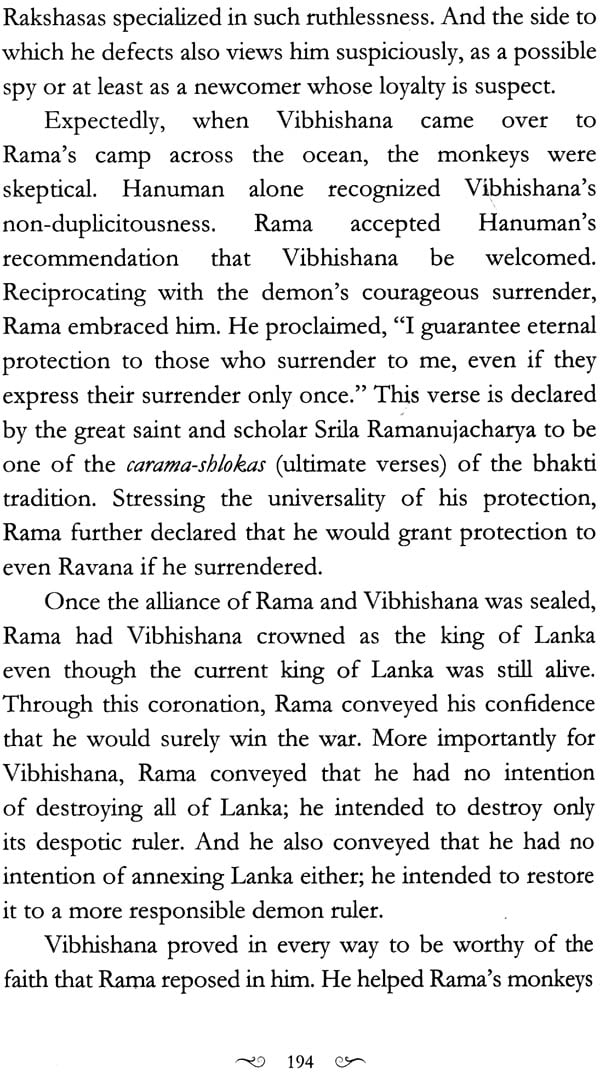 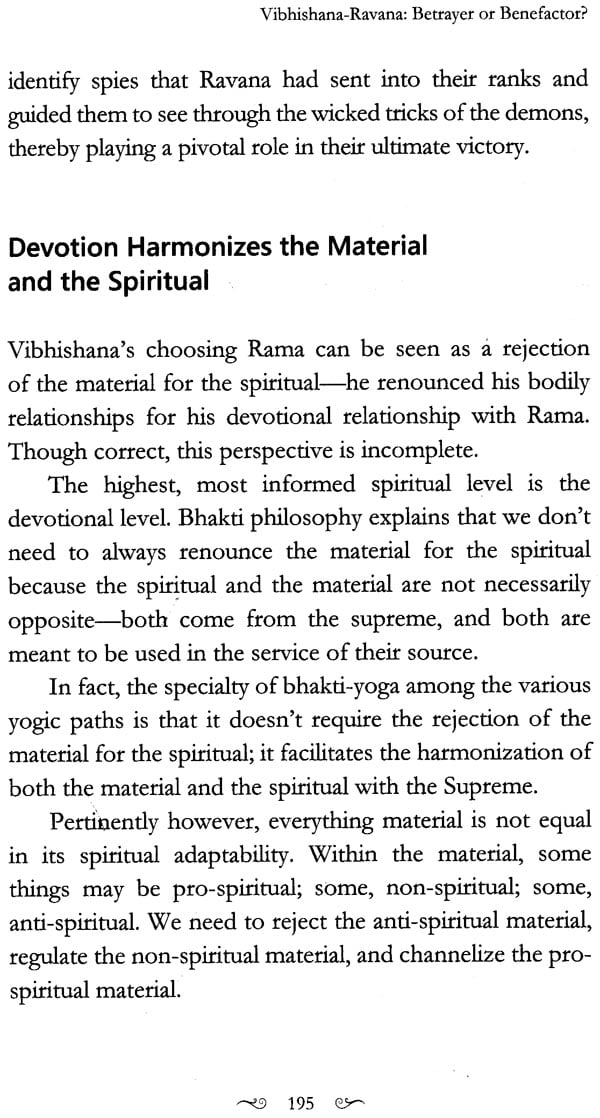