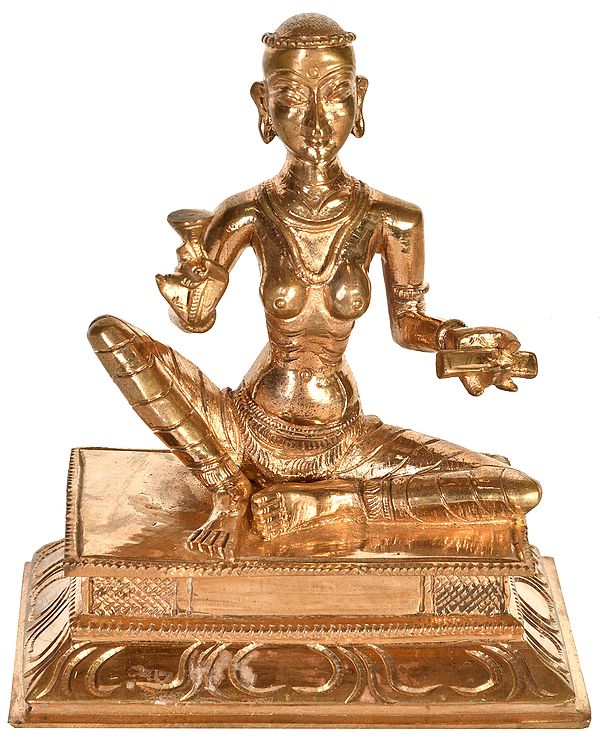 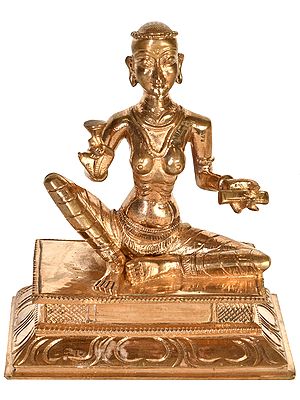 $399.00
Ammaiyar, a sixth-century South Indian Shaiva poet-saint was born in Karaikal, south India. Named Punithavathi, right from childhood she had great faith in Lord Shiva and worshipped Him daily chanting ‘namhshivay’ several times daily and took care of the devotees of Shiva coming to her village. As a young girl, she built a Shiva Lingam in sand, stunning people. Soon after marriage, her husband realized that his wife was a divine person and began to call her ‘Ammaiyar’ (mother). As he could no longer treat her as his wife, he left her & married another woman. Shiva, granting her wish freed her from all her worldly nuisances, including her famed beauty. She was now fierce-looking into the form of kali and people began to pray to her. Once Shiva asked her to visit him by hands-on Mount Kailash, she did it with great devotion, and became extremely popular; it is associated with Karaikkal Ammaiyar to this day.

This lustrous heavenly statue made in shining Panchaloha (also known as Panchadhatu) - Bronze by the Swamimalai artisans. She is depicted here in her shrunken state as seated in devotional Pose on a heightened pedestal, singing hymns & vyakhyans in Shiva’s praises, accompanying herself with a pair of cymbals in her hands, wearing a bhaktimala in the neck and a cap on the head.

She delighted in devoting her life worshipping shiva, writing, and composing hymns in praise of her Lord and beating time with her cymbals. Her hymns celebrate Shiva’s predilection for cremation grounds and his wild dancing form as Nataraja.