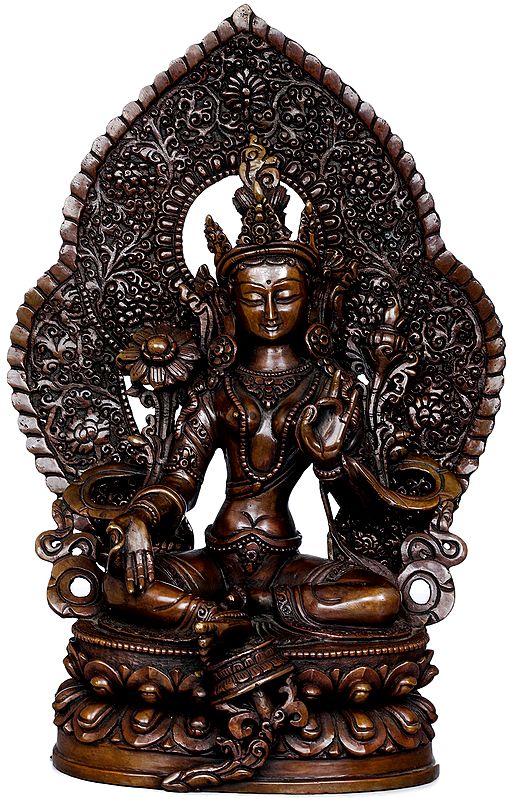 FREE Delivery
Only 1 available
$566.25
$755
(25% off)
A stately Bodhisattva, seated under an aureole of luxuriant vine. Her long gracious limbs bear the dharmachakra mudra (gesture of existence as a cycle); one foot rests on the belly of a miniscule lotus growing along the midline of the wider lotus pedestal She is seated on. This is the identifying aspect of Devi Green Tara, one of the finest Bodhisattvas of the Vajrayana pantheon. The murti of Her that you see on this page is sculpted from copper, a specialty of Nepal’s sculptural tradition.

Devi Green Tara is steeped in yogic contemplation or samadhi. In its profoundest recesses She teeters on the verge of Enlightenment, but She withdraws for the sake of Her mortal lovers and devotees. Her chhavi (image) conveys no less - a relaxed, wide-set brow; large, gently shut eyes; and a compassionate mouth. Framed by the traditional five-spired crown and kundalas that reach all the way down to the clavicles, it is a face of striking beauty and serenity.

The aureole that surrounds Her super-slender form is breathtakingly beautiful. A perfectly symmetrical silhouette, densely executed engravings a hallmark of considerable skill on the part of the artisan. It is symbolic of the lush verdure of certain reaches of the Himalayas, where legend has it that these deities reside. The deep brown monotone of the composition adds to the solemnity of its mood.