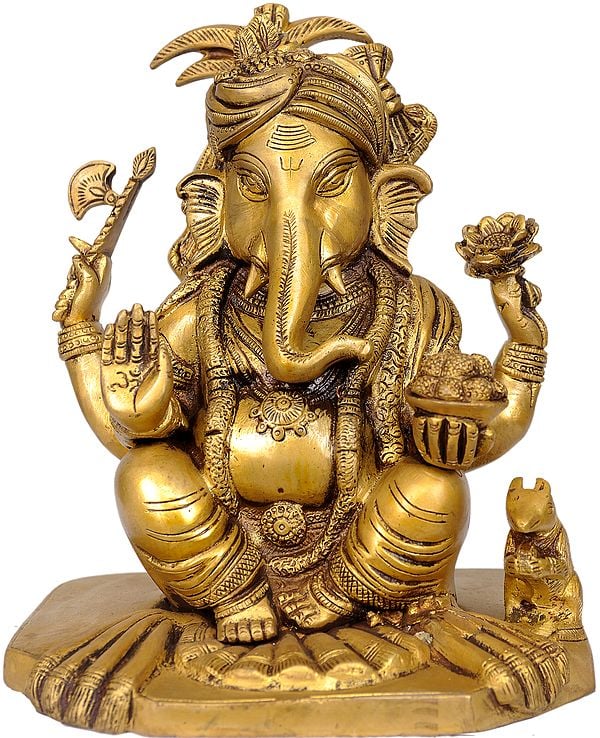 $270
Quantity
Notify me when this item is available

Free delivery
This extremely lovable form of Lord Ganesha, a brass-cast four-armed figure but so uncommon in its visual effects and aesthetic quality, represents Lord Ganesha in a typical head-dress, a turban elaborately adorned with different styles of crests suggesting strange dimensions – visual or mythical, however remote. Apart, synthesizing some of the classical elements as evolved in Ganapati’s iconographic traditions since earliest times, this four-armed form seems to be a pleasant stretch of imagination conceived for presiding over in person the performance of a wedding’s rites, perhaps a traditional Rajasthani marriage. As prescribed by Lord Vishnu himself at the time of his birth, no ritual would accomplish and bear fruits unless it first invoked Lord Ganesha. Marriage-rituals have been ever since obviously the foremost of them.

Since ages, even when Rama wedded Sita, Ganapati-worship preceded marriage-rites. The elephant god was invoked, invited and installed in the ‘vivaha-mandapa’ – marriage-pavilion, to grace the occasion by his presence and accomplish the marriage rituals without obstruction. Broadly, those invoking him believed that by his divine presence he would purge the venue and presiding over the rites let them accomplish detriment-free. This abstract divine presence seems to have been concretized in this image into his personal presence represented iconically. However, committed to his own conditions the artist chose attiring Lord Ganesha suitably to a marriage-like splendid occasion. Unlike his usual helmet-type headgear, often a tall strong crown, the image has been conceived as wearing a turban, as wear males of both sides, especially in a marriage in the Rajasthani style, with curiously designed garments and ornaments as would suit a festive occasion, a marriage being its ultimate.

Except his rich, gorgeous and majestic turban of massive size, its brocaded ends covering his neck and large part of the back, other articles of his ensemble, ‘antariya’ and ‘uttariya’ – the lower and upper wears, are largely common to his imagery; however, in the richness of their yarn, embellishment and a size so large that its extra lengths suspend below and spread around his ‘asana’ – seat, obviously speak of the festive occasion. His ornaments, particularly the massive garland, girdle with a large buckle, and neck-ornaments, one with a large dominating pendant, too are lavish and rich. Except a battle-axe to ward off evil forces and protect the marriage he does not carry any other of his usual weapons. As the occasion required, in one hand he is holding a lotus, the symbol of fertility and accomplishment, the basic objectives of a marriage, a tray of ‘modakas’ – laddus, symbolising abundance, and the fourth is held in ‘abhaya’ assuring bliss and freedom from fear and everything untoward. Interestingly, he is accompanied by two mice, not only his mount, as on a marriage-like occasion they could expect a warm welcome and enormous and lavish food. He has his trunk turned unusually to right, perhaps his seat being on the bride’s left, the usual place of the presiding priest, and hence this position of the trunk.

The turban that Lord Ganesha is wearing itself is highly stylized. Besides its fabulous beauty it seems to reveal some meaning. The twisted knot-like the right half of the turban denotes collecting and storing oceans of knowledge that Lord Ganesha represents. The left half, streaming further leftwards, suggests its free outflow. This left half has been adorned with a knotted ribbon like motif resembling a butterfly, the usual way the hair of school-going girls are dressed suggesting perhaps that all learning streams out of him. Atop the right half, besides a triply conceived set of floral ornaments there is a twin motif looking like two leaves as also a pair of peacock feathers. There is behind this leaf-form a motif resembling flying birds, the central component between their wings-like form having the appearance of a multi-hooded serpent, all conjointly suggesting that all worlds – nature’s, birds’, vipers’ …, are contained in the divine form of Lord Ganesha.