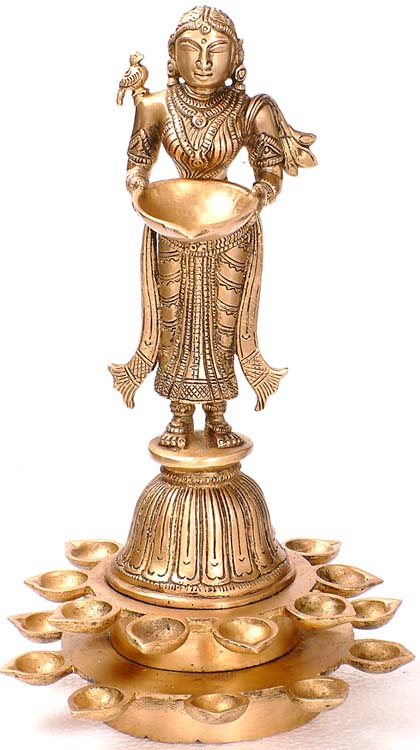 $210.00FREE Delivery
Usually ships in 10 days
Notify me when this item is available
A lamp is known as 'deepa,' in Sanskrit. Deepa literally means that which clears or dispels darkness. A ritual lamp is believed to dispel not only the outer darkness but also to kindle the divine light in ourselves, casting away the darkness of ignorance. Indeed, the lamp has served the cause of Indian rituals since time immemorial. Over the ages the simple earthen lamp transformed into elaborate ornamental lamps, which began to be crafted combining a powerful spiritual essence with a beautiful physical aesthetic.

The Goddess of prosperity, Lakshmi, too became associated with the lamp. There is an interesting legend behind it:

Once Lakshmi was traversing the skies on a dark night when she observed a tiny ray of light amidst the ocean of darkness. Curious, she approached its source and came upon a small lamp burning in a hut and emanating radiance all around. The goddess was extremely pleased to know that the lamp was there to propitiate her. She, then and there, bestowed prosperity on the person who had lit it. Thus developed the icon of Deepa Lakshmi where the goddess is shown holding a lamp in front of her, the hands cupped in the anjali mudra. The purport being that Lakshmi herself is the light that dispels away all darkness from our lives. Such a lamp, in addition to serving the ritual needs of a puja, brings auspiciousness and prosperity all around.

Here in addition to the lamp in her hands, there are twenty smaller lamps set in two layers in the base. Lakshmi herself stands upon an inverted lotus pedestal. 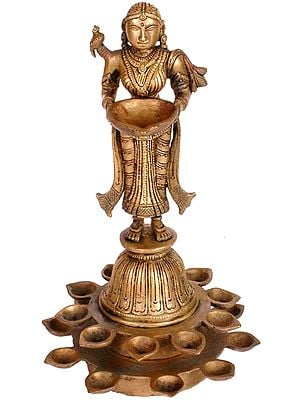 Sadhana [A Text Book of the Psychology and Practice of the Techniques to Spiritual Perfection]
By Swami Sivananda
$36.00
FREE DeliveryBestseller

Sadhana [A Text Book of the Psychology and Practice of the Techniques to Spiritual Perfection]
By Swami Sivananda
$36.00
FREE DeliveryBestseller