Facets of The Puranic Wisdom

The present book 'Facets of Puranic Wisdom' is a compendium of about 30 research articles on the Puranas by Prof. Pushpendra Kumar. Articles in English section are about twenty and in Hindi section are about eleven. In English Part, there are four sections. The vedic Impact, the social and Political ideas. The Philosophical ideas and Saktism in the Puranas, The Puranas .are very important sources for ancient Indian religions, society, culture and history. The articles reveal philosophy of India, different aspects of Ancient Indian Society and the lores of India. It is like the churning of Puranic ocean to find out the valuable gems for the welfare of the society. We are very sure that the book will really be helpful for the deeper under standing of the Puranic wisdom and encourage the scholars to do further researches in the field.

Prof. Pushpendra Kumar has retired from the University of Delhi-Sanskrit Deptt. after serving it for more than forty years. He served this Deptt. as lecturer, Reader and Professor and Head of the Deptt. More than 25 books are highlighting his acadmic merit. He has written more than -seventy research articles. He has travelled widely in the European Universities for higher studies and lectures. Besides many honours and awards. He has been honoured by the 'Certificate of Honour' by the President of India in the year 2000 for his meritorious service for Sanskrit and for his scholar-ship. He specializes in the Puranas, Tantras, Buddhism, Indian Art, Epigraphy, Sanskrit Literature and Aesthetics. He is presently working on a major project 'Cultural Heritage from the Puranas' in ten Volumes. During the year 2004 four books have been published.

The Puranas are the important sources of Ancient Indian religion, history, art and architecture, sociology, festivals geographical knowledge and national integration. After the Vedas, the Puranas are respected by the masses of lndia. These are the store- house of stories, myths, pantheon, similes, and the symbols. This is a vast literature containing of about 5 lakh verses in the Mahapuranas as well as the same number of the verses in the upa-Punanas and Aupa- Puranas. By the Modern scholars these are considered to be the compilations by different editors and in different periods. But All the Hindus unanimously agree in the name of Vyasa or Vedavyasa as the author of all the Puranas. Vyasa taught those to his disciple Lomahurshana, Sura, who in his turn recited these to various people, Kings and the sages gathered at Naimisharanya. The Puranas advocate [he Vedic religions and they follow the Vedic framework of Indian ritualism and Social system of Varnas and Ashramas. Though they teach their independent religion, worship, devotion, pantheon, ethics and Philosophy but they give stress on vedicism saying आत्मा पुराणं वेदानाम् The present book contains about thirty articles written by me from time to time on the different topic and aspects of the Puranic religion, Philosophical ideas, Nationality and devotion to god. In English section first part 'Vedic Impect ' I have discussed the importance of Rgvedic Khila Sukta i.e. Shri Sukta. It gives us the most ancient concept of Laksmi. The Puranas have given utmost importance to this Sukta for worshipping Shri Laksmi. In each/every ceremony asking for the increase of weal the, Sri-sukta is to be recited. In second article I have discussed the concept of Rgvedic mother goddess Aditi, mother of all, mother of gods. She is praised as the most powerful deity specially among the feminine deities. It gives us the mother goddess concept. The second goddess of importance in the Rgveda is the young maiden U shas. She is the beautiful girl of young age and

Facets of the Puranic Wisdom

bright bride who illumiens this whole universe. She is brave and kind- hearted lady. Both these vedic deities give us an insight to consider that the concept of Goddess Durga was conceived as a maiden goddess and as the wife of Siva-auspicious, keeping in mind the invinsibility of AditI and fast mobility of Us has, both combined in one concept of Durga. Ushas dispels the darkness while Durga destroys the demons. Then in the third article 'Dharma in the Puranas' discussion has been made about the nature and importance of the Dharma-specially the vedic concept of Dharma and Rta. It supports the Puranic saying 'इतिहास पुरानाभ्यां वेदं समुपवृहंयेत It is only the Puranas which try to explain the symbolicism of vedas. It gives us the understanding of the underlying current of Vedic Dharma including Rta. The Puranas also help us to go deeper into the vision of Dharma of the primordial period, of the people of the hoary past.

In the second part' Social and Political Ideas' I have dealt with the social aspect of the Puranic wisdom. The Puranas have a vision of whole of India as a single unit. Though ruled over by the various kings and cheiftains it is only one unit, and they gave us a concept of Emperor (चक्रवर्ती सम्राट). The emperor should have a capacity to rule and govern whole of the country and solve the problems of the rulers of the states, as well as should have a vision like Prthu and Raghu to make the state a welfare state and work for the welfare of the mankind or masses. The Puranas had an idea of the vastness of this sub-continent named Bharat inclusive of the Himalayas, its mountains, oceans, rivers, forests, people, cities and villages.

उत्तरं यत्समुद्रस्य हिमाद्रेश्चैव दक्षिणाम। वर्षं तदभारतम नाम भर्ती यात्रा संतति : विष्णुपुराण || The next article is 'Inter-state relations In the Puranas '. Generally modern scholars say that the Indians were not having political bent of mind. They never thought of India as one unit and there were no principles of International or inter-state laws. But it is not so, the Puranas give us the lots of material for the inter-state relations in ancient India. The concept of sovereignty and the states of non-sovereign status have been discussed here. How to behave with other kings and rulers, ministers, ambassadors is given in detail. But [he Puranas present all these matters not in Shastric way but in a practical manner.

What should be our social behaviour with fellow-beings is discussed in the next article. Our culture is synthetic, so impect of this can be seen on our behaviour.

आत्मन: प्रतिकूलानि परेशां न समाचरेत | Whatever you don't like for yourself should not be done for others also. This is the motto of Puranic social behaviour. Next comes the social justice and Dharmaraja concept in the Mahabharata and the Puranas. These texts give us the varied picture of welfare state. The king is made for the governance" and welfare of the people and nor for his personal marrymaking, though in life it may be like that. The Shastras give us a principle that king is there in the state for the protection and welfare of the subjects. राजा प्रकृति रंजनात while they preach to the masses that king is like a divinity लोकपाल. He should not be disobeyed. When both, the king and his subjects work in harmony then only the state will flourish and become powerful. Next two articles are' Bhagavata' s Relevence to Modernity' and 'Visnu Purana's impact on society' are very important for utility to modern day society. The Puranas are not very strict in the observance of reiligious or social rules, but they preach that the good actions should be followed. Without the purity of mind and will to observe the rules (he social structure will break down.

आचारहीनं न पुनन्ति वेदा: Thus the importance of good conduct along with the purity of mind and good social behaviour is emphasized throughout the Puranas. The last article is on Koumudi Mahotsava/Vasantotsva in the Puranas. These two Utsavas are generally celebrated at the change of season i.e. spring season and the autumn season for the Worship of Kama or Laksmi.

It is discussed that Kamadeva, the God of love when disturbed the Samadhi of Siva, He was burnt to ashas by the fire emerged from the third eye of Siva. Though Karnadeva is called a god and utsavas are arranged in his respect but he has to be inhislimts. Siva has no enmity with Kamadeva and ultimately revives him. It preaches us that love making or marry making is very .good for the life but it should be within the limits. In the spring season the Utsava is called Vasantotsava and in (he autunumn season it is Kaumudi Mahotsava. The famous Rasalila by Krsna was also celebrated on the Sarada Purnima day. 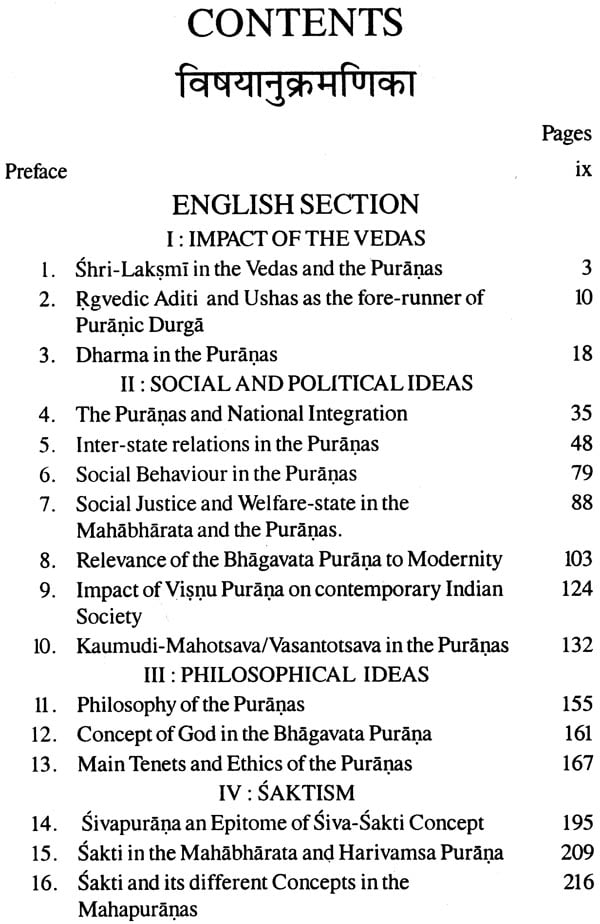 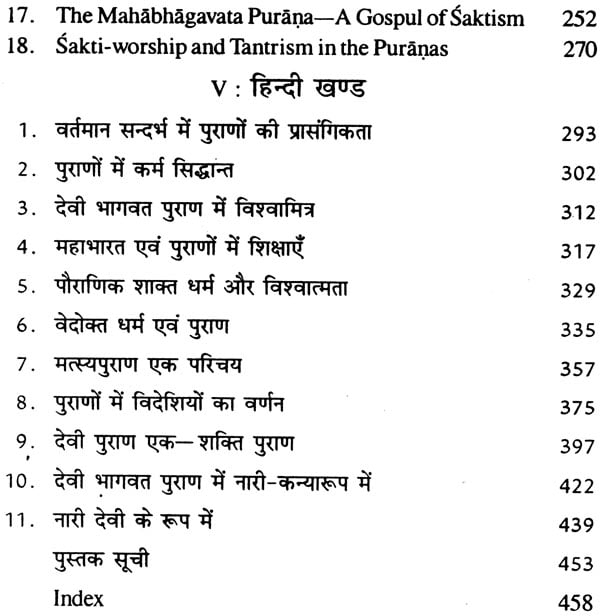 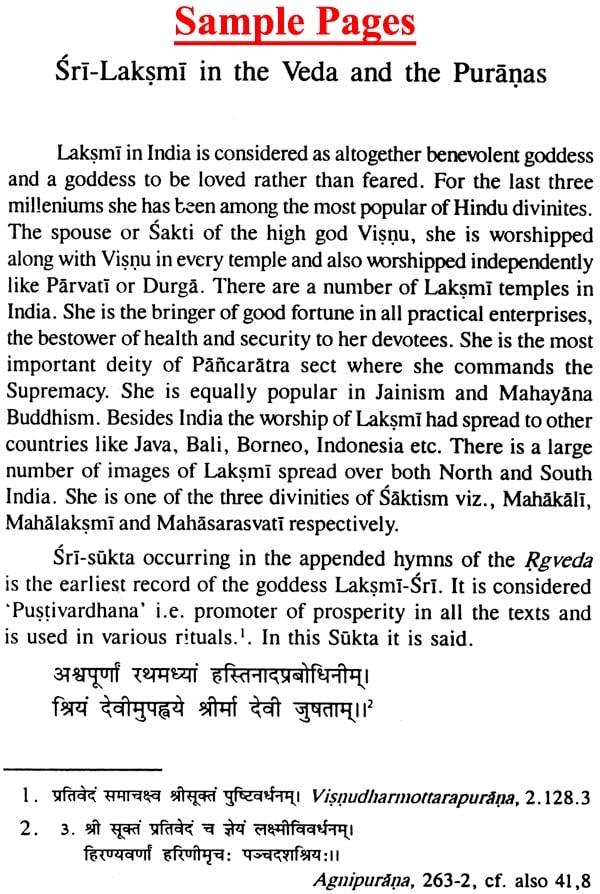 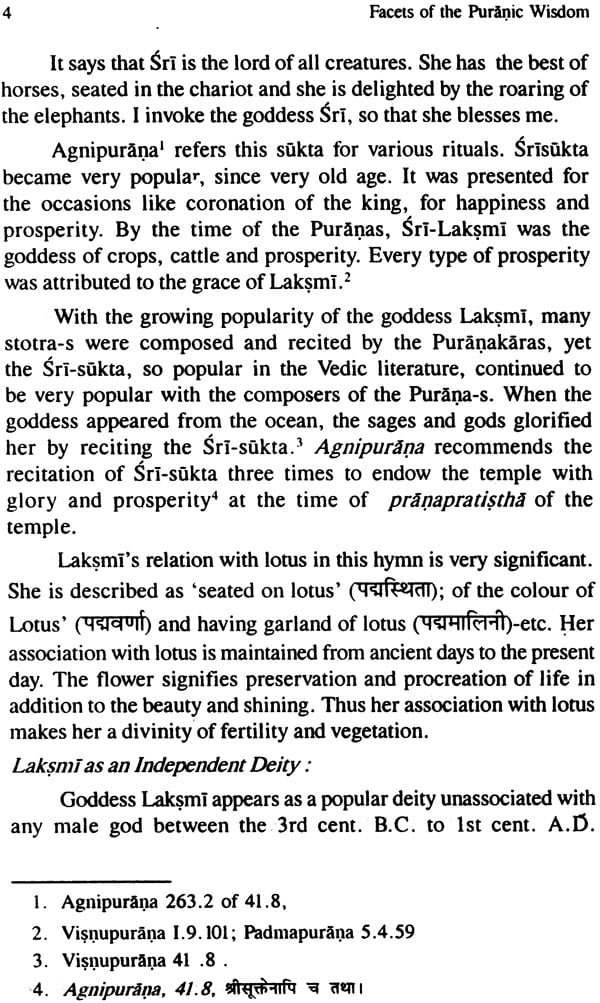 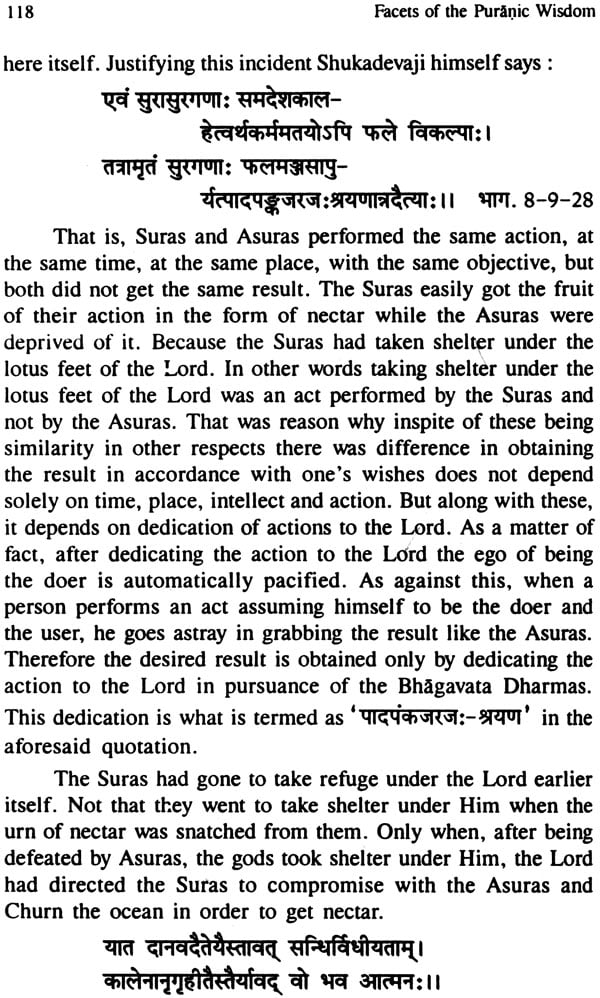 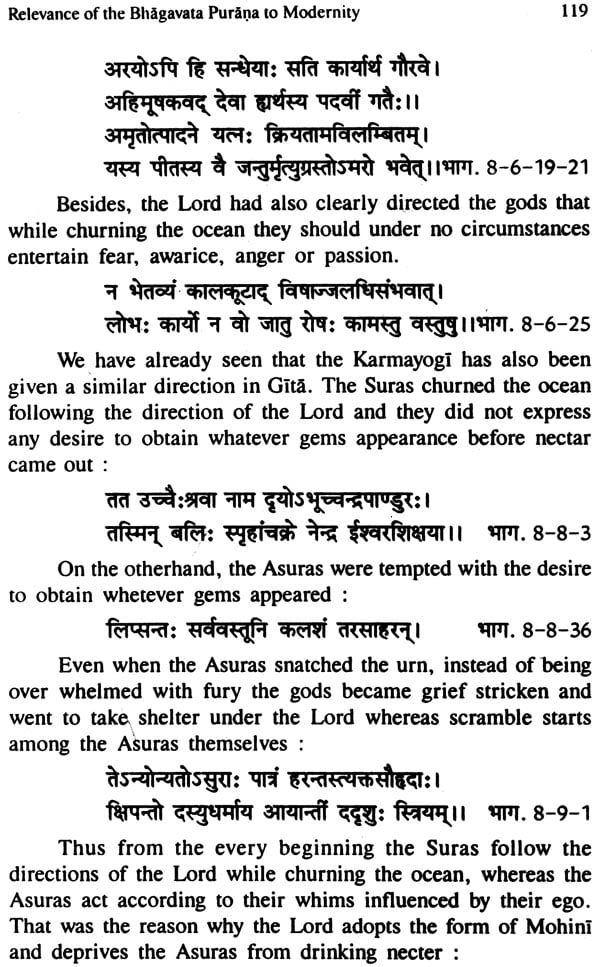 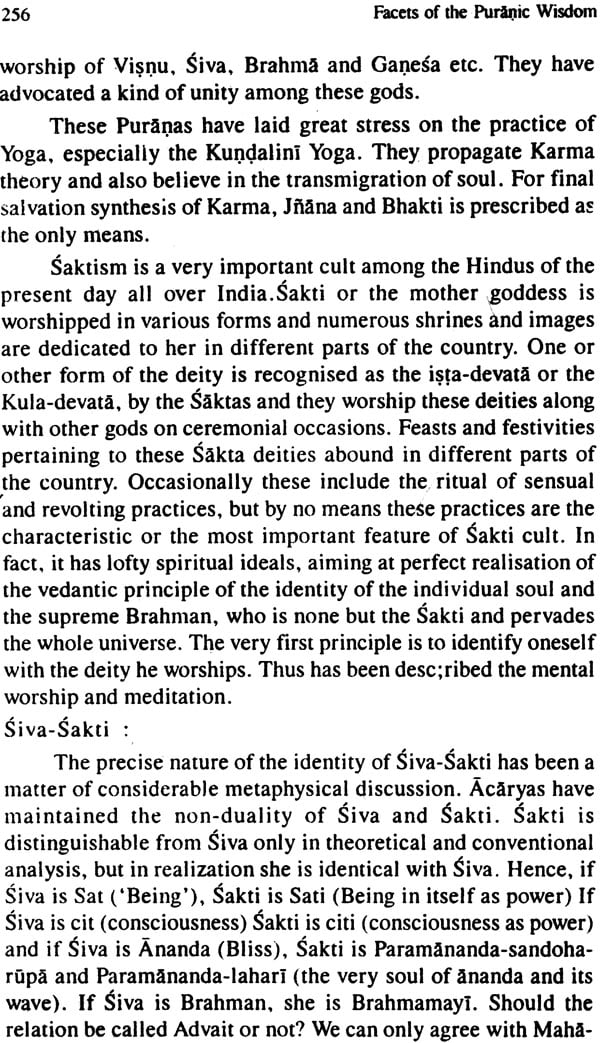 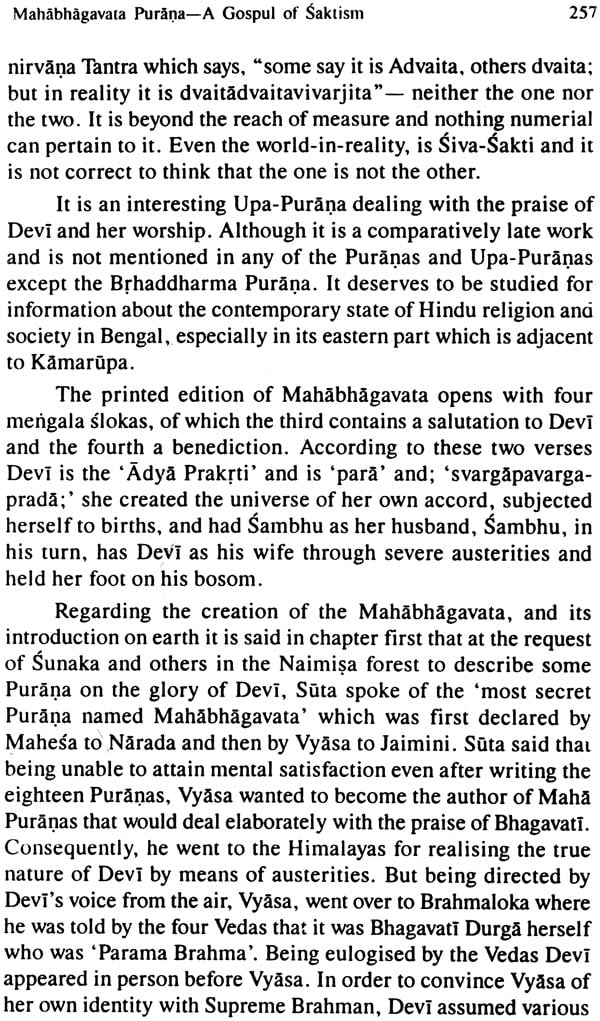 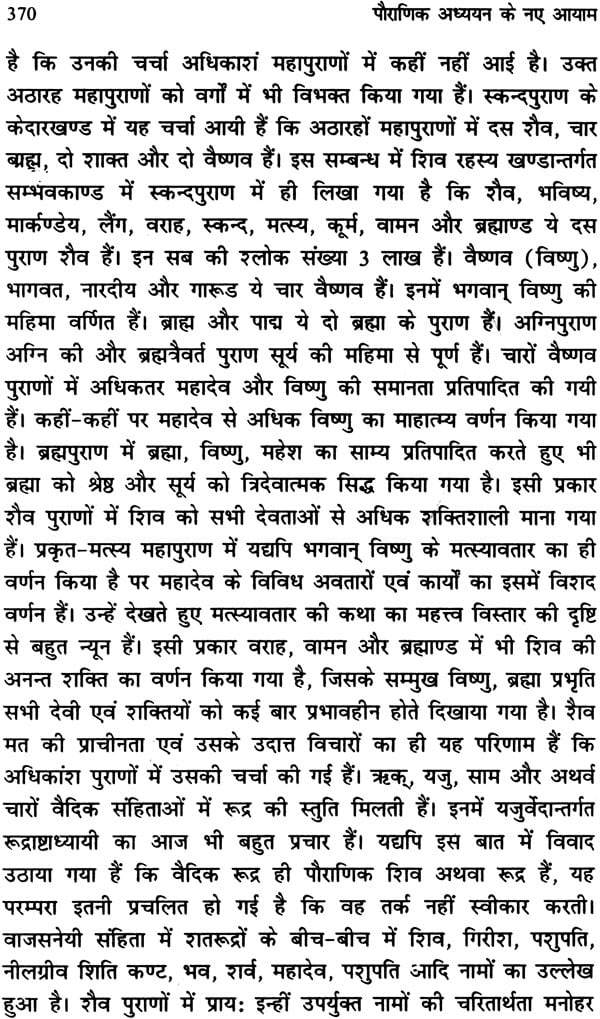 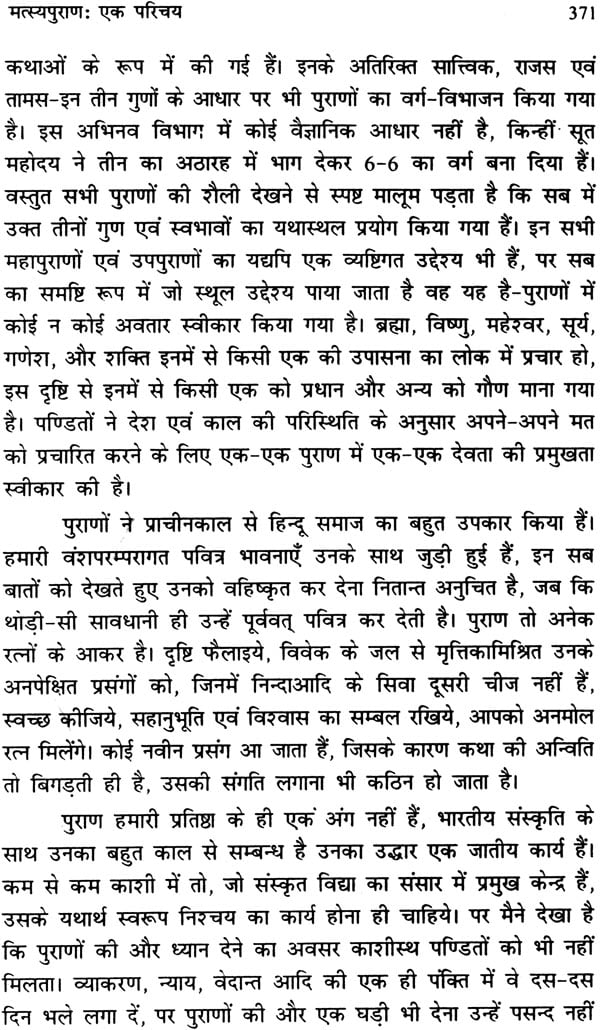 The Classic Wisdom of Srimad Bhagavatam
By Swami Gurudasananda
$16