Dr. R. Krishnan dedicates this book on the Ramayana to his parents –from whom he imbibed his love for the epic. Dr. Krishnan is a scientist but his laterly effort is an attempt to transmit his passion for the story to younger, more questioning minds, who might query what they regard as elements of fantasy in the narrative. He aims at the young Indians growing up abroad, and even those in India who may not have had the benefit of developing a love for the great quests that have marked Indian culture through the ages. He seeks to provide a practical base for a better understanding of the epic and particularly whether it reflects a high level of scientific and technical knowledge prevalent at the time.

Dr. Krishan has built an enviable reputation as an outstanding scientist working in France for 5 decades. He came to Paris from the National Physical Laboratory in Delhi in 1960, and rose to be Director of Research at CNRS, making brilliant contributions to his chosen field viz; magnetism and magnetic materials. He has retained academic links with scientific institutions in India and remains rooted in Indian Culture. The search for a better understanding of the Ramayana responds to a deeper urge for a greater connection to the epics which have given a cultural background to the Indian people and created, as Pandit Nehru said, a "picture gallery" in their minds.

Dr. Krishnan places the opening of this picture gallery, to between the 11th and 5th millennia BCE. He then cities evidence from the story to dismiss the notion that knowledge of planets and astronomy could have come to India from the Greeks. He brings up questions about methodologies as well as descritptions of machinery and products of technical knowledge implied in the narrative. The queries run through the entire story, asking us to take a fresh look at the material enviroment of the times.

Does he succeed? Readers will have to asses this for themselves. In my readings of the manuscript I found that Dr. Krishnan's annotations raise more questions than answers. This is surely intended, and I am confident the author will be happy if his book provokes further scrutiny.

He does succeed in persuading us that his endeavour is a labour of love, which connects it to all who have interest in the history of our ancient land and the beliefs that have bonded Indian people from ages past.

Being in France I Cannot but recall Nehru's tribute to the beauty and the profundity of the epic, in the quotation of the French author Michelet, who wrote in 1864, with the reference to the Ramayana; "Let me look towards lofty Asia and the profound East for a little while. There lies my great poem, as vast as the Indian Ocean, blessed, gilded with the sun, the book of divine harmony, wherein there is no dissonance. A serene peace reigns there, and in the midst of conflict an infinite sweetness, a boundless fraternity, which spreads over all living things, an ocean of love, of pity, of clemecy."

Ramayana and Mahabharta are called The Itihasa. Itihasa in Sanskrit literally means 'it happened thus'. So these are to be distinguished from the Puranas. Ithihasas were composed or written by those who witnessed what was happening so these are historical accounts. Valmiki lived during Ramayana is in the form of poetry and is of great beauty. It is considered as the world's first poetry.

There are also several books on Ramayana in various languages. The Ramayana (and also Mahabharta) in English by are well known. So what is the need for an amateur like me to venture and write about Ramayana?

The incident which led me into writing this book is as follows. In September 2008 I happened to lay my hands on 'Valmiki' Ramayanam', sixteen volumes of it, which my father used to read daily during his prayers (Ramayana Parayanam) for over twenty years. I have heard him reading it over and over again and going in raputres about it which made me wonder. He used to tell us that all modern inventions existed already in those ancient times. I have also litened ever since my childhood to scores of discourses on Ramayana by Pundits but I never had a clue of what modern invention or knowledge existed in that period. It is known that the ultimate goal of a man is to get out of the cycle of birth and death and this spiritual pursuit to understand the Paramantra or the Eternal Brahman forms the basis of the studies of our Puranas and Itihasas. So no special attention is paid generally on details which are rather 'terre a terre'. Though this is understandable, in my humble opinion this is not really justified because our seers had realised so much in the hoary past. Our ancestors questioned where the Universe came form and how it functioned. They knew Mathematics, Medicine, Geography, Astronomy and Astrology and so on. This was a time when most of the rest of the world lived in total ignorance. I feel that it is our duty to reveal this to the younger generations or else it could develop into a sort of inferiority complex and one is no longer proud about one's own country. Further more this lack of knowledge of our past acheivements could also seriously impair our progress. Therefore I wanted to read for myself and bring out these aspects that could be found in our Itihasas. I would like to caution and say that one should not also over do it and say that everything originated in India.

I am a scientist by profession and hence the type of treasure that I searched in Valmiki's great work and my view of things could be somewhat different and perhaps be of interest. I decided to find out for my self such details.

I started reading all the volumes of 'Srimad Valmiki Ramayanam' by Late Rao Sahib P.S. Krishnaswami Iyer of Mylapore and edited by M.N. Ramaswami Iyer. It was published by Ramayana Publishing House Publishers, 321, Thambu Chetty Street, Madras-1 in the Period 1956-61. This work is a word by word translation in Tamil from Sanaskrit. It is of interest to note in passing that each volume was priced at Rs. 5. I read with great interest and it was indeed a discovery for me. I personally derived a great deal of peace and happiness in having spent several months reading this great epic of Valmiki.

I read the Tamil translation carefully and also those verses in Sanskrit which described some interesting details in order to appreciate (useing my limited knowldege of Sanskrit) the translation better. Though I have closely followed the above work, in certain instances I also consulted the translated of a few others in order to get a balanced view. I was very much impressed to find so many rich details and interesting information on several aspects of Tradition, Culture, Astronomy, Geography and so on and which are not generally talked about. Valmiki's deep knowledge of Astronomy and Astrology is amazing. I was surprised to discover that iron was already in use in Ramayana period for the use of iron and also claim that the knowledge of planets came to India from the Greeks!

This book of mine is of course an abridged one because I have concentrated only on certain details. I have been research scientist and therefore I tried to analyse these details as far as possible with a 'rational mind' and have highlighted them in this book. The readers will find them in italics. I have taken care to analyse these details by consulting also the works of others where available.

True that there are some instances in Valmiki's work where one cannot apply normal reasoning. For instances the number of years, the distances between places, and the number of people and so on (ex. Rama ruled for ten thousand years or number of people which could run into millions etc). Despite all these I think that the younger generation and particulary those who are born and raised abroad and surely those who are also in India should be aware of the rich details found in the work. It is amazing that in the period of Ramayana some 7000 years ago there was so much knowledge about so many things. Of course I presume that the version of Valmiki Ramayana that we read now follows genuinly what Valmiki had composed. So how old is this great work as we read it today? It is believed by some that there could have been some interpolations and modifications in the course of time. It is reasonable presumes that these modification or additions were made only to embellish the work and not to alter the basic facts. Indias has had an oral tradition and that is how the Vedas which are older have been faithfully preserved. This is very important and crucial because this would then prove that whatever knowledge in Astronomy that is found in The Ramayana was not borrowed from the Greek as it is generally believed.

Valmiki's descritption of Nature and certain events is indeed not only beautiful from poetic angle but also because they are full of rich details and one has to read them to fully admire. One gets the description of the flora and fauna of that period. I have mentioned such details only breifly since my objectives are different. Therefore the readers who are interested in these details should go through the original version of Valmiki which has over 24000 verses. I hope however that the details highlighted by would be appreciated by the readers and I hope that this also wrote kindle their thoughts to further their knowledge.

After completing my book I came to know about a couple of books on Ramayana written in Maharastra which deal with the calculation of the date of birth of Lord Rama based on astrological and astronomical information. Unfortunately these authors do not concur. In my opinion this is not of utmost importance because Valmiki Ramayana illustrates the noble aspects of human life through the outstanding qualities of Rama. The Dharma such as, speaking the truth, upholding moral values, showing respect for elders, compassion, forgiveness, etc., established by Rama is relevant for all times. The important lesson of course is that one should try to emulate the life of Rama who is the perfect role model. 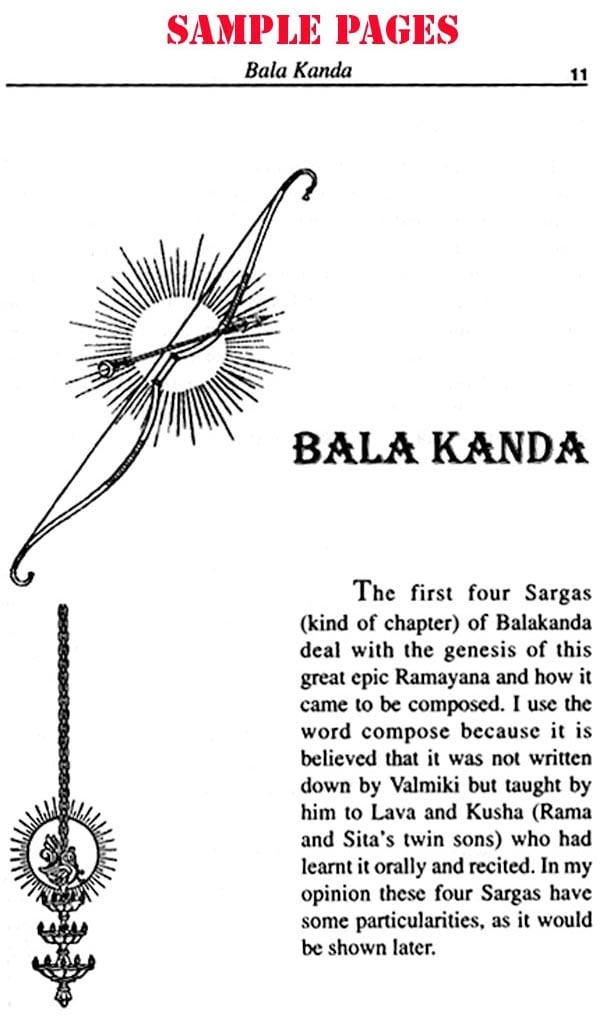 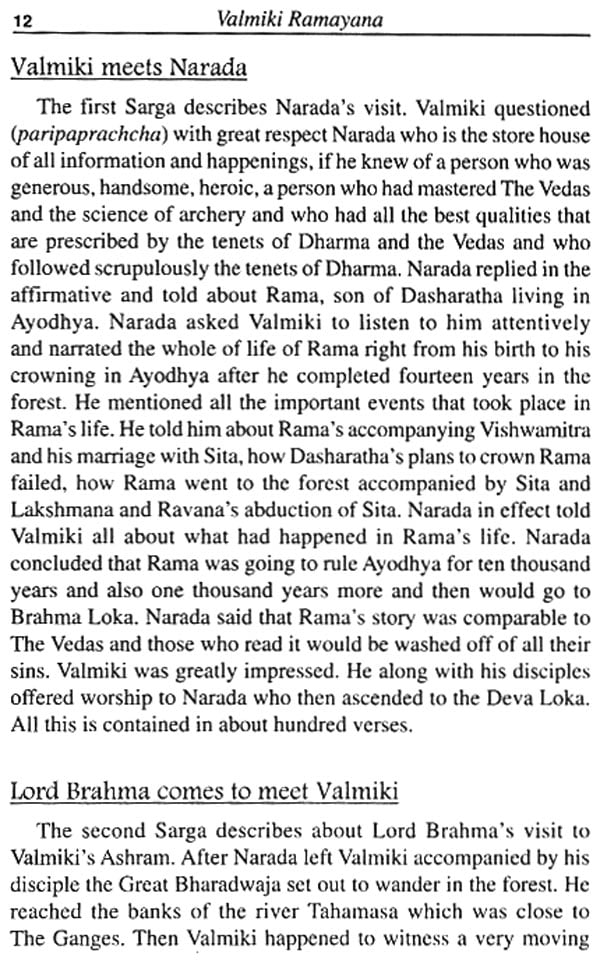 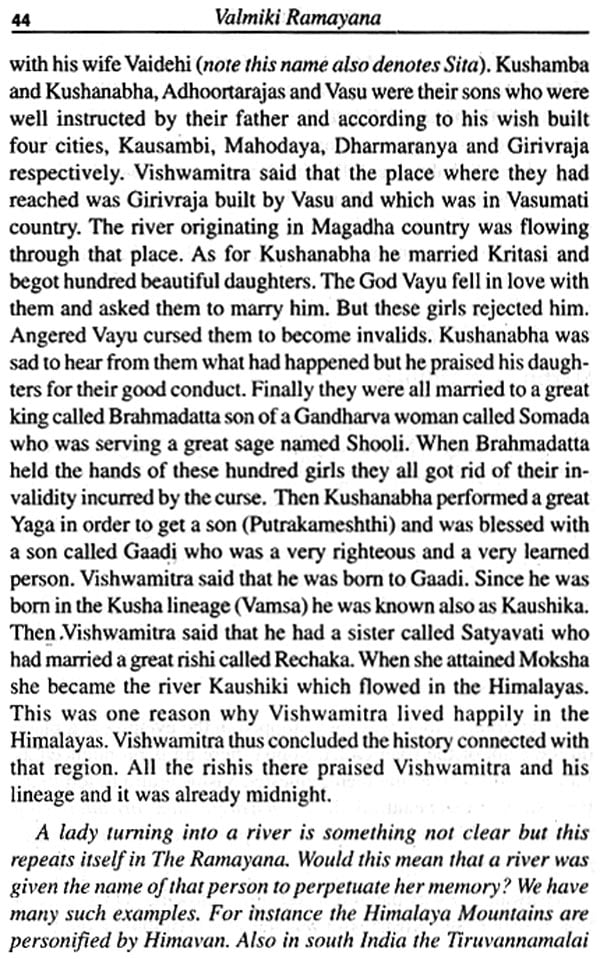 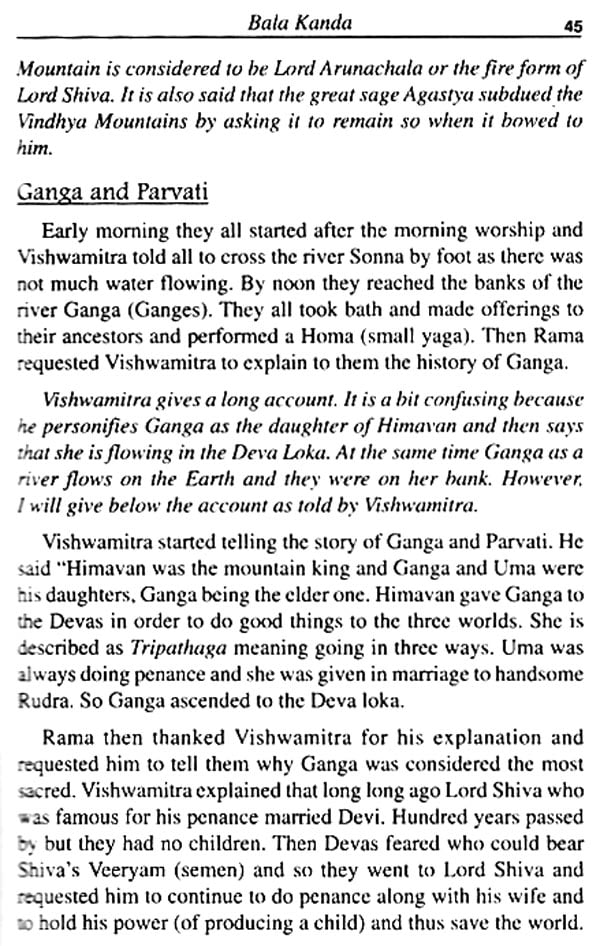 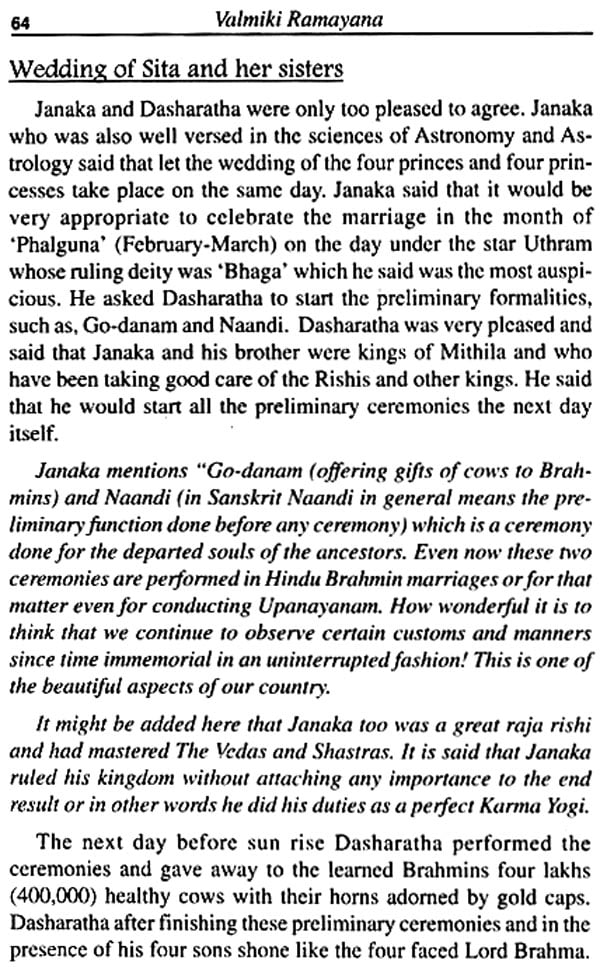 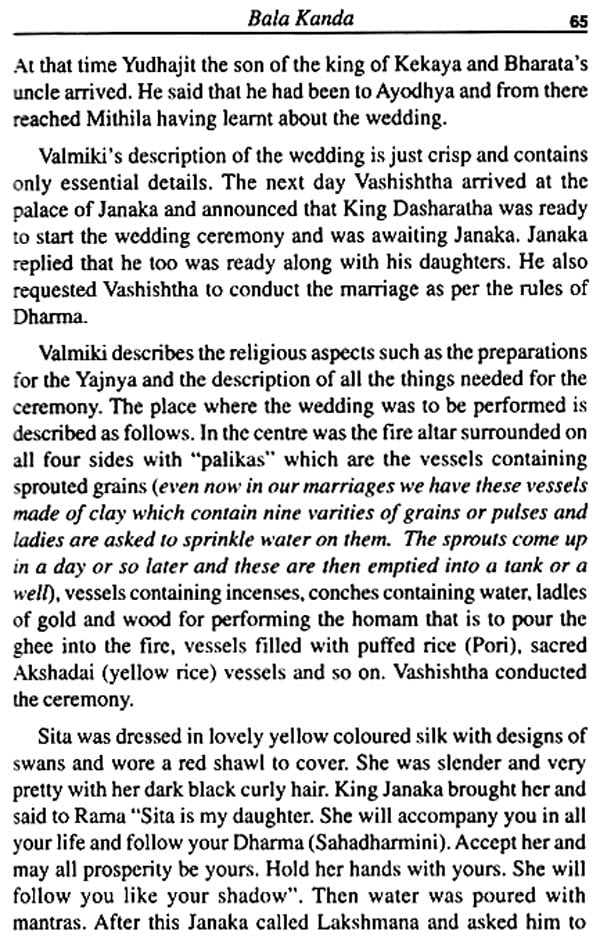 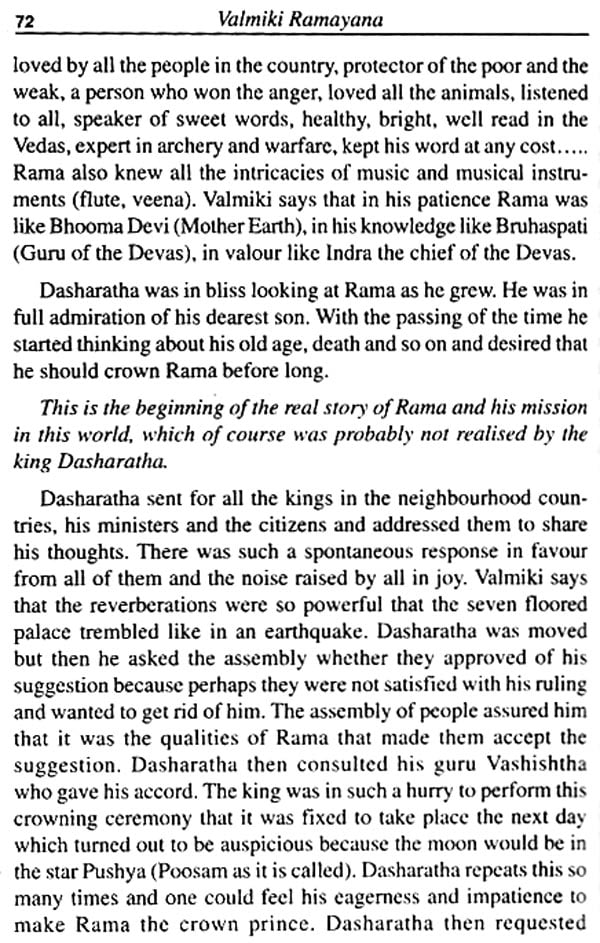 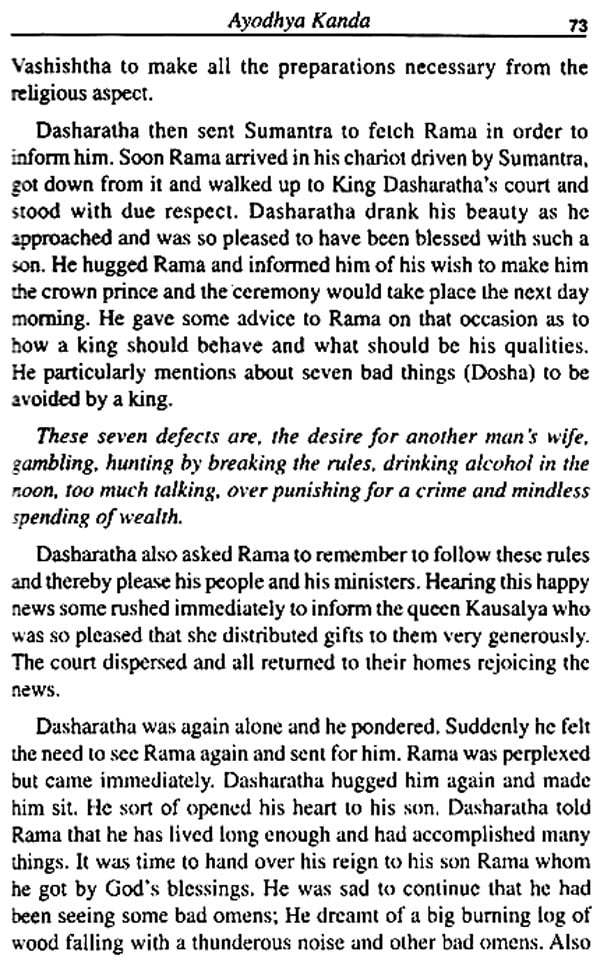 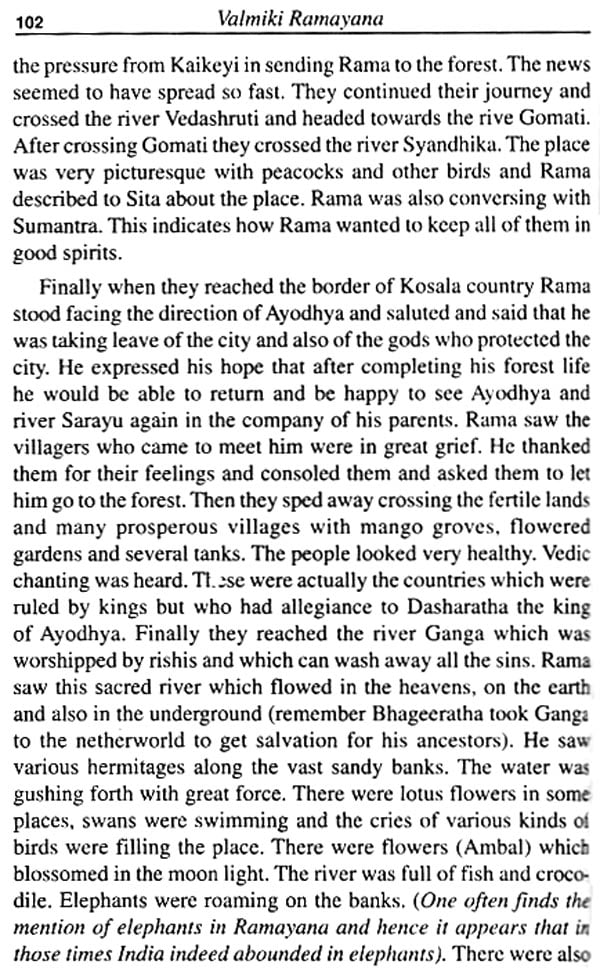 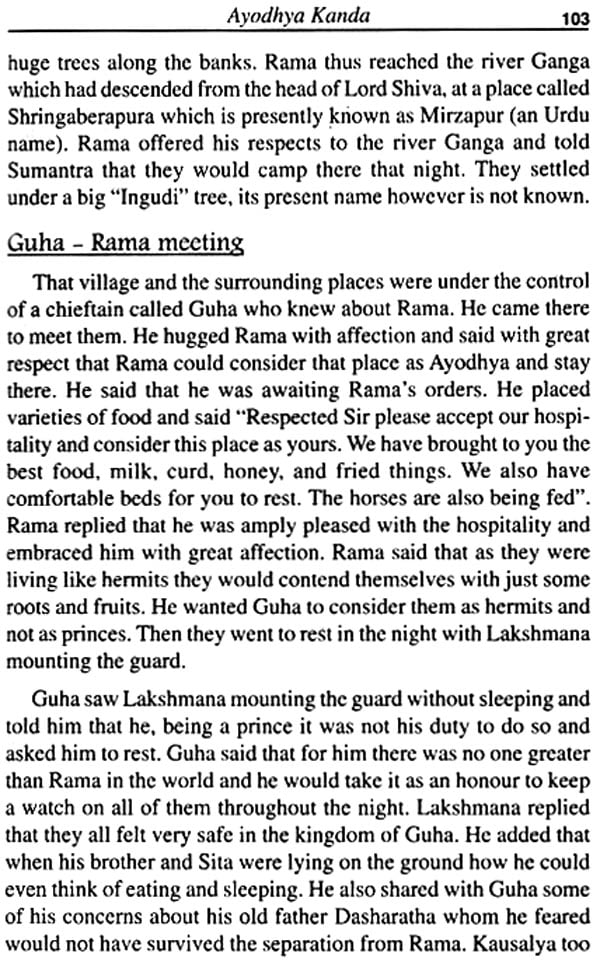 The Concept of Tapas in Valmiki Ramayana
By Anna. N. Subramanian
$11